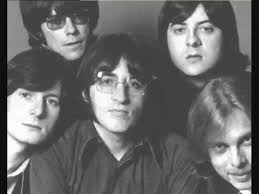 The Five Man Electrical Band was a Canadian mainstream rock band from Ottawa. They had an international hit in 1970 called “Signs.” Les Emmerson was born in 1944. In 1963 the Staccatos were formed in Ottawa. It included lead singer and local disc jockey Dean Hagopian. After some local hits they got the attention of Capitol Records. Other bandmates included Vern Craig on guitar, Brian Rading on bass guitar and Rick Bell on drums and vocals.

Then in 1967 they released “Half Past Midnight”. The song peaked on the Canadian RPM singles chart at #8 in May 1967. It won them a JUNO award for Best Produced Single and got them gigs in the trendy music scene in the downtown Toronto neighborhood of Yorkville. Coca-Cola lined them up for some jingles and they shared one of two sides of an album in 1968 with The Guess Who called A Wild Pair.

In 1968 Vern Craig left the group and was replaced by Ted Gerow on keyboards.

They released a single called “It Never Rains On Maple Lane” which had regional success in Olympia, Washington, (#12), Kirkland Lake, Ontario, (#11) and Top 30 in San Francisco and Toronto. A second single, “Lovin’ Look” made it into the Top 100 in Wilkes-Barre, Pennsylvania, with the band sounding similar to the Grass Roots. But it was their third single release that began to show signs of an emerging sound the Five Man Electrical Band became known for. The refrain, “the sun is up and I’m still down” in the last minute of “Sunrise to Sunset” got the band more attention. With that more mainstream rock sound their third single peaked at #13 in Ottawa, #12 in Victoria and #12 on CKLG in Vancouver.

Several more singles followed. In 1970 the band released an album called Good-byes and Butterflies. The cover of the album prominently displayed a marijuana plant. The ensuing controversy led to the album being withdrawn and given a different cover with a butterfly composed of neon lights. “Signs” was initially the b-side of “Hello Melinda, Goodbye.” But by accident, the sides were reversed, making “Signs” the A-side, which radio listeners started began calling DJ’s for requests to hear it again. In 1971 “Signs” peaked at #3 on the Billboard Hot 100 and in Vancouver (BC).

This was followed by “Absolutely Right”. “Absolutely Right” is a song about a guy who wants to sort out the communication problems with his “mama.” He’s coming back hoping she’ll let him in the front door. He’s promising that he won’t behave the way he used to. Given time to consider how bad he’s been in the past he concedes that she was absolutely right and he was wrong. Maybe, if he can convince her that he’s changed his ways, the two of them can enjoy an evening by the fire, drinking wine, singing, laughing and dancing. Listeners hoped they could work it out too.

In her New York Times article, Why It’s So Hard To Admit That You’re Wrong, Kristin Wong discusses the obstacles to apologizing. She writes “Despite your best intentions and efforts, it is inevitable: At some point in your life, you will be wrong. Mistakes can be hard to digest, so sometimes we double down rather than face them. Our confirmation bias kicks in, causing us to seek out evidence to prove what we already believe. Wong cites studies reported in the European Journal of Social Psychology show that self-esteem can take a hit when people admit they are wrong. People who have done harm and explicitly refuse to apologize can feel more powerful and sustain high-esteem. The studies indicated this has implications for victim-offender reconciliation when interpersonal harm is at issue. Researcher, Tyler Okimoto, said of the studies, “For example, apologizing to my wife admits my wrongdoing; but apologizing also gives her the power to choose whether she wants to alleviate my shame through forgiveness, or increase my shame by holding a grudge.”

In their audiobook, Mistakes Were Made (But Not by Me): Why We Justify Foolish Beliefs, Bad Decisions, and Hurtful Acts, Carol Tarvis and Elliott Aaronson ask: “Why do people dodge responsibility when things fall apart? Why the parade of public figures unable to own up when they screw up? Why the endless marital quarrels over who is right? Why can we see hypocrisy in others but not in ourselves? Are we all liars? Or do we really believe the stories we tell?”

The guy in “Absolutely Right” has done his own self-examination. He’s overcome whatever tendencies he might have to justify his behavior. He’s concluded that the way he was carrying on was “bad.” If he felt threatened by admitting that he might have done something that was screwed up, harmful or detrimental, he’s overcome his aversion to apologizing. Instead of sticking to his guns, he offers an unabashed apology. Not only was the woman in his life absolutely right, she was “right all along.” Likely, many radio listeners could identify with the circumstance. For many, they identified with the guy, recalling a time in their life when they’d made a mistake. But for some radio listeners, they only identified with the person he was apologizing to.

The guy in “Absolutely Right” likely came to the conclusion that he had the power to change his own behavior. At least, this would be the observation that researchers of the study, Who Accepts Responsibility for Their Transgressions?. In the study in the Personality and Social Psychology Bulletin, Karina Schumann and Carol Dweck found individuals chances for apologizing arise when they “view the situation as an opportunity for them to grow as a person and develop their relationship with the victim.”

Several more singles were released including “Juliana” in 1972, and “I’m A Stranger Here” – an anthem to environmental awareness – in 1973. When the single was recorded, the band was made up of Les Emmerson (vocals, guitar), Rick Bell (vocals, drums), Ted Gerow (keyboards), Mike Bell (vocals, drums) and Brian Rading (bass guitar). At the end of the albums production, Mike Bell and Brian Rading left the band, actually making the remaining members a “Three Man Electrical Band.”

The band had one more notable hit called “Werewolf” in 1974. Emmerson based himself in California from the mid-70s until 1981. During this time he launched Perfect Records with the engineer for Bachman-Turner-Overdrive and Pure Prairie League, Mark Smith. When he moved back to Ottawa in 1981 he became associated with The Cooper Brothers, an Ottawa band with a southern rock sound. Emmerson also established  a recording studio in the nation’s capitol.

1986 was the year the Five Man Electrical Band got together to perform a benefit concert. However, the benefit concert led to yearly tours of Eastern Canada into the 2010’s. In 2000, at the age of 56, Les Emmerson suffered a heart attack. Thankfully, a stent procedure was successful. In 2008, The Canadian Songwriters Hall of Fame inducted Les Emmerson, primarily for his composition of “Signs”, a song he was first inspired to write while driving down Route 66.

Update: Les Emmerson died on December 2021 at the age of 77. See Ottawa Citizen article below for details.