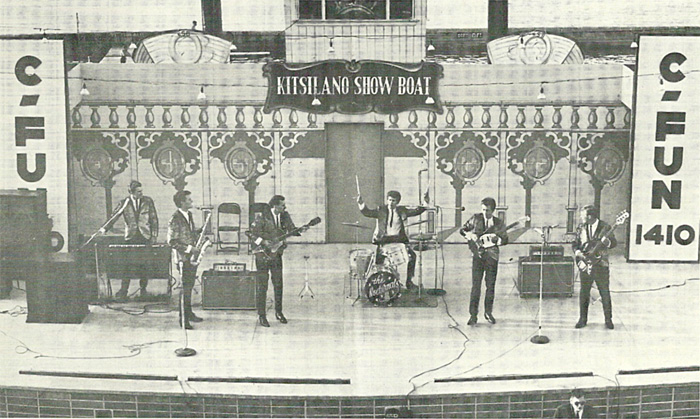 The Nocturnals started as an instrumental band called the Rousers in the late 1950’s in Haney, BC. Haney  was a town east of Vancouver. Their sound changed over time and they renamed themselves the Nocturnals. Now based in Vancouver, the band consisted of Bill McBeth on drums and lead vocals, Ron Henschel on guitar, Chad Thorp organ, Wayne Evans on bass, and Roger Skinner and Carl Erickson on saxophone. The Nocturnals became affiliated with 1410 CFUN, an AM radio station in Vancouver. On this pop music station The Nocturnals did many promotional appearances during noon hour sock hops at schools and special events. They were referred to as the “Funtastic Nocturnals” and were featured on shows hosted by DJ’s Red Robinson, Fred Latremouillle and “Jolly” John Tanner.

The Nocturnals made appearances at the PNE (Pacific National Exhibition), Kitsilano Showboat and Queen Elizabeth Theatre. They performed as opening acts variously for the Knickerbockers, Glen Campbell, The Coasters, Lou Christie and Sam the Sham and The Pharaohs.

In late 1965 the Nocturnals traveled to Kearney Barton’s Audio Recording in Seattle. This was the same studio used by Pacific Northwest bands the Sonics, and the Wailers. The Nocturnals first single, “Because You’re Gone” chugs along steadily with a Peter Gunn-style riff, flashes of horns, fine drumming and chanting vocals. Their follow up single featured two more original compositions: “This Ain’t Love,” and the B-side, “You Lied.” “This Ain’t Love” was co-written by Nocturnals bandmates Roger Skinner and Wayne Evans. In the song their is a “they” in society, or in the couples orbit, who tell them what they are experiencing “ain’t love.” “They” is possibly parents or other peers who tell the guy in the song that the person he’s dating is not for him, not suitable. But, as the lyrics tell us that “they” warn the couple they’re “playing games” they “shouldn’t play,” it’s likely parents, or the older generation who is the source of the judgement. The lyrics ask “what can it be that makes us one?/Can it be just having fun?”

In 1967 the band was a featured act at Expo ’67 in Montreal. However, in 1968, The Nocturnals broke up in the midst of the psychedelic rock era.

After the split, Roger Skinner appeared as a studio musician drumming a 1969 Paragon Records album by The Country Ducats titled Vocal & Accordion Favorites. In 1972, Skinner contributed drums to another Country Ducats album titled You Can’t Take The Country From The Man. Skinner also played drums on a 1974 Canadian country album by Ed Rowsell titled Close Up. That same year, Skinner was again drumming on Little Johnny Cameron’s self-titled debut country album. In 1979, Wayne Evans had a vinyl release with country & western tracks. Credit references for both Roger Skinner and Wayne Evans, linked to The Nocturnals song credits for “This Ain’t Love” are found on Discogs.com