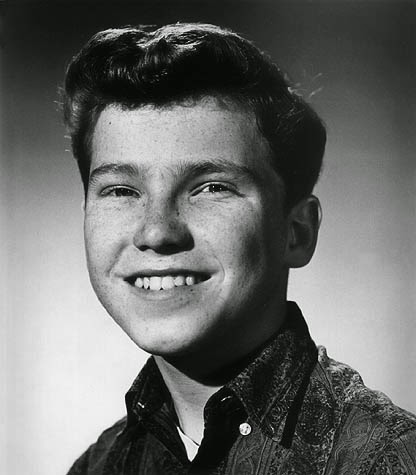 #553: Bandit of My Dreams by Eddie Hodges

Samuel Hodges was born in 1947 in Hattiesburg, Mississippi. By the age of six he became a child actor billed as Eddie Hodges. He appeared on the Jackie Gleason Show and on Name That Tune in 1953. In 1957 he was cast in the role of ten-year-old Winthrope Paroo in the Broadway musical The Music Man. In the stage production he was one of those singing “The Wells Fargo Wagon” and “Gary, Indiana”, along with Robert Preston. In the 1962 film The Music Man, Ron Howard would appear as Winthrope Paroo. Eddie Hodges first film was in 1959 with Frank Sinatra in A Hole in The Head. Hodges played opposite Frank Sinatra (Tommy Manetta) as his 11-year-old son. The film about a down-and-out widowed father featured the Oscar award winning song “High Hopes” (Best Original Song) and a Grammy Award nomination. In the film Frank Sinatra and Eddie Hodges sang a duet. In 1959 Eddie Hodges appeared on The Jimmy Durante Show where he sang with Durante, Ray Bolger and Jane Powell. In 1960 Eddie Hodges starred as Huckleberry Finn in The Adventures of Huckleberry Finn.

In December 1960 Eddie Hodges appeared in another Broadway play titled Critic’s Choice, alongside Henry Fonda. As a recording artist, Hodges released “Funny Little Dog Of Mine” on Festival Records in 1958.

In 1961 Eddie Hodges released his first single on Cadence Records titled “I’m Gonna Knock On Your Door”. The single climbed to #1 in Vancouver (BC) and #12 on the Billboard Hot 100. It ranked as the #92 song for the end of the year according to Billboard. It also topped the pop charts in the Netherlands and Sweden, and peaked at #2 in Norway. Hodges follow-up single was titled “Bandit Of My Dreams”, which he performed on American Bandstand on February 7, 1962. “Bandit Of My Dreams” was co-written by Aaron Schroeder and Anne Orlowski, the mother of Gene Pitney. Schroeder wrote “At a Sidewalk Penny Arcade” for Rosemary Clooney in 1948. He wrote 17 hit songs for Elvis Presley including five that topped the charts: “A Big Hunk o’ Love”, “Good Luck Charm”, “I Got Stung”, “It’s Now Or Never” and “Stuck On You”. He also wrote songs recorded by Chaka Khan, Roy Orbison, Nat “King” Cole, Perry Como, Barry White, Tony Bennett, Dionne Warwick, Pat Boone, Carl Perkins, the Staple Singers and Paul McCartney. He also wrote “French Foreign Legion” for Frank Sinatra. Schroeder also produced numerous hits for Gene Pitney that included “Town Without Pity”, “(The Man Who Shot) Liberty Valance”, “Only Love Can Break A Heart” and “24 Hours From Tulsa”. Aaron Schroeder later became an international music representative for Hanna-Barbera Productions and provided music, singers and songs for “The Banana Splits” and “Scooby Doo, Where Are You!”

“Bandit Of My Dreams” is a song using a metaphor of a bandit to describe an elusive relationship. Each night when the narrator goes to sleep the same person comes and robs his heart. This bandit steals kisses and sneaks around catching them by surprise. This leads the songs narrator to wish they could capture the bandit “and sentence you to life imprisonment in my arms.” They wonder why the bandit doesn’t just surrender to his arms, and listeners to the song are left with that same question.

Hodges next single was written by Phil Everly titled “(Girls, Girls, Girls) Made To Love”. The song climbed to #14 on the Billboard Hot 100 in the summer of 1962. In the winter of ’62 Hodges single “Seeing Is Believing” was a commercial failure. And from 1963 into 1965, his single releases “Would You Come Back”/”Too Soon To Know”, “Raining In My Heart”/”Halfway”, “I’m Just A Kid In Love” and “Across The Street (Is A Million Miles Away)” all failed to crack the Billboard Hot 100. Eddie Hodges made his final appearance on the Billboard Hot 100 in the spring of 1965 with a cover of the 1960 Gary U.S. Bonds hit “New Orleans”. The single climbed to #12 in Vancouver.

Later in 1962 Eddie Hodges played the son of a United States Secretary of State embroiled in a perjury charge in the award winning film Advise & Consent. In 1963 Hodges appeared in the Disney feature film Summer Magic with Hayley Mills, Burl Ives and Dorothy McGuire. Mills and Hodges sang a duet titled “Flitterin'”, which was a minor hit in San Bernardino (CA).

While he was in Hollywood Eddie Hodges had guest appearances on What’s My Line?, Bonanza, Gunsmoke, The Dick Van Dyke Show and others. He also appeared on Hollywood A Go-Go, American Bandstand and Shebang. Over the years as a recording star, Eddie Hodges appeared on stage with a diverse lineup of performers, including Chuck Berry, Bob Dylan and the Beach Boys

In 1967 Hodges played Livingston, one of two sons of the eccentric millionaire Mr. Biddle, who in 1916 wants America to enter World War I. The film The Happiest Millionaire was the last film with the personal involvement of Walt Disney who died during the production of the film. That year he also starred in a teen flick called C’mon Let’s Live A Little, alongside Jackie DeShannon and Bobby Vee. His final film role was in 1968 as a delivery boy in Live A Little, Love A Little, starring Elvis Presley, Rudy Vallee and Dick Sergeant who was a star in the TV sit-com Bewitched. Live A Little, Love A Little was released into theaters in October 1968.

Shortly after, Eddie Hodges was drafted into the United States Army during the Vietnam War. He was given a non-combat assignment within the United States. After he finished his Army duty, he went back to Hollywood but became disenchanted with show business.

Hodges left Hollywood and got a B.S. in Psychology and a Masters in Counseling. in Mississippi. He went on to become a mental health counselor. In the early 90s Eddie Hodges appeared on the Oldsberg Show in Sweden to sing “I’m Gonna Knock On Your Door”, the first number one hit on Swedens pop chart. At the end of his practice Eddie Hodges was in the news again when he was out of contact for 19 days in 2005 after Hurricane Katrina struck in late August. Though he was without water, electricity or phone, he survived.

One response to “Bandit of My Dreams by Eddie Hodges”