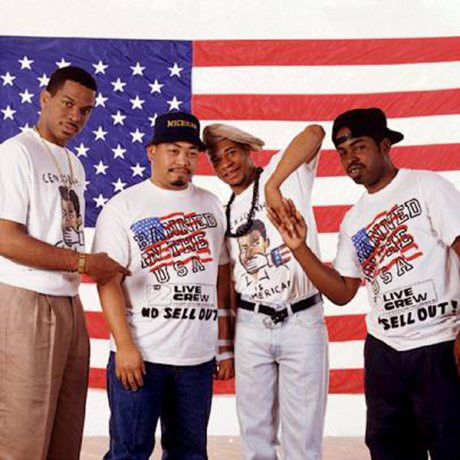 David Hobbs was born in Santa Ana, California, in 1963. After high school he joined the United States Air Force. In 1984, while he was stationed in Riverside, California, he met two other Airmen, and Christopher Wong Won and Yuri Vielot. Christopher Wong Won was born in Port of Spain, Trinidad and Tobago, in 1964. His family moved to Brooklyn, New York, in 1976. The trio became rap group named 2 Live Crew, and released their first single “The Revelation”. Hobbs was known as Mr. Mixx. Wong Won as Fresh Kid Ice and Vielot as Amazing Vee. When their rap single became a regional hit in Florida a DJ in the Sunshine State named Luke Skywalker invited the trio to move to Florida. Mr. Mixx and Fresh Kid Ice relocated to Florida, while Yuri Vielot stayed behind in California.

Luther Campbell was born in 1960 in Miami. He worked as a cook at a hospital in Miami while becoming a rap music promoter. Adopting the name of Luke Skywalker, he managed 2 Live Crew and also was a performer at their concerts and on their studio recordings.

Mark D. Ross was born in 1966 in Rochester, New York. After he moved to California in his teens he saw a 2 Live Crew concert. Once 2 Live Crew were based in Florida, Ross was invited to join the band and adopted the stage name Brother Marquis. In 1986 the band released their debut album 2 Live Crew Is What We Are. Some of the album tracks contained sexually explicit lyrics, including “We Want Some Pussy”. The album made the Top 30 on the Billboard R&B/Hip-Hop album chart. The band’s followup album released in 1987 was Move Somethin’, which climbed to #68 on the Billboard 200 album chart and the Top 20 on the Billboard R&B/Hip-hop album chart.

Banned in the U.S.A. was the first album to get a Parental Advisory warning sticker on each album copy in American record stores. The title song was about the court case. 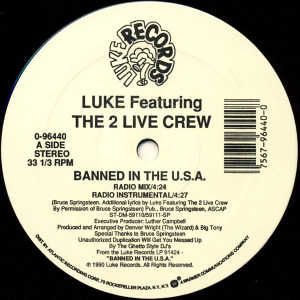 “Banned In The U.S.A.” was composed by Bruce Springsteen, as 2 Live Crew sampled Springsteen’s “Born In The U.S.A.” Additional lyrics were contributed by members of 2 Live Crew. The official video featured images of an American Revolutionary War veteran reading . A front page headline in the Miami Herald shown in the video reads “Rap Album Ruled Obscene.” The opening lines from the song are taken from President Abraham Lincoln’s closing words in the Gettysburg Address of November 19, 1863: “Government of the people, for the people, by the people.” Lincoln was speaking to Union troops, and encouraging them to victory when he told them “that these dead shall not have died in vain—that this nation, under God, shall have a new birth of freedom and that government of the people, by the people, for the people, shall not perish from the earth.” The phrase from Lincoln’s speech, and the Gettysburg Address itself, are among the most well known quotes from political speeches in the history of the nation. Its aspirational notion is that those in political office are directly responsible to the people who elect them.

The song intersperses rap with comments from a news reporter detailing the 2 Live Crew court case in Broward County, Florida. 2 Live Crew argued that the initial ruling was banning free speech. As reflected in the song’s rap lyrics, band members argued before the court that their lyrics were about pleasure and not violent or obscene. The band eventually won in an Appeals Court ruling.

Bruce Springsteen, who wrote the melody that 2 Live Crew used for “Banned In The USA” was born in 1949 in Long Branch, New Jersey. When he was seven years old he saw Elvis Presley on The Ed Sullivan Show and was inspired to start trying to learn the guitar. It was an instrument he took up more seriously in his teens. He finally bought his first guitar after he saw the Beatles appear on The Ed Sullivan Show in February 1964. He formed a band called the Rogues, and later became the lead singer in the Castiles who performed at Cafe Wha? in Greenwich Village. He was part of a number of bands in the late Sixties and his debut album Greetings From Asbury Park, N.J., included “Blinded By The Light”. The song was later covered by the Manfred Mann Earth Band and became a number-one hit in the USA and Canada in 1977.

In 1975 Springsteen released his Born To Run album which shot to number-three on the Billboard 200 Album chart. The title track from the album climbed into the Billboard Hot 100 Top 30. After several more album releases, in 1980 Bruce Springsteen had his first Top Ten single with “Hungry Heart”. But it was his 1984 release of Born In The U.S.A. The album became an international best seller topping the album charts in over a dozen nations. From that album he had a series of Top Ten hits. These included “Dancing In The Dark”, “Cover Me”, “Born in the U.S.A.”, “I’m On Fire”, “Glory Days”, “I’m Going Down” and “My Hometown”/”Santa Claus Is Coming To Town”.

Bruce Springsteen’s “Born in the U.S.A.” is superficially a flag-waving patriotic ode to America. However, the lyrics reveal it is actually a commentary on the return of American soldiers back home after the Vietnam War. The veteran in the song is a tragic figure alienated by the experience of war. The song’s working-class man enlists with the armed forces to “fight the yellow man” and is discontented with the point of the war and uneasy about how he now views America. His fellow veterans are all dead.

The choice by 2 Live Crew to sample “Born in the U.S.A.” is likely due to their experience with being taken to court over their song lyrics, and subsequent disenchantment with the rhetoric about freedom of speech.

In 1986 Bruce Springsteen had a Top Ten hit with a cover of the number-one 1970 Edwin Starr recording of “War”. Other notable hits that followed were “Tunnel Of Love” and “Brilliant Disguise”. In 1994 Springsteen had his last Top Ten hit in the USA with “Streets Of Philadelphia”, the theme song from the dramatic film Philadelphia starring Denzel Washington and Tom Hanks. Throughout his career Bruce Springsteen has sold over 135 million records and won twenty Grammy Awards.

2 Live Crew’s “Banned In The U.S.A” made it to #3 on the Vancouver (BC) pop chart. The song was banned in numbers of American radio markets, but still managed to climb to #20 on the Billboard Hot 100. Later that year 2 Live Crew released a live album, Live in Concert.

In the summer of 2020 protesters in America are toppling statues to express their opposition to racism. Many statues were built after the Reconstruction era (1877), when states in the Deep South erected monuments to leaders of the Confederate army. The act of erecting a statue is intended to teach something about someone important in history. Of course, there were white abolitionist generals who never got statues erected in an era now pining for the Old South. In a park in Rochester, New York, a statue of escaped slave and abolitionist Frederick Douglass was toppled and dumped in a gorge. In Madison, Wisconsin, a statue of abolitionist Hans Christian Heg was torn down. Perhaps there are more statues of civil rights leaders and those struggling for justice in America could be erected. Perhaps plaques on statues of old confederate soldiers could be replaced with new ones that offset the laudatory sentiments, adding the downside to their legacies. But when statues of anti-slavery luminaries like Douglass and Heg are taken down, what is going on here? The presence of one statue may be a cause to ask why other statues of notable African-American, Hispanic and American Indian leaders are not being erected to remember what they did. Whether the nation decides its time to remove all its statues (whether through acts of vandalism or legislation) or keep them, these historical figures will remain the subject of history courses for students to debate their merits.

In 1991 the band released their sixth album titled Sports Weekend: As Nasty As They Wanna Be, Pt. 2. The album included a number five Billboard Rap chart his “Pop That Pussy”.  Mr. Mixx and Brother Marquis left the band and in 1994 Fresh Kid Ice and Luke added a new member by the stage name of Verb. They released an album titled Back at Your Ass for the Nine-4.  In 1995 Fresh Kid Ice, Brother Marquis and Mr. Mixx teamed up to release “Hoochie Mama” as part of that years comedy film Friday. The Friday Soundtrack album, which included tracks by Ice Cube, Dr. Dre, Rick James, Rose Royce and others, topped the Billboard 200 album chart.

There have been various reunions with partial combinations of the original members over the years. While individual bandmates of 2 Live Crew have pursued their own solo projects.

In 2015 Fresh Kid Ice published his memoir. In 2017 Fresh Kid Ice (Christopher Wong Won) died at the age of 53 from cirrhosis of the liver.