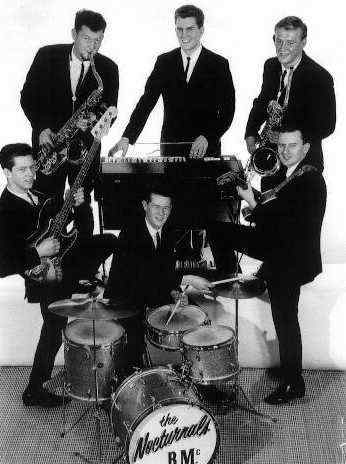 #1193: Because You’re Gone by The Nocturnals

The Nocturnals started as an instrumental band called the Rousers in the late 1950’s in Haney, BC. Haney  was a town east of Vancouver. Their sound changed over time and they renamed themselves the Nocturnals. Now based in Vancouver, the band consisted of Bill McBeth on drums and lead vocals, Ron Henschel on guitar, Chad Thorp organ, Wayne Evans on bass, and Roger Skinner and Carl Erickson on saxophone. The Nocturnals became affiliated with 1410 CFUN, an AM radio station in Vancouver. On this pop music station The Nocturnals did many promotional appearances during noon hour sock hops at schools and special events. They were referred to as the “Funtastic Nocturnals” and were featured on shows hosted by DJ’s Red Robinson, Fred Latremouillle and “Jolly” John Tanner.

They made appearances at the PNE (Pacific National Exhibition), Kitsilano Showboat and Queen Elizabeth Theatre. They performed as opening acts variously for the Knickerbockers, Glen Campbell, The Coasters, Lou Christie and Sam the Sham and The Pharaohs.

In late 1965 the Nocturnals traveled to Kearney Barton’s Audio Recording in Seattle. This was the same studio used by Pacific Northwest bands the Sonics, and the Wailers. The Nocturnals first single, “Because You’re Gone” chugs along steadily with a Peter Gunn-style riff, flashes of horns, fine drumming and chanting vocals. Their follow up single featured two more original compositions: “This Ain’t Love”, and the B-side, “You Lied”. Both of their Regency 45s reached the top ten on C-FUN.

For their first two singles the band had help in song writing from Kathy Dubin and Jeanne Fink, two sisters who were fans of the band. Kathy and Jeanne wrote “Because You’re Gone” with Billy McBeth and the flip “Can It Be True” with Henshel. Jeanne’s daughter Linda headed the Nocturnals fan club! “Because You’re Gone” is a song about a guy who is broken-hearted since his break-up with his girlfriend. When he sees her with someone new he “can only sit and cry.” Perhaps there were a lot of listeners empathizing with the guys circumstances. Vancouver fans of The Nocturnals helped the tune peak on C-FUN at #9. It was a local hit and did not get airplay south of the border or east of the Rockies. Baby I love you so.
And I don’t know when I let you go.
No one else could ever take your place.
And I only gotta see your face.
I love you baby.
I love you still.
I’ll try to get to you.
Oh yes I will. Yeah.

I see you walking by with some other guy…

Baby you’ve really gone.
And I’ll ever sing this song.
No one else can ever take your place.
And I’ve only gotta see your face.
I love you baby.
I love you still.
I’ll try to get to you.
Oh yes I will. Yeah.

I see you walking by with some other guy…

In 1967 the band was a featured act at Expo ’67 in Montreal. However, in 1968, The Nocturnals broke up in the midst of the psychedelic rock era.