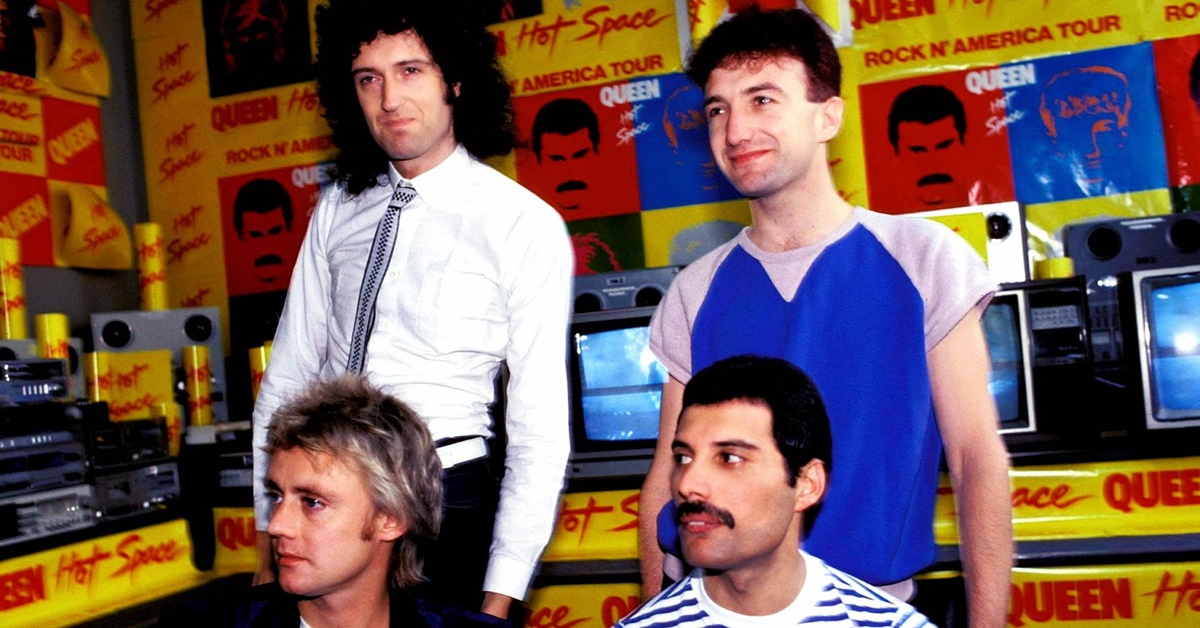 Farrokh Bulsara was born in 1946 in Zanzibar. He was raised by his Parsi parents who came to Africa from India. His family moved to India in 1954 when he was eight, where he attended British-style boarding schools near Bombay. He moved back to Zanzibar in 1963, but his family fled to England in 1964 after the Zanzibar Revolution and the overthrow of the Sultan of Zanzibar by indigenous Africans. Bulsara was born a British subject, as Zanzibar was a British protectorate until 1963. After studying graphic art and design, Farrokh was part of several bands in the London area. In 1970 he hooked up with several members from a band called Smile, Brian May and Roger Taylor. Farrokh Bulsara named their new band Queen. He also legally changed his name to Freddie Mercury.

Brian Harold May was born in 1947 in a western suburb of London. He studied piano and guitar and his first band was named 1984, after the title of George Orwell’s book. May got a Bachelor of Science in Physics. In 1968 he formed a band called Smile with Roger Taylor and Tim Staffell. Roger Meddows Taylor was born in 1949 near the North Sea in King’s Lynn, Norfolk, England. When he was seven he formed his first band with some other boys where he played the ukulele. When he was fifteen he formed a band called Reaction with other boys from his school. Initially, he played guitar. But he switched to drums when he discovered it came more naturally to him. He listened to albums by The Who and practiced drums to sound like Who drummer Keith Moon. He studied Biology and got a Bachelor of Science. Taylor joined Smile and also worked in Kensington Market selling secondhand clothes with Farrokh Bulsara who soon became a big fan of Smile.

A fourth member to join Queen was John Richard Deacon. John was born in 1951 in the East Midlands of England in Leicester. At age fourteen, Deacon joined a band called The Opposition. He later got a degree in Electronics. Though he saw Queen perform in 1970, he wasn’t impressed. Nonetheless, John Deacon ran into Taylor and May at a disco in early 1971 and was persuaded to audition for Queen, as they wanted a bass guitarist.

Queen signed a record contract and released their debut album in 1973. Though the single “Keep Yourself Alive” was not commercially successful, Rolling Stone ranked it at #31 in their 2008 issue of the “100 Greatest Guitar Songs of All Time.” The following year the band released Queen II which included a Top Ten hit in the UK titled “Seven Seas Of Rhye”. In 1974 Queen toured for a month in the USA with Mott The Hoople. However, Brian May collapsed on stage and the band returned to England. In 1974 the Sheer Heart Attack album was released. It contained “Killer Queen” which made the Top Ten in the UK, Ireland, Austria, Belgium, France, Netherlands and Norway. It also made the Year-End Top 100 in the Netherlands, UK and USA.

In 1975 Queen released A Night At The Opera, with the lead single “Bohemian Rhapsody”. The six minute  single was initially rejected by some DJ’s in the UK. But it began to catch on. Its inventive mirroring of a piece of opera done in a rock genre shot to the top of the UK charts for nine weeks in the winter of 1975-76. In its initial release, and subsequent re-issues in 1991 and 2019, “Bohemian Rhapsody” climbed into the Top Ten of over twenty nations internationally, selling over ten million copies. In 1976 “Bohemian Rhapsody” shot to #1 in Vancouver (BC) for 3 weeks in March. “Bohemian Rhapsody” is the most popular Muppets cover, with more than 48 million views on YouTube so far. Queen’s followup single, “You’re My Best Friend”, written by John Deacon, made the Top Ten in Canada and a few other international markets.

In 1978 Queen released their Jazz album and then in ’79 Live Killers. While both albums went platinum, it was left to their 1979 album, The Game, to get them back in the Top Ten singles charts with “Crazy Little Thing Called Love”. The single which echoed 1950s rockabilly was written by Mercury as a tribute to Elvis Presley, who had died in August 1977. The single spent nine weeks in the Top Ten in Vancouver (BC), including two weeks at #1 and five weeks at #2. It was knocked out of the top slot by Pink Floyd’s “Another Brick In The Wall”. That year Queen also performed at the Pacific Coliseum in Vancouver (BC) on March 11th. This was part of their A Day At The Races world tour, their sixth tour. The band returned to Vancouver on December 14, 1978, for another concert at the Pacific Coliseum as part of their Jazz Tour. And in 1980 they launched The Game Tour in Vancouver on June 30, 1980.

From The Game came three more singles, “Save Me”, “Play The Game” and “Another One Bites The Dust”. The last two of these releases charted in Vancouver (BC). “Another One Bites The Dust” spent three weeks at #1 on the Billboard Hot 100 in October 1980. The single peaked in the Top Ten in over fifteen countries internationally. In Vancouver (BC) the single climbed to #1 for 3 weeks and spent fifteen weeks in the Top Ten, and 21 weeks in the Top 20. In March 1981 “Another One Bites The Dust” was nominated for a Grammy Award in the Best Rock Performance by a Duo or Group with Vocal category, losing out to Against The Wind by Bob Seger and the Silver Bullet Band. Freddie Mercury said later, “Credit for the song should go to Michael Jackson in many ways. He was a fan and friend of ours and kept telling me, “Freddie, you need a song the cats can dance to.” John introduced this riff to us during rehearsal that we all immediately thought of disco, which was very popular at the time. We worked it out and once it was ready, played it for Michael. I knew we had a hit as he bobbed his head up and down. “That’s it, that’s the gravy. Release it and it will top the charts,” he said. So we did and it did.”

In 1980 Queen wrote and recorded the theme song for the film Flash Gordon titled “Flash”. On September 4, 1982, Queen returned for their fourth concert at the Pacific Coliseum in Vancouver. In 1982 Queen charted two #2 hits in Vancouver (BC), “Under Pressure” and “Body Language”.

Though the hits for Queen faded in North America, in the UK, Ireland, Australia, New Zealand, Austria, Belgium, Germany, Netherlands and Switzerland, the band continued to appear in the Top Ten with “Radio Ga Ga”, “I Want To Break Free”, “A Kind Of Magic”, “I Want It All”, “Breakthru” and “Innuendo”. France, where the band did not do as well, saw their national chart topped by Queen in 1991 with “The Show Must Go On”.

On July 13, 1985, Queen did a knockout performance at Wembley Stadium for the Live Aid benefit concert. The performance was seen by 2 billion viewers.

Spanish soprano Montserrat Caballé recorded an album of duets in 1987 with Freddie Mercury. She remarked after the album’s release “the difference between Freddie and almost all the other rock stars was that he was selling the voice. His technique was astonishing. No problem of tempo, he sang with an incisive sense of rhythm, his vocal placement was very good and he was able to glide effortlessly from a register to another. He also had a great musicality. His phrasing was subtle, delicate and sweet or energetic and slamming. He was able to find the right colouring or expressive nuance for each word.”

In 1987 Freddie Mercury was diagnosed with HIV/AIDS. Although he began to look gaunt in public, he denied media reports that he was ill. But on November 23, 1991, on his deathbed he made a statement confirming that he had AIDS. After Freddie Mercury died in 1991, The Who’s lead singer Roger Daltrey said that Mercury was “the best virtuoso rock ‘n’ roll singer of all time. He could sing anything in any style. He could change his style from line to line and, God, that’s an art. And he was brilliant at it.”

After Mercury’s death, “Bohemian Rhapsody” climbed to the top of the charts in the UK, Ireland and the Netherlands. It also reached the Top Ten in the Australia, Austria, Switzerland and the USA. A tribute concert for Freddie Mercury in Wembley Stadium drew a televised audience of over 1.2 billion. It also raised over twenty million pounds for AIDS charities.

Queen enjoyed one more international Top Ten hit in the mid-90s titled “Heaven for Everyone”. The single was from Queen’s final album, Made In Heaven. The album tracks featured some of the last vocal recordings before Freddie Mercury died. In 1997 John Deacon retired from the band.

In 2018 a biopic of Queen and Freddie Mercury was released titled Bohemian Rhapsody. The film earned over 900 million from ticket sales at the box office. At the 91st Academy Awards on February 24, 2019, Rami Malek won the Oscar for Best Actor for his portrayal of Freddie Mercury in the film. Malik also won Best Actor at the Golden Globes, the British Academy Film Awards, Australian and other international awards. The film also won a Golden Globes award in the Best Motion Picture – Drama category.