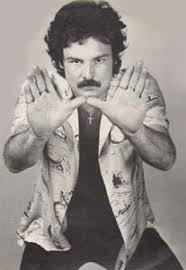 #825: Break It To Them Gently by Burton Cummings

Burton Cummings is the former lead singer and keyboardist for the Winnipeg, Manitoba, based rock ‘n roll band The Guess Who. He was with the band from 1965 to 1975. Cummings sang, wrote or co-wrote many hit songs. These include “American Woman”, “Clap For The Wolfman”, “Hand Me Down World”, “Laughing”, “No Time”, “Share The Land”, “Star Baby” and “These Eyes”. His solo career includes many hit singles, including “I’m Scared”, “My Own Way To Rock” and “Fine State Of Affairs”. His first solo hit single was “Stand Tall”, in 1976, which was his biggest hit as a solo recording artist.

Cummings was born in Winnipeg, Manitoba, in 1947. When he was sixteen he dropped out of high school. In 1962, while only fifteen, Cummings founded a band named the Deverons. All members of the band learned to play by ear. Cummings played piano, saxophone and lead vocals. Their high school dance concerts comprised of covers of songs from the late 50’s and early 60’s including “This Time” by Troy Shondell, “Wild Weekend” by The Rebels, “Sheila” by Tommy Roe and “Only Love Can Break A Heart” by Gene Pitney. The Deverons released a couple of singles and Cummings got some positive word-of-mouth and reviews in the local Winnipeg papers. This was pretty exciting for bandmates who still all lived in their parents homes.

In January 1966 Cummings was asked to join another Winnipeg band, The Guess Who, when keyboardist Bob Ashley left the group. By May 1966 Burton Cummings became the lead vocal for the group when Chad Allen left to pursue solo work and host the CBC TV show Let’s Go. While Cummings was with The Guess Who the band scored twenty-one Top 20 hits in Canada, including five number one singles on the Canadian RPM record charts: “Shakin’ All Over”, “Laughing”, “No Time” and “American Woman”/”No Sugar Tonight”. “Break It To Them Gently” is a song about a guy who got in trouble with the law. In Canada, while there are people who own guns to hunt, it is unusual for a typical citizen to own a gun. This is especially the case in owning a gun to aid criminal activity. This guys Grandma had him figured out a long time ago when she first said “the boy is wild and bad.” Now he’s  fugitive. He won’t be coming home again, where the police can arrest him. He’s not planning to go into custody and face charges. His plan going forward is to be “running with a gun.” So he is armed, and possibly in the eyes of the police, extremely dangerous. He’s also going to be making it alone. Whoever the strangers were that he got in too deep with, he’s not fleeing the hands of the law with any other accomplices.

An article from the Australian Horticultural Correspondence School (ACS), the following factors are listed as catalysts to teenage crime:

The list from Australia resembles conclusions reached elsewhere in the UK, USA and Canada. According to Canada’s Department of Public Safety and Emergency Preparedness, about six percent of Canadian youth between ages 12 and 17 commit crime. The United States’ National Institute of Justice wrote in 2014 that crime-related incidents peaks between the ages of 15 and 19 for the general population. However, persistence in criminal activity into adult years is highest among youth from the poorest and most disadvantages communities. The peak age violent criminal activity spikes into the mid-20’s. Between ten and thirty percent of juvenile offenders reoffend in their early adult years.

In Burton Cummings song, “Break It To Them Gently,” the age of the “fugitive” is not stated. However old he is, his Mom, Dad, Grandma, sister and girlfriend all matter to him. Whether he is 16, 19, 22, 24 or 26, these people all matter to him. Young as he is, he wants to thank them “for the good years.” What lies on his horizon is bleak as a fugitive on the run from the police. And, in his case, he considers he was raised in a loving family. Statistics might indicate a young man like this was possibly from a poor family. Yet, it’s also plausible the character in the song was raised with all the opportunity that a “middle-class” upbringing offers, but due to peer pressure and poor judgment got involved with the wrong kind of strangers. After all, most people we meet in our lives are, at first, strangers. In most cases they do no harm to us. But some people are the kind we want to stay away from. In the case of this guy who is running with a gun, he’s learned too late how much bad choices can sabotage your one precious life.

The album, Dream Of A Child, earned Burton Cummings a Juno Award in 1979 for Top Selling Album.

Cummings has lived in both California and Winnipeg. Among the many highlights of Burton Cummings career, in the 1980’s and 1990’s he toured with Ringo Starr’s All Starr Band. Cummings also starred in the 1982 feature film, Melanie, and won a Genie Award for Best Original Song in 1983. The Guess Who have toured from time to time on reunion tours since 2000. Burton Cummings has performed in concert with the Bachman-Cummings Band and also gone on tour as a solo act. In 2009, Cummings received the Order of Canada. More recently, he published a book of poetry titled The Writings off B.L. Cummings. As of April 24, 2018, Burton Cummings has six concert dates scheduled between June and August, 2018, across British Columbia, Saskatchewan, Manitoba and Ontario. With fifty albums recorded, he shows no sign to slowing down in his seventh decade.