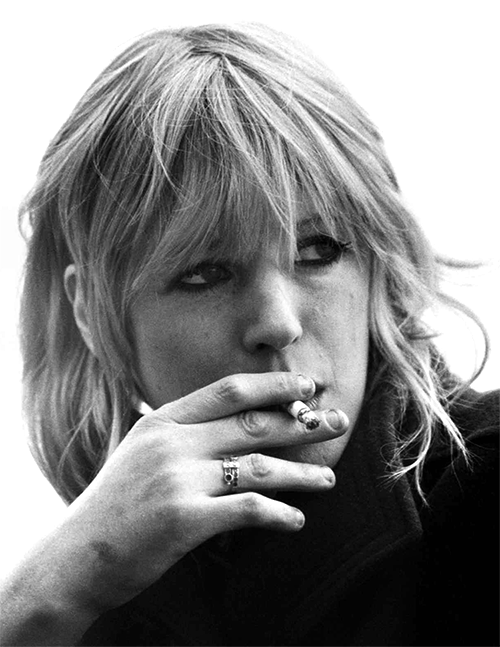 Marianne Faithfull’s story has been well documented, not least in her insightful 1994 autobiography Faithfull. She was born in December, 1946, in Hampstead, a borough of Greater London. In 1964 she began appearing at coffeehouses in London as one of the acts on stage. She showed up at a launch party for the Rolling Stones. At the event she met Andrew Loog Oldham, the Rolling Stones manager who was always on the lookout for new talent. Faithfull’s career as the crown princess of swinging London was launched with “As Tears Go By”. The song climbed to #9 in the UK and into the Top 30 in the USA and in Vancouver. At the time she was 16 years old. Her 1964 hit single was the first song ever written by Mick Jagger and Keith Richards. Two folk albums, two pop albums and a singles collection followed. Marianne Faithfull also embarked on a parallel career as an actress, both on film in Girl On A Motorcycle (1968) and on stage in Chekhov’s Three Sisters (1967) and Hamlet (1969) By the end of the Sixties personal problems halted Marianne’s career and her drug addiction took over.

Her early work was in folk music. Her album, Come My Way, featured her interpretations of “House of the Rising Sun,” the 18th Century English folk ballad “Fare Thee Well Love”, Ian Tyson’s “Four Strong Winds” and the American folk tune “Portland Town”. Her debut album, Marianne Faithfull, released the same day as Come My Way, included the folk tune by Malvina Reynolds, “What Have They Done To The Rain”. Her follow up single was a cover of Bob Dylan’s “Blowin’ In The Wind.” Her third single was the Jackie de Shannon composition “Come And Stay With Me“. The song climbed to #26 on the Billboard Hot 100, #4 in the UK and #6 in Vancouver.

Faithfull’s fourth single release, “This Little Bird”,  would be her third to reach the Top Ten in the UK. The song climbed to #6 on the British charts, #5 in Vancouver and #32 on the Billboard Hot 100.

Marianne Faithfull scored another Top Ten hit in the UK and in Vancouver in 1965 called “Summer Nights.” It climbed to #5 on CFUN, #10 in the UK and #24 on the Billboard Hot 100. But that would be her last hit in the Top 40 in the USA, and aside from her cover of the Beatles “Yesterday” which peaked at #36 in the UK, she was shut out of her home country too.

Perhaps her choice to record “This Little Bird” back in 1965 reflected a foreshadowing of her own awareness of her own dark side. By the late 60s Marianne Faithfull would begin a serious struggle with alcohol addiction. Into the early 70s she lived on the streets of London for several years, adding a suicide attempt and heroin addiction to her woes.

Faithfull emerged tentatively in 1976 with a country album called Dreamin’ My Dreams. Though the album attracted little attention in the UK, it was a huge hit in Ireland, where the title track spent 7 weeks at number one. This led to Marianne going back on the road for the first time in a decade. However, it was her furious re-surfacing on new wave album, Broken English, in 1979 that definitively brought her back. The innocent pop persona created around her in the Sixties was shredded. Now she sang songs like “The Ballad of Lucy Jordan” about the mental deterioration of a suburban housewife. Faithfull became a kind of oracle, and the artist people turned to, to lead them through dark times. Her title track from the album was “Broken English”. “Broken English” was co-written by Marianne Faithfull, Barry Reynolds, Joe Movety, Steve York and Terry Stannard. Of her co-writers Barry Reynolds was the most prolific. He collaborated with Marianne Faithfull on her albums Broken English, Dangerous Acquaintances, A Child’s Adventure and Vagabond Ways. He wrote and/or produced songs for Grace Jones, Joe Cocker and Black Uhuru.

“Broken English” is a song about terrorism. It was inspired after Marianne Faithfull viewed a documentary about the Baader-Meinhoof Gang. Ulfike Marie Meinhof (7 October 1934 – 9 May 1976) was a West German far-left militant. She co-founded the Red Army Faction (Rote Armee Fraktion or RAF) in 1970, after having worked as a journalist for the monthly left-wing magazine konkret. She was arrested in 1972, charged with numerous murders and the formation of a criminal association. In 1976, before the trial concluded, Meinhof was found hanged in her prison cell. The official statement claimed that Meinhof had committed suicide; however, several facts led to public controversy about her death. Berndt Andreas Baader (6 May 1943 – 18 October 1977) was one of the first leaders of the West German left-wing militant organization Red Army Faction, also commonly known as the Baader-Meinhof Gang.

The origins of the Baader-Meinhof Gang can be traced back to the student protest movement in West Germany. Industrialized nations in the late 1960s experienced social upheavals related to the maturing of the “baby boomers”, the Cold War, and the end of colonialism. Newly found youth identify and issues such as racism, women’s liberation, and anti-imperialism were at the forefront of left-wing politics. Many young people were alienated, from both their parents and the institutions of state. The historical legacy of Nazism under Adolph Hitler, from 1933 to 1945, drove a wedge between the generations and, increased suspicion of authoritarian structures in society.

In West Germany there was anger among leftist youth at the post-war denazification in West Germany and East Germany, which was perceived as a failure or as ineffective, as former (actual and supposed) Nazis held positions in government and the economy. The Communist Party of Germany had been outlawed since 1956. Elected and appointed government positions down to the local level were often occupied by ex-Nazis. Konrad Adenauer, the first Federal Republic chancellor (in office 1949–1963), had even appointed former Nazi sympathiser Hans Globke as Director of the Federal Chancellery of West Germany (in office 1953–1963).

The emergence of the Grand Coalition between the two main parties, the Social Democratic Party of Germany and Christian Democratic Union, occurred un 1966. Former Nazi Party member Kurt Georg Kiesinger, who worked as a liaison with the Propaganda Ministry from 1943 to 1945, was the new chancellor of the Grand Coalition. This horrified many on the left and was viewed as a monolithic, political marriage of convenience with pro-NATO, pro-capitalist collusion on the part of the social democratic SPD. With 95% of the Germany parliament controlled by the coalition, an Extra-Parliamentary Opposition (APO) was formed with the intent of generating protest and political activity outside of government. In 1972 a law was passed banning those with a “questionable” political persuasion from public sector jobs.

In a 2008 book about the Baader-Meinhof Gang, author Stefan Aust wrote about the origins of the terrorist West German group. “World War II was only twenty years earlier. Those in charge of the police, the schools, the government — they were the same people who’d been in charge under Nazism. The chancellor, Kurt Georg Kiesinger, had been a Nazi. People started discussing this only in the 60s. We were the first generation since the war, and we were asking our parents questions. Due to the Nazi past, everything bad was compared to the Third Reich. If you heard about police brutality, that was said to be just like the SS. The moment you see your own country as the continuation of a fascist state, you give yourself permission to do almost anything against it. You see your action as the resistance that your parents did not put up.”

On 20 April 1998, an eight-page typewritten letter in German was faxed to the Reuters news agency, signed “RAF” with the machine-gun red star, declaring the group dissolved: “Almost 28 years ago, on 14 May 1970, the RAF arose in a campaign of liberation. Today we end this project. The urban guerrilla in the shape of the RAF is now history.”

In “Broken English” Marianne Faithfull compares the Red Army Faction/Baader-Meinhof Gang to the Puritans of England. She refers to the Cold War which lasted between 1947 and 1991. This was during the American policy of “containment”, articulated by President Harry Truman in 1947,  to stop the spread of Communism, after the People’s Republic of Albania (January 1946), the People’s Republic of Bulgaria (September 1946) and the Polish People’s Republic (January 1947) became satellite states of the USSR. Romania (April 1948), Czechoslovakia (May 1948), Hungary (August 1949) and East Germany (October 1949) all became communist countries under the sphere of Soviet influence. All communist parties in these satellite countries in the emerging Soviet block were dominated by policy makers in Moscow, under the directives of Josef Stalin.

In 1979, Marianne Faithfull sings about the age-old diplomatic freeze, “it’s just an old war/not even a cold war/don’t say it in Russian, don’t say it in German, say it in broken English.” Germany was divided after World War II into East Germany and West Germany. The City of Berlin was divided with the Berlin Wall the most visible expression of the era.

She comments on the outcome of the terrorist attacks by the Red Army Faction/Baader-Meinhof Gang: “lose your father, your husband, your mother, your children/what are you fighting for?/It’s not my reality.” Faithfull’s perspective represents the majority of citizens who do not see taking up arms as a way to resolve political disagreements.

The song took on a wider nuance for listeners tired of the stand-off between Russia and NATO allied countries, especially America and Britain. The election of Margaret Thatcher in May, 1979, had ramped up hawkishness on the world stage. War was in the air with the threat of a nuclear war. War was also on the ground as American operatives and Marxist-insurgents battled in El Salvador; the Soviet Union marched into Afghanistan; the US backed Contra insurgency in Nicaragua and the Iranian Revolution in November 1979 and ensuing Iran hostage crisis. Those tired of the politics of war and longing for a peace dividend snapped up copies of “Broken English”.

“Broken English” climbed to #6 in Vancouver, #3 in Ottawa and #6 in Montreal. The song climbed to #8 on the national pop charts in France (#8). “Broken English” also made the Top 20 in Sweden and the Top 30 in New Zealand. It stalled at #36 on the West German singles chart. Marianne Faithfull’s album, Broken English, sold in the Top Five of the album charts in Austria, France, New Zealand, Sweden and Germany. It also sold over 100,000 copies in Canada. The single release of “Broken English” didn’t make the British charts and only bubbled under the Billboard Hot 100 at #125.

Further new wave explorations followed with Dangerous Acquaintances (1981) and A Child’s Adventure (1983). Her single second single release from her album Dangerous Acquaintances, “Sweetheart”, crossed into the bottom of the Top 30 in Belgium. It got some airplay in France and climbed to #69 on the Australian charts. It did not break into the Billboard Hot 100 or the Canadian RPM singles chart. However, in Vancouver it spent seven weeks on the local charts and peaked at #15.