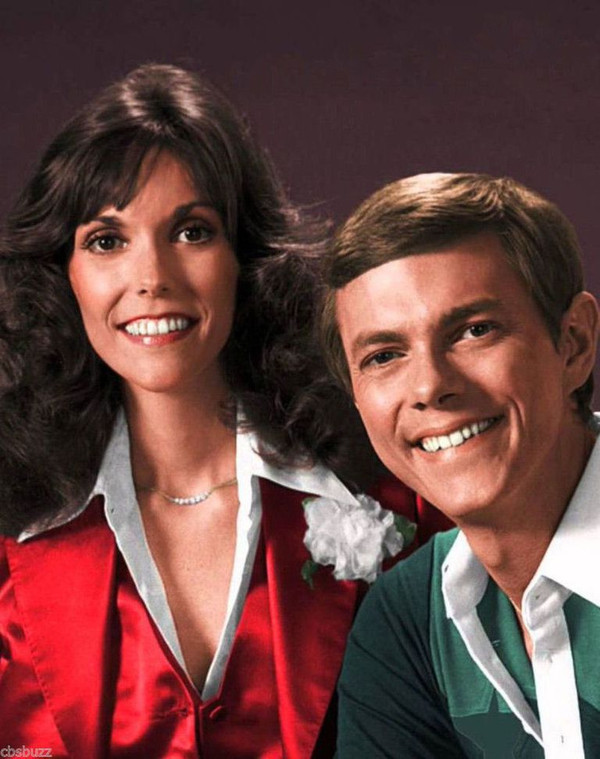 #174: Calling Occupants Of Interplanetary Craft by the Carpenters

Richard Lynn Carpenter was born in 1946 in New Haven, Connecticut. He is a singer, songwriter, musician, record producer, and music arranger, who formed half of the sibling duo the Carpenters, alongside his younger sister Karen. He had numerous roles in the Carpenters including record producer, arranger, pianist, keyboardist, lyricist, and composer, as well as joining with Karen on harmony vocals. He learned to play musical instruments at an early age and was considered a child prodigy. Karen Carpenter was born in 1950, also in New Haven. She enjoyed dancing and by age four was enrolled in tap dancing and ballet classes. The family moved in June 1963 to suburban Los Angeles. At the age of 19, in 1965, Richard Carpenter created the Richard Carpenter Trio with sister Karen and friend Wes Jacobs. Richard played the piano, Karen played the drums, and Wes played the tuba and bass. In 1966 the Richard Carpenter Trio played “Iced Tea” and “The Girl from Ipanema” at the Hollywood Bowl Battle of the Bands. They recorded three songs with RCA in 1967. But their sound was too dissonant with the prevailing psychedelic pop-rock sound in the Summer of Love.

In 1969, the Carpenters got a contract with A&M Records. They released their debut album, Offering, with a minor cover of the Beatles “Ticket To Ride”. In August 1970, the Carpenters released their second album, Close to You. For the title track, “Close To You”, the Carpenters won a Grammy Award for Best Contemporary Vocal Performance by a Duo, Group, or Chorus, and a second Grammy Award for Best New Artist. The Carpenters also were nominated for Grammy Awards in the categories of 1) Album of the Year, 2) Best Engineered Album, 3) Record of the Year, 4) Best Instrumental Arrangement Accompanying Vocals, 5) Song of the Year, and 6) Best Contemporary Song – the later two both for for “We’ve Only Just Begun”. The latter single was a #2 song for four weeks in November 1970 on the Billboard Hot 100. Both “Close To You” and “We’ve Only Just Begun” peaked at #1 in Vancouver. While “Close To You” was a Top Ten hit in five international record markets.

In the winter of 1970, the Carpenters charted “Merry Christmas Darling” into the Top 20 in Vancouver. During 1971, the duo had more success on the pop charts. “For All We Know” climbed to #3 on the national pop charts in the USA, and a song from the film Lovers and Other Strangers. While in Vancouver, the single stalled at #15. In June 1971, “Rainy Days And Mondays” climbed to #2 on the Billboard Hot 100, and #3 in Vancouver. And in the fall of 1971, the Carpenters recorded a song written by Delaney and Bonnie Bramlett and Leon Russell titled “Superstar”. In addition to topping the charts in Vancouver, the single was a Top Ten hit in the USA, Japan and New Zealand. The B-side, “Bless the Beasts and Children”, from the film of the same name, also received airplay.

On July 9, 1971, the Carpenters made their only concert appearance in Vancouver at the Queen Elizabeth Theatre.

In 1972, the Carpenters covered a song originally recorded by Jimmy Clanton in 1965 titled “Hurting Each Other” (and Chad Allen & the Expressions later in ’65). The original had overtones evocative of the Righteous Brothers and the Impressions. But it was an arrangement by Ruby & The Romantics in 1969 which the Carpenters borrowed for their third trip to #2 on the Billboard Hot 100. The Carpenters also took the song to #18 in South Africa.

In 1972 the Carpenters won a Grammy Award for Best Pop Vocal Performance by a Duo or Group for their second album, Carpenters. They also earned Grammy Award nominations that year for 1) Album of the Year, 2) Best Engineered Recording, 3) Best Instrumental Arrangement Accompanying Vocals (for the single “Superstar”) and 4) Best Album of Original Score, Written for a Motion Picture for “Bless the Beasts and the Children”. While “For All We Know” earned the Carpenters an Oscar at the Academy Awards for Best Original Song.

In the summer of 1972, the Carpenters were back in the Top Ten with “Goodbye To Love”, inspired by the 1940 Bing Crosby film Rhythm on the River. And in early 1973, a cover of a song from Sesame Street, “Sing”, also climbed into the Top Ten.

In 1973, returning to the Grammy’s, the Carpenters received a nomination in the Best Instrumental Arrangement Accompanying Vocals category for “Flat Baroque”. In 1974 the duo were back at the Grammy Award gala with a nomination for “Sing” in the Best Pop Vocal Performance by a Duo, Group or Vocal category, and a second nomination for the song in the  Best Instrumental Arrangement Accompanying Vocals category. The following year, the Carpenters received another Grammy Award nomination in the latter category for “We’ve Only Just Begun”. In this case the Carpenters got the nomination, though “We’ve Only Just Begun” was recorded by Singers Unlimited.

In the summer of 1973, “Yesterday Once More” became the Carpenters biggest international hit to date. The single topped the pop charts in Canada and the USA (Cashbox), and made the Top Ten in Australia, Belgium, Ireland, Japan, the Netherlands, New Zealand, Norway and the UK. It was also the first Top 30 hit for the duo in West Germany. Later that year, “Top Of The World” became the Carpenters fourth #1 hit single in Vancouver, and also topped the Billboard Hot 100.

In 1974-75, the Carpenters had their biggest hit single in their career. It was a cover of the Beatles “Please Mr. Postman”. The song peaked at #1 in Vancouver, and internationally on the Billboard Hot 100 in the USA, Australia and South Africa. It also made the Top Ten in Ireland, New Zealand, Switzerland, the UK and West Germany. While in the spring of 1975, the Carpenters had their 11th of 15 number-one hits on the Billboard Adult Contemporary chart with “Only Yesterday”. A third Top Ten hit in Vancouver for the Carpenters in 1975 was “Solitaire”, written by Neil Sedaka.

In 1977, the Carpenters released their eighth studio album, Passage. From the album came their fourteenth and final Top Ten hit in Vancouver titled “Calling Occupants Of Interplanetary Craft”. 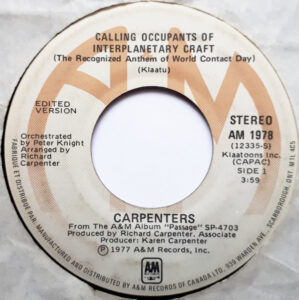 “Calling Occupants Of Interplanetary Craft (The Recognized Anthem of World Contact Day)” was written by the Toronto band Klaatu. They recorded it in 1976. The Carpenters cover of the song included 160 musicians in the recording studio. John Woloschuk, a member of Klaatu and one of the song’s composers, said “The idea for this track was suggested by an actual event that is described in The Flying Saucer Reader, a book by Jay David published in 1967. In March 1953 an organization known as the “International Flying Saucer Bureau” sent a bulletin to all its members urging them to participate in an experiment termed “World Contact Day” whereby, at a predetermined date and time, they would attempt to collectively send out a telepathic message to visitors from outer space. The message began with the words…”Calling occupants of interplanetary craft!”

World Contact Day was designated by the International Flying Saucer Bureau (IFSB) for March 15, 1953. IFSB members focused on the following message during 1953:

Calling occupants of interplanetary craft! Calling occupants of interplanetary craft that have been observing our planet EARTH. We of IFSB wish to make contact with you. We are your friends, and would like you to make an appearance here on EARTH. Your presence before us will be welcomed with the utmost friendship. We will do all in our power to promote mutual understanding between your people and the people of EARTH. Please come in peace and help us in our EARTHLY problems. Give us some sign that you have received our message. Be responsible for creating a miracle here on our planet to wake up the ignorant ones to reality. Let us hear from you. We are your friends.

In 1952, the International Flying Saucer Bureau was established by Acme shear factory worker, Albert K Bender (born 1921) in Bridgeport, Connecticut. This was following claims by U.S Forest Service pilot Kenneth Arnold that in 1947 he had witnessed unidentified flying objects later referred to as flying saucers. At the time he established the IFSB, U.S. Army veteran Bender was a 31-year-old bachelor who lived with his stepfather. The purpose of the IFSB was was to “gather flying saucer information” and to “get all Flying Saucer minded people acquainted with each other….” Bender claimed to have taken numerous “out-of-body trips into deep space.” The IFSB was forcibly closed on January 1, 1954. Bender is credited as the originator (or first widely-known victim) of the Men in Black, whom he reported were monstrous aliens in human disguise from a planet called Kazik in his 1962 book Flying Saucers and The Three Men. 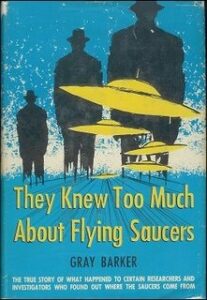 Men in Black (MIBs) are what appear to be male humans dressed in black suits who claim to be government or paramilitary (or even alien) agents and who harass or threaten UFO witnesses to keep them quiet about what they have seen. The Men in Black also drove large black automobiles. Bender claimed to have been given psychic powers in the years that followed. During its brief life, the IFSB had a worldwide membership of over 1,500. Afterward, a British branch, ‘British Flying Saucer Bureau (BFSB)’, was set up by Denis Plunkett.

In 1978, the Carpenters received their final Grammy Award nomination for “Calling Occupants Of Interplanetary Craft” in the Best Instrumental Arrangement Accompanying Vocals category.  It was their eighteenth nomination, of which they earned three Grammy Awards between 1971 and 1978.

In 1997 the science fiction film, Men in Black, was based on the comic book series. All Men in Black references have their genesis in the reports of Albert Bender of the International Flying Saucer Bureau. The 1997 film was nominated for three Academy Awards, winning one for Best Makeup.

By 1978, Richard Carpenter had become addicted to Quaaludes, which he had been taking on prescription in increasing doses since the 1971 tours. On September 4, during an engagement at the MGM Grand in Las Vegas, he decided to quit touring, and the concerts there were curtailed. Richard began treatment for his addiction at a facility in Kansas, for six weeks in January 1979. He decided to take the rest of the year off to relax and rehabilitate. Richard was now sure that Karen was battling with anorexia nervosa but she denied it, saying she simply had colitis. Karen did not want to take a break from singing nor seek professional medical help for her own condition, so she decided to pursue a solo album with adult-oriented and disco material represented an effort to retool her image, But the album was received negatively by A&M and was not released.

Following the cancellation of her solo album and her marriage to Tom Burris on August 31, 1980, Karen decided to record a new album with Richard, who had now recovered from his addiction and was ready to continue their career. The Carpenters: Music, Music, Music featured vocals with Ella Fitzgerald. In 1981, their final studio album, Made in America, included a Top 20 hit “Touch Me When We’re Dancing”.

By the fall of 1982, Karen Carpenter was at a weight of 109 pounds. In the new year she was in divorce proceedings. She died on February 3, 1981. Karen’s funeral was at the Downey United Methodist Church on February 8, 1983. More than a thousand mourners attended, among them her friends Olivia Newton-John, Petula Clark, Dionne Warwick, Burt Bacharach and Herb Alpert.

In 1984 a posthumous album, An Old-Fashioned Christmas, was released. It included the track “Little Altar Boy” – originally recorded by Vic Dana in 1960 – and a non-charting single for the Carpenters in 1984.

A 1987 documentary was released titled Superstar: The Karen Carpenter Story.