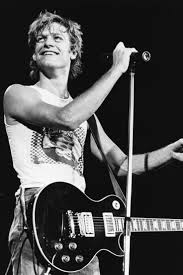 In 1978, at 18, Adams met Jim Vallance through a mutual friend in a Vancouver music store. Vallance was the former drummer and principal songwriter for Vancouver-based rock band Prism. Vallance had recently left Prism to build a career as a studio musician and songwriter. Adams agreed to meet at Vallance’s home studio a few days later. This led to the start of a partnership that has lasted nearly four decades. That same year Adams signed a record deal with A&M records for one dollar. Experimenting with pop music fads, as he had with Sweeney Todd‘s glam rock, Adams first solo single was the disco song “Let Me Take You Dancing”. It is a song he has hardly ever performed live. This is due to his vocals on the recording being sped up to meet the 122BPM dance tempo. The song spent six weeks on the CFUN Top Ten in Vancouver. One of his most successful hits in the 1980s, “Straight From The Heart”, was written in the late 70s.

Adams had a self-titled debut album in early 1980 which resulted in an indifferent response from rock music critics, though it distinguished his sound from his disco-themed first single release. His second album, You Want It You Got It, established the mainstream rock sound he has been associated with ever since. The first single release from the album was “Coming Home” followed by “Fits Ya Good”. The second single made it to #30 on the Canadian RPM singles chart. The song spent at least 8 weeks on the CHUM AM chart in Toronto where it peaked at #16. In Moose Jaw, the tune climbed to at least #13, based on partial chart information online (it may have climbed into the Moose Jaw Top Ten). It also was a Top 40 hit in Ottawa. But “Fits Ya Good” didn’t make the Top 30 on CFUN for hometown boy Bryan Adams. However, his third single, “Lonely Nights” expanded his fan base here in town.

His next album, Cuts Like A Knife, established an international following. “Straight From The Heart” climbed to #15 on the Billboard Hot 100 and the title cut made it to #10. Adams also enjoyed significant singles and album sales in Australia, the United Kingdom, Switzerland, Sweden and Germany. Both “Cuts Like A Knife” and “Straight From The Heart” were nominated for Single of the Year at the 1984 Juno Awards.

Bryan Adams continued to expand his international following with the release of his fourth album, Reckless. It included six very successful singles: “Run To You”, “Somebody”, “Heaven”, “Summer Of ’69”, “One Night Love Affair” and a duet with Tina Turner titled “It’s Only Love”. For that effort Adams and Turner received a Grammy Award nomination for Best Rock Performance by a Duo or Group. To round out a most successful year, Bryan Adams released a Christmas themed single titled “Christmas Time”. “Christmas Time” is a song recorded by Bryan Adams. It was written by Bryan Adams and Jim Vallance. It became Adams’ most popular Christmas song. It was originally released on clear, green vinyl with a picture sleeve. It was written and recorded in Vancouver, British Columbia. Over twenty years after it was first recorded, the song still receives significant radio airplay each year during the Christmas season. No music video was shot for the single, although there was a live video made for its B-side, “Reggae Christmas”, featuring a guest appearance by Pee Wee Herman. The song won Gold Single Award for 50,000 sales of the 45 RPM single in Canada. It reached #4 at Billboard Christmas Chart, but did not chart on the Billboard Hot 100.

“Christmas Time” contains universal themes that make the season aspirational for listeners, regardless of their own religious affiliation. In a world of perpetual warfare, the hope for peace on earth is one that speaks to the human spirit. The song appeals to the part of us that sees beyond superficial differences like skin color, reminding us that we have the potential to live in harmony. There is also an appeal to being free, that springs more from an appeal to democracy than any particular Biblical teaching. Traditional themes at Christmas focus on the birth of Jesus of Nazareth, peace, hope, joy and love. There may be something about  the observance of Christmas as a time for family and friends to be together with an intention to be loving and harmonious that makes a positive difference. In her speech broadcast across the British Commonwealth, Queen Elizabeth II reminded her subjects that Christmas is a season that connects us to “home.” She said, “We think of our homes as places of warmth, familiarity and love; Of shared stories and memories, which is perhaps why at this time of year so many return to where they grew up. There is a timeless simplicity to the pull of home. For many, the idea of “home” reaches beyond a physical building – to a home town or city.” Though, Christmas for many people is a very stressful time when their families don’t end up being able to get along very well and they fall into old habits of dysfunction. This includes arguments over the dinner table about politics.

Since then Bryan Adams has recorded eleven more studio albums that were all best-sellers. He has charted 33 singles into the Top 30 on the Canadian RPM singles chart. This includes eleven number one singles in Canada, beginning with his international selling signature hits “Everything I Do (I Do It For You)” and “Have You Ever Really Loved A Woman?”

Both of these were nominated for Academy Awards in the category of Best Original Song. The former for Robin Hood: Prince of Thieves, and the latter for Don Juan DeMarco. “Everything I Do (I Do It For You)” was nominated for four Grammy Awards, and won for Best Song Written for a Motion Picture, Television or other Visual Media. The single is Adams most successful having sold over 15 million copies. While “Have You Ever Really Loved A Woman?” received two Grammy Award nominations.

In 1997 Bryan Adams was back at the Grammy Awards with two more nominations for “Let’s Make This A Night To Remember” and “The Only Thing That Looks Good On Me Is You”.

A third song nominated for Best Original Song at the Academy Awards was in 1997 for “I Finally Found Someone”, a song from the film The Mirror Has Two Faces. The song also received a Grammy Award nomination for Best Pop Collaboration with Vocals in 1998.

Other notable songs played on oldies stations decades later are “All For Love,” a collaboration with Sting and Rod Stewart, and “Please Forgive Me” – – the latter nominated at the Junos for Single of the Year in 1995. In 1999 Bryan Adams won a Juno Award for Best Songwriter. And in 2000 he won a Juno for Best Male Artist.

Adams has been awarded the Order of Canada for contributions to popular music and philanthropic work via his own foundation, which helps improve education for people around the world. As of 2018 he has sold over 100 million records. Adams returns to Vancouver from time to time, but resides in his home in Chelsea, England, and also in his second home in Paris, France.

Over the years Bryan Adams has been nominated for 61 Juno Awards, winning 20. His most recent Juno Award was given to him in 2020 for Shine A Light – his 14th studio album – in the category: Adult Contemporary Album Of The Year.