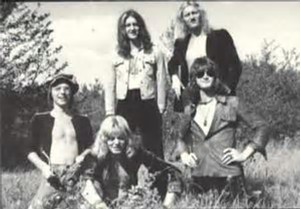 Fludd had its roots in a band called The Pretty Ones, formed by Ed Pilling and Greg Godovitz. The band was briefly part of Toronto’s Yorkville scene in the 1960s, but broke up before achieving much commercial success. Pilling and his brother Brian then moved to Birmingham, England, where they formed a band called Wages of Sin and spent some time touring as a backing band for Cat Stevens in 1970. However, disagreement over musical direction with Stevens led the brothers to return to Toronto by the end of the year. Inspired by the then-emerging psychedelic blues rock sound of British acts such as Small Faces, they then reunited with Godovitz, and recruited drummer John Andersen and guitarist Mick Walsh to create Fludd.

Fludd’s debut album was self-titled and they had their first hit with “Turned 21.” The song peaked at #15 in Vancouver, edging out its climb in Toronto to #16. After the record Mick Walsh was replaced by Mick Hopkins on guitar. He had been in the band, Wages of Sin, with Ed Pilling. Fludd’s second single was the non-album single, “Get Up, Get Out, Move On“, released in 1972.

The band lost its new guitarist and instead added keyboardist Peter Csanky. They were able to get a contract with Daffodil Records. In the era of sexual liberation Fludd proposed to Daffodil Records that the title of their follow up album to be Cock On. The band members of Fludd thought it would be a good for promotion if they displayed a cover image of the band posing as flashers, wearing overcoats but naked underneath. Daffodil Records distributor, Capitol Records didn’t think this was a good idea. Consequently, Fludd’s second album was was released as …On!

That album’s singles “Always Be Thinking of You”, “Yes”, and “C’mon, C’mon”, were all minor hits in Canada. Daffodil agreed to let them make one more album and sent them to Mike Oldfield’s studios in England to record. Since Oldfield was busy recording his forthcoming album, Tubular Bells, the band faced delays with getting time to record in the studio. The sessions ended up being cancelled. Daffodil Records went back to the …On! album and decided to release “Cousin Mary”, the song that would become their biggest selling single. “Cousin Mary” is about a woman who is a war veteran and who also lost her husband when he died in the field of battle. While other suitors come to call: “knights and kings in armor,” her priority is now travel. Canadian listeners all knew someone who was widowed from a war. Many families had stories of mothers, aunts, cousins and nieces who’d lost their husbands in World War I, World War II and the Korean War. These battles formed part of the backdrop for some radio listeners who resonated with the story of Cousin Mary and her resort to travel, presumably on a widows pension from the army. We don’t know how young her husband was when he died in battle. But for many who’ve lost a spouse under these circumstances, it tempers any eagerness to remarry.

The tune peaked at #11 in Vancouver, only bested by Kamloops where the song climbed to #6. In Toronto the song stalled at #19 on CHUM. Fludd went on to record another album. In 1974, Fludd performed a free concert at Nathan Phillips Square in Toronto for over 50,000 fans.

There were a number of lineup changes. Jim Chrichton, Steve Negas and Peter Rochon eventually moved on to form the core of Saga. Though Saga went on to sell over 8 million records in the 1980’s, they only sold 250,000 in Canada. Saga’s fan base was in Europe.  Brian Pilling got cancer and the group was unable to tour to support the new album. Brian Pilling later died of cancer in 1978.

In the 2000s Fludd reunited and went on to tour at a number of classic rock festivals and concert stages. Their reformed band was made up of Ed Pilling, his younger brother Steve Pilling, Scott Shelson on bass guitar, and Jim Crichton.