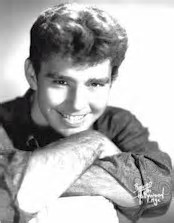 Buddy Wayne Knox was born in 1933 Happy, Texas, a small farm town in the Texas Panhandle a half hour south of Amarillo. During his youth he learned to play the guitar. He was the first artist of the rock era to write and perform his own number one hit song, “Party Doll“. The song earned Knox a gold record in 1957 and was certified a million seller. Knox was one of the innovators of the southwestern style of rockabilly that became known as “Tex-Mex” music.

From that one session Buddy Knox would receive two gold records in 1957, one for “Party Doll” and the other for a song that Jimmy Bowen sang and co-wrote with Knox called “I’m Sticking With You.” “We didn’t know what we had just done,” Knox recalls, ” All we wanted to do was record our music and sell it around the college. This was just a fun trip for us.” On October 23, 1957, Buddy Knox appeared in concert at the Georgia Auditorium in Vancouver, along with Buddy Holly and The Crickets, Eddie Cochran and Frankie Lymon and the Teenagers.

In the early 1960s Knox signed with Liberty Records. With this change Knox released several more mainstream pop records, featuring string arrangements and backing vocalists at the suggestion of producer Tommy “Snuff” Garrett. “Lovey Dovey” and “Ling-Ting-Tong” were the only ones that got much airplay. Both of these were much bigger hits in Vancouver than in America. The sound captured on these recordings was a distinct departure from his earlier rockabilly work for Roulette. Knox’s recordings now sounded more similar to other mainstream pop artists of the time, like Johnny Burnette and Bobby Vee. Intro:
There’s a busy-body woman in the paper,
Gives advice to the troubled and alone (oh yeah).
My girl wrote her about me.
So, I’m writing this letter to inform:

Dear Abby, I read what my girl had to say,
in yesterday’s paper, everybody read about me.
She wrote that I was cruel and untrue,
and you advised her to find somebody new.
Dear Abby, please answer my letter today.

Dear Abby, you gotta hear all the facts.
My girls letter was a jealous and malicious act.
How can I be cruel when she’s such
a heartbreaker and I love her so much.
Dear Abby, please answer my letter today.

“Dear Abby” was the B-side to the non-charting “Three Way Love Affair”, Knox’s fourth single in a row to miss the Billboard Hot 100. The A-side flopped everywhere. “Dear Abby” only made the Top 30 in Fresno, California, and the bottom of the WIBG Top 99 in Philadelphia. But with his popular concerts in Vancouver, “Dear Abby” gave Buddy Knox his best success with the disc  peaking at #16.

Dear Abby is a column started in 1956 by Pauline Phillips at the San Francisco Chronicle. She adopted the pen name Abigail Van Buren from the first name of Biblical figure Abigail in the Book of I Samuel and the surname of the eighth President of the  United States, Martin Van Buren (1837-1841). The column was syndicated by McNaught Syndicate from 1956 until 1966. In 1966 it was bought by Universal Press Syndicate. In 2017 they continue to promote Dear Abby as a column “well-known for sound, compassionate advice, delivered with the straightforward style of a good friend.” Abby was born Pauline Esther Friedman, and her twin sister was born Esther Pauline Friedman. Pauline Phillips got her idea for a column since her sister Esther, nicknamed Eppie, got hired by the Chicago Sun-Times to write the Ask Ann Landers column created by Ruth Crowley for the paper in 1943.

Phillips sister, Eppie wrote the Ask Ann Landers column from 1955 to 2002. In her first column, published in The San Francisco Chronicle on January 9, 1956, Phillips (as Abigail Van Buren) gave forthright advice to a 16-year-old who had never been kissed, a fiancee who wanted to know if her diamond was real and a Bay Area secretary who was having an affair with her boss. “Of course he won’t marry you,” Mrs. Phillips snapped. “Why should he? He’s getting the whole show for the price of the amusement tax.”

Phillips column and influence grew quickly. Within two years Dear Abby was in 172 newspapers, and Mrs. Phillips, who started at $20 per article, was making a six-figure salary, or about $850,000 US in 2017 dollars. Over the 44 years she wrote her column, at her peak her syndicate had over 100 million readers worldwide. Pauline Phillips wrote the Dear Abby column from 1956 to 2000, at which time her daughter, Jeanne Phillips, began to write as Abigail Van Buren. Pauline Phillips died in 2013 at the age of 94.

The columns of both Ask Ann Landers and Dear Abby are filled with letters asking advice about what to do with cheating spouses, angst-ridden teens, bossy mothers-in-law and annoying neighbors along with stories of everyday kindness and heartbreaking tragedy. As of 2017 Dear Abby has a worldwide readership of 110 million.

With the popularity of the Dear Abby column, Buddy Knox may have hoped that the instant recognition of the popular advise column would translate into a hit single. In his song he writes to Dear Abby in response to his girlfriend’s letter to Dear Abby, a letter so thinly veiled that all the folks in town know exactly who the girlfriend in talking about. The unflattering description of him as cruel and untrue needs to be corrected, since Knox relates “I went over last night and somebody else was there.” The drama of the relationship Knox is in should have been obvious to most listeners who might have advised him to just give her up. Nonetheless, there were enough record buyers in Vancouver who could relate to the dynamics of accusation, betrayal and still being “in love” that they snapped up the disc. And it’s true that sometimes the heart has its own reasons that the head just doesn’t understand.