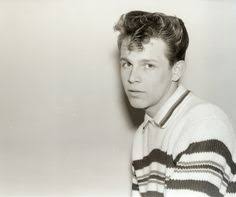 #892: Don’t You Sweetheart Me by Bobby Curtola

Bobby set out on his first Western Canadian Tour in the fall of 1960. From there Curtola went on to become a trailblazer. He toured the first coast to coast tour circuit in Canada. In 1961 he went to Nashville to record with Bill Porter for RCA Studios. That relationship continued for decades. “Don’t You Sweetheart Me” was his first Top Ten hit in Canada. The song climbed to #1 in Winnipeg, #4 in Vancouver and #5 in Toronto. “Don’t You Sweetheart Me” is a classic teen story of a guy whose girlfriend has dumped him. Adding injury to insult, she calls him “sweetheart,” when he knows she’s been going out with somebody new. As she’s made a laughing stock of their dating relationship by two-timing him. Making a laughing stock of someone, or something, is to have the object of the laughing stock subjected to general mockery or ridicule. The guy in the song is pissed off with the way their relationship has come undone. Yet, despite this, he longs to have her back in his arms again. So, no matter how disappointed he is with her, this guy is still enamored enough to fantasize about having a second chance with her. He imagines she’ll dump her new boyfriend and return to him.

Australian therapist and contributor to Parenting Magazine in New Zealand, Karen Young, has a number of things to say about toxic relationships. In 2015, she wrote an article titled, “When It’s Not You, It’s Them: The Toxic People That Ruin Friendships, Families, Relationships.” Young states that when you’re in a relationship “with someone who is toxic, chances are you’ve been bending and flexing for a while to try to make it work. Stop. Just stop.” Young describes 15 versions of toxic people. She offers a name for each of these toxic types. One of them Young writes about she describes as The Taker. Her advice: “all relationships are about give and take but if you’re with a taker, you’ll be doing all the giving and they’ll be doing all the taking. Think about what you get from the relationship. If it’s nothing, it might be time to question why you’re there. We all have a limited amount of resources (emotional energy, time) to share between our relationships. Every time you say ‘yes’ to someone who doesn’t deserve you, you’re saying ‘no’ to someone who does.” In this song it should be clear to the guy that he hasn’t gotten much out of the relationship while they were together. She took from him and then she took off.

Another version of a toxic type Karen Young advises we avoid is The Manipulator. She advises, “manipulators will steal your joy as though you made it especially for them. They’ll tell half-truths or straight out lies and when they have enough people squabbling, they’ll be the saviour. ‘Don’t worry. I’m here for you.’ Ugh. They’ll listen, they’ll comfort, and they’ll tell you what you want to hear. And then they’ll ruin you. They’ll change the facts of a situation, take things out of context and use your words against you. They’ll calmly poke you until you crack, then they’ll poke you for cracking.” In “Don’t You Sweetheart Me”, the guy in the song is naming that his former girlfriend is being manipulative when she calls him “sweetheart.” Why say this after dumping him and leaving him for another guy? Sometimes, a dating relationship needs to come to an end. But, it seems this gal made a point of making a “laughing stock” of their relationship with it’s negative consequences in their social circles. Furthermore, she built up his hopes with promises to be true, while seemingly having her eye out for a better catch.

This brings us to a third example of toxic types that Young describes as The Sideways Glancer. This type is constantly admiring the human form, other people’s bodies who are the same sex as you. We all admire the human form. Artists have painted it, sculptors have shaped it and many have sung along with Frank Sinatra to “Strangers In The Night”.  But when the sideways glancing is “done constantly in your company – in your face – it’s tiring, and it feels bad. You deserve to be first and you deserve to feel noticed. That doesn’t mean you have to be first all the time, but certainly you shouldn’t have to fight strangers for your share of attention.” In the song, “Don’t You Sweetheart Me”, one might wonder, how long was this dating relationship actually healthy? Was the guy not picking up how restless his girlfriend must have been? She was clearly flirting with at least one other guy. Then she ditched our mournful fellow in the song and made him a “lonely one.” She didn’t break off the dating relationship and risk just being single out of her own dissatisfaction with this guy who’s smitten with her. She had someone else lined up before she broke things off.

Between 1960 and 1968 Curtola had continual single and album releases on the Tartan label in Canada. The managers and main songwriters were brothers Dyer and Basil Hurdon. The Del-Fi label released some of those singles in the US. His biggest hit, “Fortune Teller”, was released in 1962 and went Gold in Canada. The now Rock n’ Roll Hall of Fame DJ, Red Robinson, was key in the success of “Fortune Teller”. Seeing its potential internationally, Robinson sent it to Disc Jockey’s in Seattle at KJR and Hawaii’s KPOI in Honolulu. A major US record deal was signed and “Fortune Teller” went on to sell two and a half million copies. Bobby Curtola was invited to tour with Dick Clark and his Cavalcade of Stars. While on tour in England that same year, Bobby met The Beatles and appeared on the famous British TV variety show Thank Your Lucky Stars.

Bobby Curtola, had his seventh chart hit in Vancouver with “I Cry and Cry.” It was the fifth of seven top thirty hits for Curtola on the Vancouver pop charts in 1962. The follow up hit was “I Cry and Cry”, and the B-side to “Fortune Teller,” titled “Johnny Take Your Time”, had a separate chart run beginning with the final chart week for “Fortune Teller”.

While on tour in England in 1963, Bobby met The Beatles and appeared on the famous British TV variety show Thank Your Lucky Stars. The episode on June 15, 1963, also featured performances by John Leyton, Jackie Trent, Kenny Ball, and the Bachelors. Other Top Ten hits in 1963 for Bobby Curtola in Vancouver include “Indian Giver” and “Three Rows Over”.

In June of 1964, Bobby Curtola got to sing what would become an ear-worm for radio listeners across all radio and TV stations in the mid-sixties. He became the first pop singer to record a jingle that sounded like a Top 40 Hit Single. The jingle was “Things Go Better with Coke.” He signed an exclusive contract with Coca-Cola to be their #1 Spokesman. Bobby, also co-wrote “The Real Thing” which was used for the commercial “Coke’s The Real Thing.” After turning twenty-one, Bobby was interviewed by John Pozer on his TV show in Ottawa, Saturday Date, which ended with the pair toasting to his success with coke bottles. In the interview Curtola reveals that the jingle was made in Nashville and that Elvis’ former backup group, The Jordanaires, backed Curtola in recording the commercial. Bobby Curtola went on in 1965 to host The After Four Show in Toronto. In 1966 he won a RPM Gold Leaf Award for becoming the first Canadian to have an album go gold. In 1973 Curtola became the CTV host of Shake, Rock and Roll. For many years he also hosted the Miss Canada and Teen Canada beauty pageants. And from 1972 into the mid-90’s Bobby Curtola had a career performing in Las Vegas, often as the opening act of Bob Hope. Over the years Bobby Curtola has toured Asia, Europe, South America and across North America.