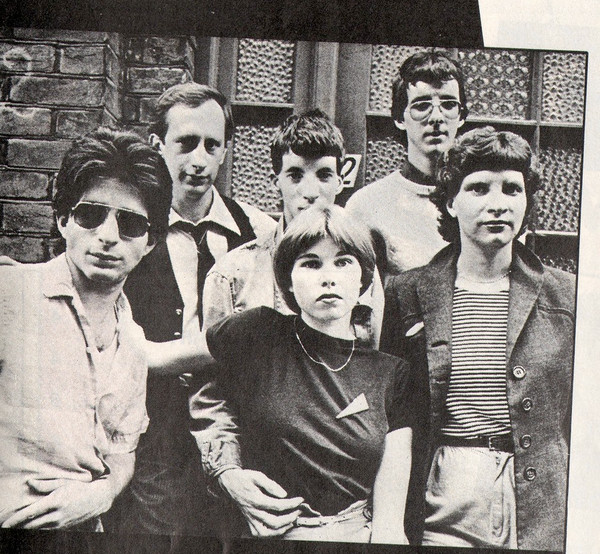 Martha Johnson was born in Toronto, Ontario, in 1950. Johnson worked in Toronto as a medical receptionist. She started her career playing the organ with cover band “Oh Those Pants”. She then was part of Toronto band the Doncasters in the early 1970s. Johnson joined David Millar, Mark and Tim Gane, and Carl Finkle to form the band Martha & the Muffins in 1977. Martha & the Muffins emerged from the early punk/new wave/art pop scene which was centered around various clubs along Toronto’s Queen Street West and the Ontario College of Art, where Millar and Mark Gane were students. Martha Johnson played keyboards, David Millar and Mark Gane played guitar. Gane’s brother, Tim, was the band’s drummer. And Carl Finkle played bass guitar. The band had their debut performance at the Ontario College of Art Hallowe’en party in October 1977. Some of the clubs they played at included the Beverly and the Rivoli. Regarding the name for the band, Mark Gane recalls “We decided to use it as a temporary name until we could all agree on something better.” They had wanted a name that was edgy, but not aggressive like the Sex Pistols.

Martha & the Muffins were influenced by the Talking Heads and other new wave bands. In 1978, Andy Haas joined the band on saxophone. Meanwhile, David Millar shifted to work as the bands’ sound engineer. He was replaced by Martha Ladly, also playing on keyboards and backing vocals. Now Martha and the Muffins had two singers/musicians named Martha. In 1978, they released their first independent single, “Insect Love”.

In 1979, a demo tape was sent to Glenn O’Brien, record reviewer for Andy Warhol’s Interview magazine. This was forwarded to aa A&R rep for Virgin Records. In short order, Martha & the Muffins flew to England to record their debut album at the Manor Studios. Metro Music captured the essence of New Wave. The album showcased irresistible bass grooves, chiming guitars, sudden bursts of saxophone, and instantly memorable tunes about life in the city and its suburbs. The debut single “Echo Beach” had all of this going for it. 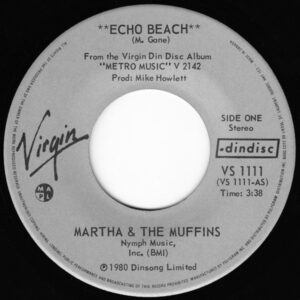 “Echo Beach” is a song about the loneliness of the cubicle worker. The office clerk is stuck in a 9-to-5 job, detailing how “my life is very boring.” As a way to help pass the time, Martha Johnson sings about the determination of the office clerk to return to Echo Beach. She describes the setting: “On a silent summer evening, the sky’s alive with lights. A building in the distance, surrealistic sight. On Echo Beach, waves make the only sound. On Echo Beach, there’s not a soul around.”

The song was written by bandmate Mark Gane while he was working checking wallpaper for printing faults. Gane found the work rather tedious, and his mind wandered to places and times he would like to live over again. One such time was an evening spent at Sunnyside Beach, Toronto, on the shoreline of Lake Ontario in the summertime. ‘Echo Beach’ was a reference made to a faded time and place gone in the lyrics of the song “Hiroshima Mon Amour” by the band Ultravox. The map shown on the cover of one version of the single is of the Toronto Islands. The repeated line at the end of the song – “Echo Beach, far away in time” – adds to the sense of urgency to make a shift from a boring life to one embracing the beauty and peace of natural settings.

On November 16, 1980, Martha and the Muffins appeared in concert at the UBC Student Ballroom. The following night they gave a second concert in Vancouver at the Commodore Ballroom. A followup single from the album, Trance and Dance, “Paint By Number Heart”, peaked at #20 in Toronto in the fall of 1980. In 1981 “Women Around the World at Work” climbed to #3 in Sydney (NS), and into the number ten spot on CHUM in Toronto, and in Halifax (NS). The single was from the album This is the Ice Age. After the album was released, Tim Gane left the band and was replaced on drums by Nick Kent. As well, Carl Finkle left the band and soon became manager of new wave band The Spoons. He was replaced by Jocelyn Lanois (sister of budding record producer Daniel Landis).

By 1981, Martha Ladly left the band before This is the Ice Age, after winning a scholarship, and returned to the UK to study. While there, she worked with Peter Saville, designer of the Factory label. Ladly contributed the Futurist-inspired painting that graced the cover of New Order’s Factus 8 1981-82 EP. She also suggesting the title for Orchestral Manoeuvres in the Dark’s Architecture and Morality album, and subsequent hit single, “Tesla Girls.” Martha Ladly did not entirely abandon her performing career, however. She sang backing vocals and played keyboards on The Associates’ Sulk (appearing with them on Top of The Pops) in 1982. She even joined Robert Palmer for a tour of Japan in 1986. As well, Ladly released several dance club singles.

Meanwhile, in early 1982, Martha & the Muffins were back on the CHUM charts in Toronto with “Swimming”, which climbed to #16. While in 1983, the band shortened their name to M+M and released the album Danceparc. The title track, “Danceparc (Everyday It’s Tomorrow)”, made it into the Top 20 in Ottawa and Montreal.

Martha and Mark spent much of the ’90’s scoring music for various television and film projects. They contributed a cover of “Shades of Scarlett Conquering”, for the Joni Mitchell various artists 1992 tribute album Back to the Garden. The birth of their daughter in 1992, inspired Martha to write and record an album of original children’s music, Songs From The Tree House, which won the 1996 Juno Award for Best Children’s Album. Over the years, Martha & the Muffins/M+M has released eight studio albums. The most recent album was Delicate in 2010.

Martha Ladly worked with Peter Gabriel from 1992 to 2001, as manager of Real World Design and editor of Real World Notes. More recently, Ladly has been an Associate Professor of Design at the school where she began, now known as the Ontario College of Art and Design. Her  office window is a stones’ throw from the Toronto intersection of Queen and Beverley, where once she played. She is currently the Graduate Program Director at the Ontario College of Art and Design.

Andy Haas has continued working as a musician in and out of the studio with a variety of groups and musical projects. Jocelyn Lanois went on to join Canadian folk band Crash Vegas.

One response to “Echo Beach by Martha & the Muffins”