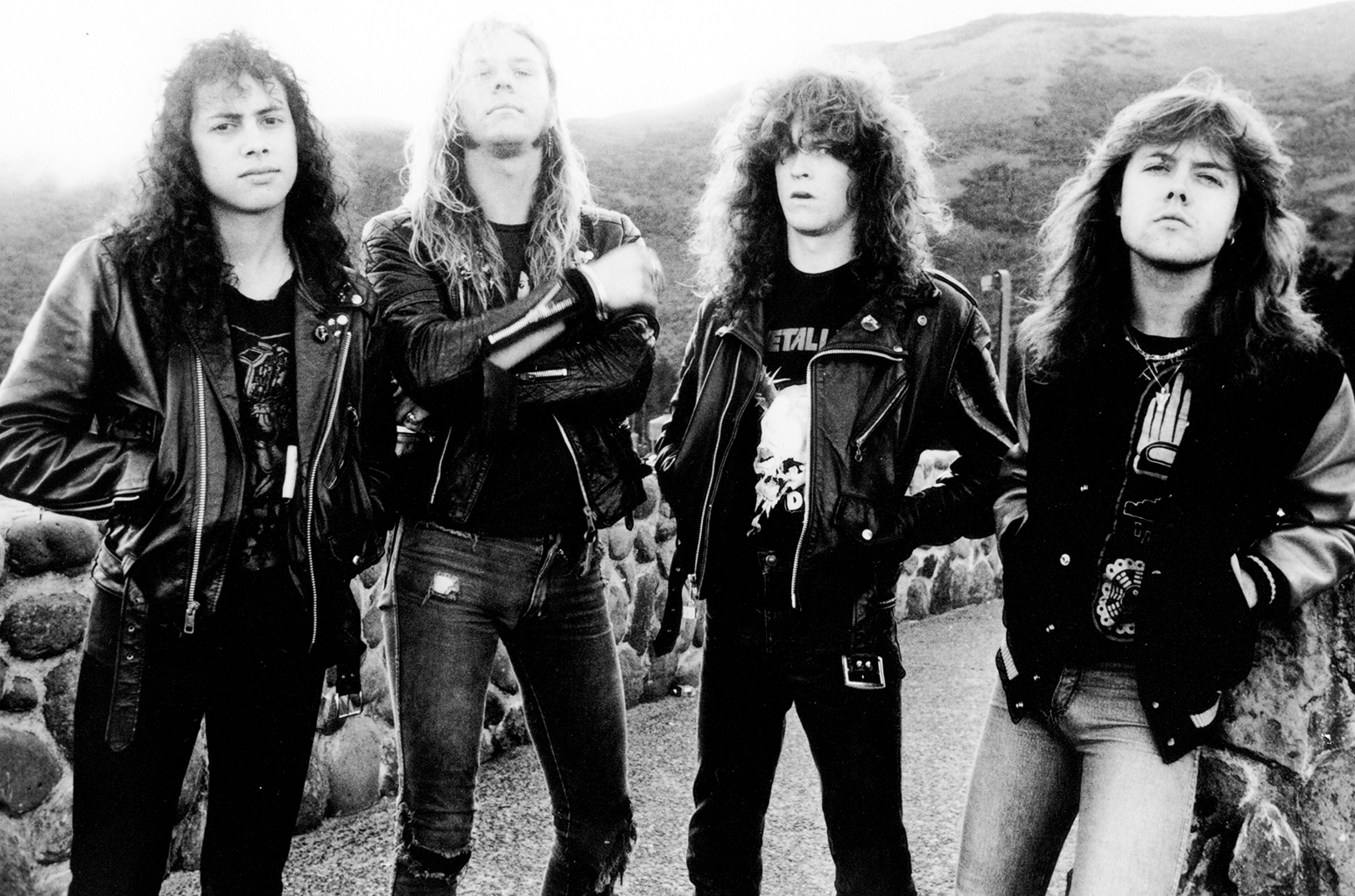 James Alan Hetfield was born in 1963 in suburban Los Angeles. His mom was a light opera singer and his dad a truck driver. Hetfield was nine years old when he first began piano lessons, after which he learned to play the drums and finally, at the age of 14, he started to play guitar. He graduated from high school in 1981. Lars Ulrich was born in 1963 in Denmark. His father was a professional tennis player. His paternal grandparents were persecuted in World War II by the Nazi’s since the grandmother was Jewish. This family history taught young Lars about prejudice, and how governments can scapegoat categories of people within its populace. When he was nine years old, his father bought tickets to a Deep Purple concert. in Copenhagen. Within a few years Lars was playing a drum kit. Lars was ranked in the Top Ten tennis players in his age group in Denmark. He moved to California in 1980 and planned to enter a seven-man competition in Newport Beach. But, since he didn’t make the cut, Ulrich switched his focus from tennis to music.

James Hetfield and Lars Ulrich met each other in Downey, California, in 1981. They decided to form a heavy metal band which they called Metallica. After some lineup changes, they hired Kirk Lee Hammett on lead guitar. Hammett was born in 1962 in San Francisco. He began to play guitar at age 15. In 1979, at the age of 16, Hammett formed a thrash band named Exodus, after the Leon Uris novel. In 1983 Metallica was ready to record their debut studio album, Kill ‘Em All. However, due to Metallica’s lead guitarist Dave Mustainte’s substance abuse and violent tendencies, he was fired shortly after Metallica began to go to the recording studio, Since Exodus had begun to make a name for itself, in short order a phone call came to Kirk Hammett inviting him to join Metallica. Kill ‘Em All reached #12 on the Finnish album chart in 1983.

The band’s next album, Ride the Lightning, sold over four million records in the US alone, and climbed to #9 on the Finnish album chart. From the album, the track “For Whom The Bell Tolls”, was nominated in 1996 for a Grammy Award in the Best Metal Performance category. Their third studio album, Master of Puppets, sold even better. It climbed to #7 in Finland, #12 in West Germany #14 in Sweden and #18 in Switzerland.

As part of the Ride the Lightning tour, Metallica made their first appearance in Vancouver at the New York Theatre at 630 Commercial Drive on March 18, 1985.

Jason Newsted was born in Battle Creek, Michigan, in 1963. He grew up on a farm and at the age of six was given the responsibility of looking after animals. He was tasked with looking after hundreds of chickens and rabbits. He later recalled, “It’s where I learned about life – seeing a baby cow born right in front of your eyes when you’re eight years old is pretty intense…” He learned to play guitar at age nine and bass guitar at age 14. Newsted was in the Arizona thrash band Flotsam and Jetsam from 1981.

On September 27, 1986, during the European leg of the Damage, Inc. Tour Metallica’s bass guitarist Cliff Burton died when the band’s tour bus crashed. Recovering from the loss, the bandmates auditioned fifty musicians to replace Burton, and hired Jason Newsted. With Newsted as part of the band, this completed the classic lineup for Metallica. On December 19, 1986, Metallica appeared in concert in Vancouver at the Pacific Coliseum.

Hetfield, Ulrich, Hammett and Newsted, recorded …And Justice For All. The 1988 album sold over five million copies in the USA. It climbed to #6 on the Billboard 200 album chart, #3 in West Germany, #4 in the UK, #5 in Sweden, #7 in Switzerland, and #8 in Finland and Norway. On May 31, 1989, Metallica came back to Vancouver for a concert at the Pacific Coliseum.

In 1989, a track from …And Justice For All titled “One” was released as a single. It climbed to #1 in Finland, #3 in the Netherlands and Sweden, #4 in Norway, #5 in Australia and Denmark and #13 in New Zealand and the UK. “One” is considered one of the greatest heaven metal songs of all time, with an outstanding guitar solo. “One” earned Metallica a Grammy Award for Best Metal Performance in 1990. They won the award again in 1991 for “Stone Cold Crazy”, and for a third year in a row in 1992 for Metallica.

Metallica returned to the recording studio in 1991 to release the self-titled album Metallica. The album shot the band to number-one on album charts in Australia, Canada, Norway, New Zealand, Switzerland, the UK, USA and West Germany. The album also climbed to #4 in both Finland and Sweden. Eventually, Metallica sold over 24 million copies worldwide.

From Metallica came a series of single releases to generate interest in the album. 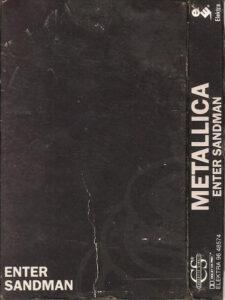 “Enter Sandman” is a song about tucking a young son into bed. After saying his prayers, everything is alright as the boy falls asleep. Until Sandman comes. The boy is warned to sleep with one eye opened and to grip his pillow tight. When Sandman enters, the boy goes to a troubled dreamland: “Dreams of war, dreams of liars, dreams of dragon’s fire. And of things that will bite…”

In the bridge of “Enter Sandman”, the band sings lines from an 18th Century children’s bedtime prayer. Originally written by Sir George Wheeler in 1698, in his book The Protestant Monastery. The most popular version of Wheeler’s prayer is found in 1784 edition of The New England Primer (the most popular textbook for children in the American colonies):

Placing this children’s bedtime prayer in the middle of “Enter Sandman” sharpens the contrast between innocence and menace. It is as if the content of the dreams Sandman gives the boy – nightmares really – are so frightening that the boy will be frightened to death – that he will literally “die before I wake.”

The bridge also borrows the line “Hush little baby, don’t say a word” from a southern American lullaby. In the original, the child is promised gifts for sleeping quietly: A mocking bird, a diamond ring, a looking glass, a billy goat, a cart and bull, a dog named Rover, and finally a horse and cart. Near the end of the lyrics to “Hush Little Baby”, the child is told “I’ll sing this lullaby for you. Sleep child, for dreams always come true.” But, in with the reference to “Hush little baby, don’t say a word” (and all that follows), in “Enter Sandman” the ‘dreams of war, liars, dragon’s fire and things that will bite’ – “the beasts in your head” – are implicitly predicted to manifest in the boys waking life.

The followup single from the album, “The Unforgiven”, was a Top Ten hit in Australia and Finland. In the midst of single releases from Metallica, the band came to Vancouver for two concerts on May 23rd and 25th, 1992, at the Pacific Coliseum.

The third single from Metallica, “Nothing Else Matters”, was a number-one hit in Belgium, Denmark, Finland and Poland, and a Top Ten hit in Australia, Austria, Belgium, France, Germany, Ireland, Italy, the Netherlands, Norway, Spain, Switzerland and the UK. The single sold over 3 million records. Two more singles from the album, “Wherever I May Roam” and “Sad But True”, both charted in the Top Ten in Norway.

On July 17, 1994, Metallica returned to Vancouver for a performance at the Thunderbird Stadium.

In 1996, Metallica released the album Load. The debut single, “Until It Sleeps”, became their biggest charting pop hit. It topped the pop charts in Australia, Denmark, Hungary and Sweden, It also was a Top Ten hit in Belgium, Canada, the Czech Republic, France, Iceland, Ireland, Italy, the Netherlands, Norway, Scotland, the UK and #10 on the Billboard Hot 100. A followup single from the album, “Hero Of The Day”, became a Top Ten hit in Australia, Canada, Denmark, Finland, Hungary, Norway, and Sweden.

In 1997 Metallica returned to the recording studio to produce Reload. The debut single, “The Memory Remains”, was a number-one hit in Finland and Iceland. It also cracked the Top Ten pop charts in Australia, Canada, Hungary, Norway, Spain and Sweden. “The Mystery Remains” tells the story of a faded artist who goes insane from losing her fame. Metallica had Marianne Faithfull on backing vocals for the song. On May 23, 1997, Metallica performed in concert at General Motors Place.

A final track from Reload, “Fuel”, was a Top Ten hit in 1998 in Australia, Finland and Hungary. “Fuel” earned Metallica another Grammy Award nomination for Best Hard Rock Performance. On September 4, 1998, Metallica gave a concert at the Thunderbird Stadium at the University of British Columbia.

In late 1998, Metallica released an album of cover songs titled Garage Inc. It included a cover of the Bob Seger tune “Turn The Page”. The single was a Top Ten hit in 1999 in both Canada and Finland. A second cover of the Irish standard, “Whiskey In The Jar”, landed Metallica in the Top Ten in Greece, Hungary and Norway. The song won a Grammy Award for Best Hard Rock Performance in 2000. Metallica had won a Grammy Award in 1999 for “Better Than You” in the Best Metal Performance category.

And in 2000, “No Leaf Clover” was a Top Ten hit for the band in Norway. As well, in 2000 “I Disappear” was featured in the soundtrack for the film Mission Impossible 2. The single became a Top Ten hit in Finland, Greece, Italy, Norway and Spain.

In 2001 the band won another Grammy Award for “The Call of Ktulu”, in the Best Rock Instrumental Performance category.

In 2001 Jason Newsted left Metallica, and was replaced by bass guitarist Robert Trujillo. Newsted had wanted the band to take a year break for him to focus on a side project, which was rejected by the other bandmates.

In 2008, Metallica released Death Magnetic, The album received several Grammy Award nominations, winning Best Recording Packaging. On December 2, 2008, Metallica came to Vancouver and appeared in concert at General Motors Place to promote the album. The debut single did well outside America, peaking at #1 in Finland, Norway and Poland, and in the Top Ten in Canada, Denmark, Portugal, Sweden and Venezuela. Subsequent releases, “My Apocalypse”, “Cyanide”, and “All Nightmare Long”, were each Top Ten hits in numbers of European nations.

In 2016 Metallica released their studio album Hardwired to Self-Destruct. The album and the title track both earned Grammy nominations. Since 1989, Metallica has received 23 Grammy Award nominations, winning nine awards.

Metallica performed in Vancouver in concert at the BC Place Stadium on August 14, 2017.

References:
Rob Laing, “James Hetfield: “When I pick up the guitar I want to be the drummer” Musicradar.com, December 20, 2021.
Kory Grow,”Metallica’s Kirk Hammett on Finally Going Solo: ‘I Was Shocked That I Got the Band’s Blessing’,” Rolling Stone, April 22, 2022.
Kory Grow, “Why Metallica’s Lars Ulrich Is Obsessed with Rage Against the Machine Right Now,” Rolling Stone, March 2020.
Greg Pratto, “Jason Newsted (ex-Metallica),” songfacts.com, December 19, 2013.
“Now I Lay Me Down To Sleep,” Wikipedia.org.
“Metallica – Concerts, Canada,” Setlist.fm.