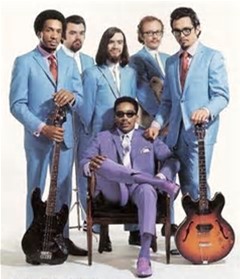 #1142: Fading Away by Bobby Taylor & The Vancouvers

Born in 1934, Robert Edward Taylor was born and grew up in Washington D.C. From the age of three he began to sing. Taylor told the South China Morning Post in a 2011 interview that he could sing Gregorian chant and still knew it by heart in 2011. His mother was friends with Billie Holiday. The musical connection led the young Bobby Taylor to meet Nat King Cole, Ella Fitzgerald, Nina Simone and Miles Davis, among others, while he was a boy. He graduated from high school at the age of 14. The Ku Klux Klan had weekly meetings on the steps of the Capitol buildings in D.C. This frightened young Bobby Taylor and he enlisted to join the U.S. Army in the Korean War where he thought he’d be safer. Taylor was signed up to be a cook in the Korean War. However, he was assigned to an all-black unit that fought in the war. His commanding officer had told Bobby Taylor, “They’re not going to be able to see you.” At the age of 17 Taylor was discharged by the end of 1951. He relocated to New York City in the early 50s and sang in street corner doo-wop groups. Among the singers he sang with included future members of  Frankie Lymon & the Teenagers and Little Anthony and the Imperials.

In 1958 he began his music career as a member of The Four Pharaohs, who released a few minor hits that made the charts in Columbus, Ohio. Taylor moved to Vancouver, Canada, and met vocalist Tommy “Little Daddy” Melton and guitarist Tommy Chong. Together with bassist Wes Henderson, pianist Bernie Sneed, drummer Floyd Sneed (later the drummer for Three Dog Night) they formed Little Daddy And The Bachelors in 1963.

In 1964, Little Daddy & The Bachelors were voted Best Band at Vancouver’s Pacific National Exhibition. From that publicity they went on to record one single for RCA called “Too Much Monkey Business” that was a remake of an old Chuck Berry tune. The song cracked the local Top 30 in Vancouver. Little Daddy was a formative R&B group in Vancouver playing at the Smilin’ Buddha and the New Delhi, often to crowds that included strippers with tassels on their nipples, drag queens and heroin addicts. The group changed its name to Four Niggers And A Chink due to the bands’ ethnic mix. Not surprisingly, their new name turned off many promoters. With a lack of bookings they were briefly named The Calgary Shades, Four Coloured Fellows And An Oriental Lad and finally Four N’s And A C., before splitting up. They eventually reformed with an altered line-up as Bobby Taylor & The Vancouvers.

One evening, Bobby Taylor & The Vancouvers had Mary Wilson and Florence Ballard, of The Supremes, in the audience. Wilson and Ballard passed on word to Berry Gordy Jr. at Motown and the record company flew the Vancouvers to Detroit to make a record. The band’s line-up was made up of Bobby Taylor on vocals, Wes Henderson on bass, Tommy Chong and Eddie Patterson on guitar, organist Robbie King, and drummer Duris Maxwell (aka Ted Lewis).

In 1968 Bobby Taylor & The Vancouvers released their self-titled debut album, together with the single “Does Your Mama Know About Me”, composed by Tommy Chong. The song concerned the anxiety of a boyfriend trying to date a girl of different ethnic background, and the anticipated negative judgements of parents and friends. The single peaked at #29 on the Billboard Hot 100. While it peaked at #8 in Vancouver, the chart run here was not quite substantial enough to make this Countdown. However, the B-side, “Fading Away”, was a hit only in Vancouver and did not chart on the Billboard Hot 100. “Fading Away” was co-written by William “Smokey” Robinson Jr., Warren Moore and Robert “Bobby” Rogers. Each of these songwriters wrote or co-wrote many songs for Motown. Among Warren Moore’s most successful tunes are “I’ll Be Doggone” and “Ain’t That Peculiar” for Marvin Gaye (both with Smokey Robinson), “It’s Growing” and “Since I Lost My Baby” (with Smokey Robinson) for The Temptations and “My Girl Has Gone” and “Ooh, Baby Baby” for The Miracles. “Bobby” Rogers co-wrote The Temptations hit “The Way You Do The Things You Do” (with Smokey Robinson) and “Going To A Go-Go” for The Miracles.

Smokey Robinson wrote many songs for his Motown group, The Miracles, including: “You’ve Really Got A Hold On Me”, “I Second That Emotion”, “Tears Of A Clown”, “The Love I Saw In You Was Just A Mirage”and “More Love”. He also penned many songs for other recording artists at Motown: “My Girl” for the Temptations; “My Guy”, “You Beat Me To The Punch” and “The One Who Really Loves You” for Mary Wells, and hit own hit singles as a solo artist: “Cruisin'” and “Being With You”.

“Fading Away” was originally recorded in February 1966 as the B-side to The Temptations hit single, “Get Ready”. And The Temptations enjoyed regional success with “Fading Away” in Milwaukee, Wisconsin, that year. The lyrics discuss what the song title previews, the dwindling, waning affection one person has for the other in a relationship coming apart. While the singer asks the question, “Where is your love going?,” it seems the answer is that their love has walked out the door.

Bobby Taylor & The Vancouver recorded two more singles. The first, “I Am Your Man”, barely cracked the Billboard Hot 100. Their third release, written and produced by Smokey Robinson was called “Malinda“. It peaked at #17 in Vancouver and #48 on the Billboard Hot 100. Bobby Taylor & The Vancouvers were touring as the opener for Motown artist Chris Clark. However, Tommy Chong and Wes Henderson were fired by Clark, and Motown producer Johnny Bristol for missing a gig to apply for Green cards. The group broke up shortly afterwards.

Back in July, 1968, Bobby Taylor & The Vancouvers were in concert at the Regal Theatre in Chicago. The opening act was a group called The Jackson 5. In 1968, the Jackson 5 had a modest hit called “Big Boy” with Steeltown Records which sold 10,000 copies mostly in the Chicago-Gary, Indiana, region. Bobby Taylor quickly put wheels in motion and got the Jackson 5 to Motown where they got a record deal. After the Jackson 5 signed to Motown in March 1969, Taylor became the group’s first producer. He worked on the groups early singles “I Want You Back” and “ABC”, but didn’t receive credit for it. Taylor was replaced Taylor also came across a group called the Delicates, two of whom became members of the Undisputed Truth. While he released over a half a dozen singles into the mid-70s, Taylor didn’t get the satisfaction of a hit record. He also faced a battle with throat cancer which he overcame through alternate medicine. Years later, Bobby Taylor was appearing in the Gastown neighborhood of Vancouver, where I was able to hear him at a club around the year 2000.

After the Vancouvers’ broke up Tommy Chong became half of the pro-pot Cheech and Chong comedy team, he gained far greater fame than as a guitarist.  He had been living in Hong Kong for eight years after living in Beijing. Taylor was continuing to perform at a club in Hong Kong. He told the South China Morning Post in 2011, “I have 12 kids, met three presidents and in general, I wouldn’t change a thing. I won’t retire until God takes me away.” Taylor performed his final concert on February 18, 2017, at Grappa’s Cellar in Hong Kong. Bobby Taylor died on July 23, 2017. He was 83 years old.

For more reviews on this site visit the Countdown.

One response to “Fading Away by Bobby Taylor & The Vancouvers”