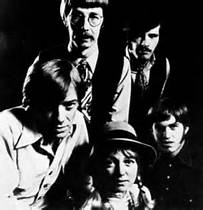 The mid-60s Montreal duo, Cliff Edwards and Anne Ralph, were persuaded to form a group. They added Anne’s sister Jacki Ralph on vocals, drummer Doug Gravelle and keyboard player Gordie McLeod. They named themselves The Five Bells. Shortly afterward Gordie McLeod left the group and Mickey Ottier became the groups drummer. In 1969 they released their first single called “Moody Manitoba Morning“. They continued to play clubs in Canada and landed an 11-week run at the Copacabana in New York. The group shortened their name to The Bells and Anne Ralph left the group, leaving Jackie Ralph as the featured female vocalist and Cliff Edwards the lead male vocalist.

In 1970 pianist Frank Mills joined The Bells and the group released their second single “Fly Little White Dove Fly”. The song was part of a genre of anti-war/peace movement songs finding their way onto AM radio at the time. Other songs at the time included “War” by Edwin Starr, “Lay Down (Candles In The Rain)” by Melanie and “Aquarius/Let The Sun Shine In” by the Fifth Dimension. The Bells offered a gentle nudge for radio listeners to move toward one another in love instead of pulling back from each other due to fear or division.

According to Wikipedia, the Vietnam War began on November 1, 1955, with American support for the new South Vietnamese government after the country had split officially into two nations: North Vietnam and South Vietnam. Under the Eisenhower Administration U.S. military aid and personnel began to offer support to the fledgling South Vietnamese Government as it was feared that non-communist nations in Southeast Asia would begin to fall like dominoes without U.S. military support. The campaign increased incrementally until President John F. Kennedy issued an order in October 1963 to remove all U.S. personnel from Vietnam by the end of 1964. However, JFK was assassinated and President Lyndon Johnson rescinded Kennedy’s order.

In late July into early August 1964 there were several incidents in the Gulf of Tonkin where American military alleged the North Vietnamese had attacked their marine vessels. Squadron Commander James Stockdale was one of the U.S. pilots flying overhead during the second alleged attack. Stockdale wrote in his 1984 book In Love and War: “[I] had the best seat in the house to watch that event, and our destroyers were just shooting at phantom targets—there were no PT boats there… There was nothing there but black water and American fire power.” Stockdale at one point recounts seeing the USS Turner Joy pointing her guns at the USS Maddox. Stockdale said his superiors ordered him to keep quiet about this. In the media hype about what happened a Gulf of Tonkin Resolution was passed in the U.S. Congress authorizing President Johnson to escalate the war, though neither the president or Defense Secretary Robert McNamara were certain there had been any attack.

Reports of the My Lai Massacre involving the deaths of as many as 504 villagers during 1968 was reported in the press in the fall of 1969 bolstering anti-war sentiment. In 1970 the Vietnam War expanded when American President Richard Nixon ordered a bombing campaign and U.S. personnel inside Cambodia. By the fall of 1970, with the expansion of the Vietnam War into Cambodia there were listeners on AM radio that welcomed the message in “Fly Little White Dove, Fly”. “Fly Little White Dove Fly” was composed by Marty Butler and Bob Bilyk. They were two former bandmates from the early to mid-60s Montreal group, The Scepters, that began performing while they were students at Malcolm Campbell High School. Butler and Bilyk grew tired of singing cover versions of other people’s songs. It was then they decided to become a songwriting team. They wrote songs recorded by Tommy Hunter, Ginette Reno and Trini Lopez.

The Bells went on to have a number of hits but none was bigger than “Stay Awhile”, which peaked at #2 in Vancouver, #9 in Australia and #7 on the Billboard Hot 100. At the time they appeared on the Merv Griffin Show. Subsequently, they charted other songs into the Top 20 in Canada, but failed to sustain much success south of the border.

Frank Mills left the group in 1971 and went on to solo success with “Love Me, Love Me Love”, “Music Box Dancer” and other hits. The Bells disbanded in 1973. Jackie Ralph moved west to live in Vancouver. In December 2014 a documentary titled Stay Awhile was shown at the Whistler Film Festival detailing the story of The Bells.

One interesting local connection to The Bells is that Jackie Ralph’s youngest sister, Jennifer Ralph, moved to Vancouver as well. In time she married Christopher Gaze, the Artistic Director & Founder of Bard on the Beach Shakespeare Festival.