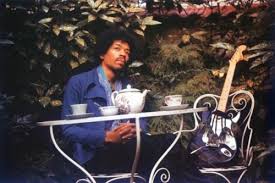 In 1942 Johnny Allen Hendrix was born in Seattle, Washington. His grandparents, Nora and Ross Hendrix immigrated from America to Vancouver in 1911. There they raised Jimi’s father, James Allen Hendrix, who moved to Seattle in 1941 where he met Lucille Jeter, Jimi’s mother. In 1946, Johnny Allen Hendrix’s name was changed to James “Jimmy” Marshall Hendrix. As a child when he was asked to sweep the floor with a broom, his parents and grandparents would find him in his room strumming the broom like he was playing a guitar. He was given a guitar when he was 15 years old. Despite a limited mainstream exposure of four years while billed as Jimi Hendrix, he is widely considered one of the most influential electric guitarists in the history of popular music and one of the most celebrated musicians of the 20th century.

Before the Georgia Viaduct in Vancouver was expanded in 1972, the neighborhood of Hogan’s Alley housed Vancouver’s Afro-Canadian population. At the heart of this community was Vie’s Chicken and Steak House where locals and visitors would stop to get a warm bite of soul food. Nora Hendrix, Jimmy’s grandmother, worked as a cook for many years and lived nearby. Jimmy spent much of his childhood in Vancouver, as his parents often dumped him under the care of relatives. In addition to numerous summer vacations, Jimmy attended school in Vancouver for a brief time. Vie’s hosted a number of visiting black performers such as Nat King Cole, Billie Holiday, Ella Fitzgerald and Louis Armstrong. These artists would eat at Vie’s after concerts once the restaurant had closed to the general public. Jimmy and his cousins would stay up late helping their grandmother serve these famous musicians. James “Jimmy” Marshall Hendrix joined the US Army in 1961, and after being discharged from the Army, he returned to Vancouver during the winter of 1962- 1963 to practice his music. He played in a couple of shows on Granville Street during this time.

In 1963, Hendrix moved to Clarksville, Tennessee, and began to play numerous gigs on the Chitlin’ Circuit. The next year he joined the backing band for The Isley Brothers, and later in ’64-’65 was part of the band for Little Richard. By the end of 1965, Hendrix was fronting his own band called Jimmy James and the Blue Flames. He shed the role of backing guitarist for the spotlight of lead guitar.

Throughout the latter half of 1965, and into the first part of 1966, Jimmy played the rounds of smaller venues throughout Greenwich Village, catching up with Animals’ bassist Chas Chandler during a July performance at Cafe Wha? Chandler was impressed with Jimmy’s performance and returned again in September 1966 to sign Hendrix to an agreement that would have him move to London to form a new band. Switching gears from bass player to manager, Chandler persuaded Hendrix to change his name from Jimmy to Jimi. With drummer Mitch Mitchell and bassist Noel Redding, the newly formed Jimi Hendrix Experience quickly became the talk of London in the fall of 1966.

Chandler arranged for The Animals manager, Michael Jeffrey to co-manage Jimi Hendrix, as Jeffrey could get Hendrix a recording contract. This arrangement also allowed Chandler to focus on producing Hendrix’s recordings. After Hendrix’s rave reviews of his concert at the Monterey Pop Festival in June 1967, Jeffrey booked the Jimi Hendrix Experience for a concert tour with The Monkees. The tour opened in Jacksonville, Florida, on July 8, 1967. Hendrix played at eight of the first 29 scheduled concerts, in the first nine days of the tour. But, during the July 16 concert in Queens, Hendrix walked off stage when crowds of Monkees fans kept singing “Foxy Davy” to the Hendrix tune “Foxy Lady”. That July “The Wind Cries Mary”, written by Hendrix, became his third single. It reached #6 in the UK and #8 in Vancouver. It did not chart nationally in the USA, though it climbed to #1 in Orlando, Florida, and #2 in Sacramento, California. It is considered a classic example of psychedelic blues-rock.

“Purple Haze,” the a-side of “The Wind Cries Mary”, also was given a lot of airplay in Vancouver. But it was not listed on the singles chart in Vancouver. “Purple Haze” peaked at #65 on Billboard and #3 on the UK singles chart. On Labour Day weekend, 1970, “Purple Haze” was listed as #15 in the All Time Top 300 Vancouver Countdown on 1410 CKVN AM radio. CKVN played their Countdown list several times through over that 1970 Labour Day weekend. In 1968, “All Along The Watchtower” was another hit for Hendrix. It reached #5 in England, #6 in Vancouver and #20 on the Billboard Hot 100. In May of 1968 Hendrix’s co-manager, Chas Chandler, withdrew from management involvement to let Michael Jeffrey be Jimi’s sole manager.

Hendrix was supportive of Civil Rights and Peace Movement efforts in the late ‘60’s. In 1969, Hendrix headlined a concert in support of Jerry Rubin, Abbie Hoffman, Tom Hayden, Bobby Seale and the other defendants of the Chicago Seven conspiracy trial. In January 1969, he told Jacoba Atlas for Teenset Magazine, “Get [the] Black Panthers not to kill anybody, but to scare [federal officials]….I know it sounds like war, but that’s what’s gonna have to happen. It has to be a war….You come back to reality and there are some evil folks around and they want you to be passive and weak and peaceful so that they can just overtake you like jelly on bread….You have to fight fire with fire.”

Hendrix was featured a headliner at the 1969 pop festival in Woodstock. Hendrix played “The Star Spangled Banner” during the set and used feedback and sustain to replicate the sound of rockets. The media quickly branded Hendrix’s treatment of the national anthem as a political manifesto against the Vietnam War. Jimi Hendrix was put on file by the FBI in the late 60s. In 1979, college students at the campus newspaper of Santa Barbara University (USB) were able to confirm as much after they filed for release of FBI files on Hendrix. Six heavily inked-out pages from Executive Order 11652 were released to the student reporters, with deletions “in the interest of national defense of foreign policy.” On appeal, seven more pages were reluctantly turned over to the UCSB students. The file revealed that Hendrix had been placed on the federal “Security Index,” a list of “subversives” to be rounded up and placed in detainment camps in the event of a national emergency.

In May 1969, Jimi was arrested at Toronto’s International Airport for possession of drugs. He believed his manager, Michael Jeffrey, had used a third person to plant heroin on him—as a warning, to teach him a lesson.  Jeffrey knew that Hendrix was trying to get out of his contract with him. Furthermore, knowing he didn’t pack any drugs in his luggage, Jimi Hendrix was suspicious that the Toronto arrest was calculated to distract Hendrix from following through with his plan to replace Jeffrey with a new manager. The charges were dropped after Hendrix successfully argued that the unopened container of dope had been dropped into his travel bag upon departure by a female who claimed that it was cold medicine.

According to John McDermott and Eddie Kramer on page 180 of their 1992 biography Hendrix: Setting the Record Straight, Jimi learned from Mike Jeffrey about his prior work for British Intelligence. In Harry Shapiro and Ceasar Glebbeek’s 1990 biography, Jimi Hendrix, Electric Gypsy, Jeffrey boasted “about his undercover work against the Russians, of murder, mayhem and torture in foreign cities.”

Eric Burdon has described how Jeffery burnt down his Club Marimba for the insurance money, then how he absconded with the Animals’ money. In his own memoir, Jimi Hendrix Experience bassist, Noel Redding, described Jeffery’s fondness for guns, throwing knives, electronic bugging devices, and roadie spies. As for his financial skills, to discourage frivolous audits, the ex-spy kept all his business records in Russian.

just after Woodstock, Hendrix was kidnapped at gunpoint, held hostage for several days, then “rescued” in a dramatic shoot-out at his Woodstock compound. Soon he came to suspect that his manager was behind this intimidation too.

Hendrix died in September, 1970. Before he died one of the tracks he recorded was “Freedom”. So what is Hendrix singing about in “Freedom?” He refers to “you,” as the source or force who has his pride, his soul, his heart, who messes with his children and screams at his wife. It could be Hendrix sings “you” in reference to the voice inside his head who guides his actions, sometimes impulsively. The inner chatter in Hendrix’s mind leads to actions such as screaming at his wife or messing things up in his relationships with his children. Hendrix fathered two children out of wedlock, thought neither were granted any claims on his estate by Hendrix’s dad. When Hendrix sings “get off of my back,” he could be trying to get his inner voice to be quiet. Many people practice meditation in order to quiet the chatter in their head and live more mindfully. Did Jimi Hendrix observe many people, including himself, having struggles with their inner thoughts and the damage those thoughts could do to ones ‘self-perception and relationships with others?

“Freedom” was a single from the first album released after his death, The Cry of Love. Hendrix was influenced by Curtis Mayfield and it is suggested that his reference to “keep on pushing, straight ahead,” is an affirmation of the civil rights of African-Americans.

“Freedom” was one of the last songs Hendrix recorded prior to his death. Freedom was something Hendrix had reason to be singing about. He was in a toxic relationship with the manager of his band, The Jimi Hendrix Experience, Michael Jeffrey. In July, 1970, under two months before his death, Hendrix stopped all communications with Michael Jeffrey. Hendrix told Chuck Wein, a film director at Andy Warhol’s Factory: “The next time I go to Seattle will be in a pine box.” Hendrix died on September 18, 1970. The news media reported that he died of a drug overdose. However, beyond the headlines, questions remained about Hendrix’s death.

In 1992 the UK Attorney-General’s office ordered Scotland Yard to reopen the investigation. Page 163 of Hendrix biographer Tony Brown’s 1997 book, Hendrix, The Final Days, he cites the seven month inquiry by Scotland Yard acknowledging the medical examiner in September 1970, “Professor Teare made no attempt to ascertain the exact time of death. The inquest appeared to be conducted merely as a formality and had not been treated by the coroner as a serious investigation.” The lack of thoroughness in the 1970 inquest omitted calling upon the following key persons to give evidence: the ambulance drivers, the police who attended the 911 call, the doctors who attended Hendrix in the hospital room.

Doctor Bannister, the attending Resuscitation Room physician at St Mary Abott’s, came forward in 1992 to tell Scotland Yard he’d witnessed lungs and stomach full of wine in Hendrix like he had never seen in his medical career. Instead of choking on vomit Jimi Hendrix Bannister believed Hendrix had died from being drowned in red wine. He estimated the amount of wine he witnessed in Jimi to be “bottles worth.” This was forensically incompatible with the 5mg/100ml blood alcohol content recorded at the autopsy. In the room where Hendrix was found quantities of red wine were spilled his bed and clothes, as well as soaking a scarf around Jimi’s neck. Bannister estimated that when Hendrix’s body arrived at the hospital for examination there was “a half bottle of wine saturating his hair alone.” Bannister swore under oath that “Jimi Hendrix had been dead for some time…Red wine was coming out of his nose and out of his mouth. It was horrific.” He described how he tried to clear Hendrix’s windpipe with an 18-inch metal sucker but finally gave up due to the inexhaustible volume of liquid. Dr. Bannister concluded, “Someone apparently poured red wine down Jimi’s throat to intentionally cause asphyxiation after first causing barbiturate intoxication. Without the ability to cough he was easily drowned.”

For more regarding the circumstances of Jimi Hendrix’s death see my earlier post.