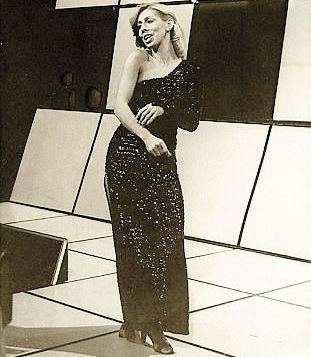 “From New York To L.A.” was co-written by Gilles Vigneault and Gene Williams. Vigneault wrote the Quebec separatist anthems “Mon Pays” and “Gens du pays”. “Mon Pays” was written in 1965 as an ode to the free spirit of Quebec, seen in its winter, its snow, its plains and its gusts of wind. Vigneault writes “My song is not a song, it’s my life.” In 1976 Vigneault set the melody to the chorus of “Mon Pays” as the basis for “From New York To L.A.” Over the years Gilles Vigneault has recorded over thirty studio albums. He is a Grand Officer of the National Order of Quebec. In the province he has one library, two schools and three streets named after him. Vigneault has also received five honorary doctorates.

The lyrics to “From New York To L.A.” concern a singer who has the names New York City and Los Angeles on her lips. She has made it the first priority in her life “just to sing and be free.” She is entranced by the city lights, the booze and drugs, the clubs and the sights and sounds around her. However, after awhile she finds “booze and drugs now break my head, ’cause all the shining stars are dead.” Despite the ups and downs of the fast life of singing on stage and jetting from coast to coast, she declares “in my life there’s no place for the man that I love.” She wonders, given her infatuation with her career if the guy she loves is really meant for her.

In and article titled “5 Women Who Chose Career Over Love Share Why They Did It,” Chelsea Fagen points out that many women put romance on hold for good reasons. A woman named Sarah recalls how she was going steady with an artist who was a great guy, but very lazy. The bloom was off the rose, especially when the couple tried to start a business together. The gal in the relationship realized she was the breadwinner, while he was a dead weight. She found she was better without him. Another woman named Jessie found she was better without her boyfriend who objected to her work schedules. A third woman named Allison got a promotion to move from the USA to London, England. When she announced the news to her boyfriend he became very “negative.” The pair broke up. Allison commented after her move across the Atlantic “I’ve never regretted the decision once. I’m still single but dating, and love my life and job in London.” A 20-something woman named Maya was going out with a guy who she’d been seeing since college. He wanted a slower-paced life. But Maya was working over seventy hours a week at her job, and was entranced with her glamorous life in Manhattan. She broke up with her boyfriend. In the aftermath Maya concedes “I do regret it, when I think about it, because I’ve never met a guy nearly as good for me as him since, and I’ve also cut back on my work hours significantly and changed jobs, for my own sanity. Ultimately he was right… I definitely live a more slow lifestyle than I did before. I don’t know if we would have lived happily ever after, but I’m sad that I will never know.”

In February 1977 the title track from Patsy Gallant’s album, “Are You Ready For Love”, climbed to #17 on the CKLG chart in Vancouver (BC). Her biggest single success was with the disco-infused “Sugar Daddy”, which peaked at #3 in Vancouver (BC) in August 1977. It was her debut release from the album Besoin D’Amour. In 1978 Gallant returned to the Juno Awards to be nominated for Producer of the Year for “Sugar Daddy”, and win Female Vocalist of the Year for three out of four years in a row. She also won the Juno for Best Selling Single with “Sugar Daddy”.

2 responses to “From New York To L.A. by Patsy Gallant”