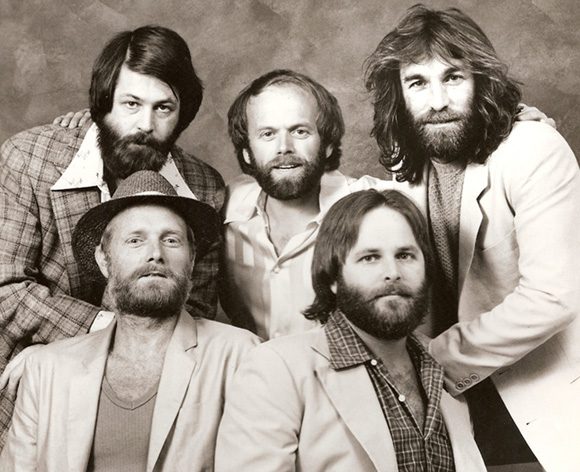 Brian Wilson was born in Inglewood, California, in 1942. In biographer Peter Ames Carlin’s book, Catch a Wave: The Rise, Fall, and Redemption of the Beach Boys’ Brian Wilson, he relates that when Brian Wilson first heard George Gershwin’s “Rhapsody in Blue” it had a huge emotional impact on him. As a youngster, Wilson learned to play a toy accordion and sang in children’s choirs. In his teens he started a group with his cousin, Mike Love and his brother, Carl. Mike was born in Los Angeles in 1941 and Carl was born in 1946 in Hawthorne, California. Brian Wilson named the group Carl and the Passions in order to convince his brother to join. They had a performance in the fall of 1960 at Hawthorne High School, where they attended. Their set included some songs by Dion and the Belmonts. Among the people in the audience was Al Jardine, another classmate. Jardine was born in Hawthorne in 1942. He was so impressed with the performance that he let the group know. Jardine would later be enlisted, along with Dennis Wilson to form the Pendletones in 1961. Dennis was born in Inglewood in 1944.

The first song Brian Wilson wrote would become “Surfer Girl.” A demo of the tune was made in February 1962 and would go on to be a Top Ten hit when it was released a year later in 1963. However, their first recording was a doo-wop-surf tune called “Surfin’” in October 1961. It was released in November ’61 on the Candix Enterprises Inc. label. The surprise for the group was that the record label had changed the group’s name from the Pendletones to the Beach Boys. Consequently, as each time the record was played by a DJ in America, radio listeners were being introduced to the Beach Boys. The name Pendletones was now history.

The Beach Boys were at the top of their popularity into the mid-60’s. They released their hit album, Pet Sounds, in May 1966, with  the hits “God Only Knows,” “Wouldn’t It Be Nice” and “Sloop John B” all doing well on the pop charts, especially in Vancouver. It was their ninth of ten successive albums that made the Top Ten in the Billboard 200 Album charts. 1966 was also the year The Beach Boys had their #1 hit, “Good Vibrations,” which was their third #1 hit in three years. On August 16, 1966, the Beach Boys performed in concert in Vancouver at the Queen Elizabeth Theatre. On February 3, 1968, and the following year on January 18, 1969, the Beach Boys gave concerts in Vancouver at the PNE Agrodome.

From 1967 onward, The Beach Boys chart successes were sporadic. However, they have continued to tour over the decades. “Good Timin'” was co-written by Brian and Carl Wilson. The song is about learning about good timing. Life goes on and the world keeps on turning. Good timing is when a placement or occurrence of something is just right, as in the timing of the sale or purchase of a home, a proposal of marriage, or a pass between players in a sporting match that leads to scoring on one’s opponent.

Since the age of the Ancient Greeks, there has been a concept of good timing. The Ancient Greeks had a word for the concept which they named kairos. Kairos meant the right, critical, or opportune moment. The ancient Greeks had two words for time: chronos and kairos. The former refers to chronological or sequential time, while the latter signifies a proper or opportune time for action. While chronos is quantitative, kairos has a qualitative, permanent nature. Greek philosophers had examples to point to a kairos moment. In archery, kairos denoted the moment in which an arrow could be fired with sufficient force to penetrate a target. In weaving, kairos denoted the moment in which the shuttle could be passed through threads on the loom. Both examples illustrate moments when an exact choice needs to be made.

In life, we can move through our days without being aware of choices that require action. We can miss our mark, shying away from action, deferring decisions, dithering our lives away. But good timing involves the courage to apprehend what the moment calls for in any given situation and having the courage and skill to act decisively. In the field of rhetoric, kairos is “a passing instant when an opening appears which must be driven through with force if success is to be achieved.” The leading debaters in thought about kairos were Plato and Aristotle.

On July 20, 1983, the Beach Boys gave a concert at BC Place Stadium in Vancouver. Tragedy struck when Dennis Wilson, plagued with alcohol and drug addiction, drowned after he came out of rehab in December 1983. He was 39 years old.

The Beach Boys have had four singles – “Good Vibrations,” “California Girls,” “In My Room” and “I Get Around” – and one album, Pet Sounds, inducted into the Grammy Hall of Fame between 1994 and 2017. On August 2, 1993, the Beach Boys appeared in concert in the Vancouver suburb of Burnaby at Deer Lake Park.

In 1997, Carl Wilson was diagnosed with lung and brain cancer. While on tour, and receiving chemotherapy, he sat on a stool while performing the Beach Boys hits. Carl Wilson died at the age of 51 in February 1998.

In 2016 Mike Love published Good Vibrations: My Life As A Beach Boy, while Brian Wilson published his memoir, I Am Brian Wilson. And on November 9, 2016, the Beach Boys performed at the Orpheum in Vancouver.

Between November 30, 2019, and March 7, 2020, The Beach Boys have scheduled 30 concert dates across ten states in the USA. Their most recent concert in Vancouver (BC) was on August 31, 2019. The current lineup includes Mike Love, Bruce Johnston, Christian Love, and John Cowsill (formerly of the Cowsills). Brian Wilson is touring separately with former Beach Boy, Al Jardine, and a backing band.

One response to “Good Timin’ by The Beach Boys”