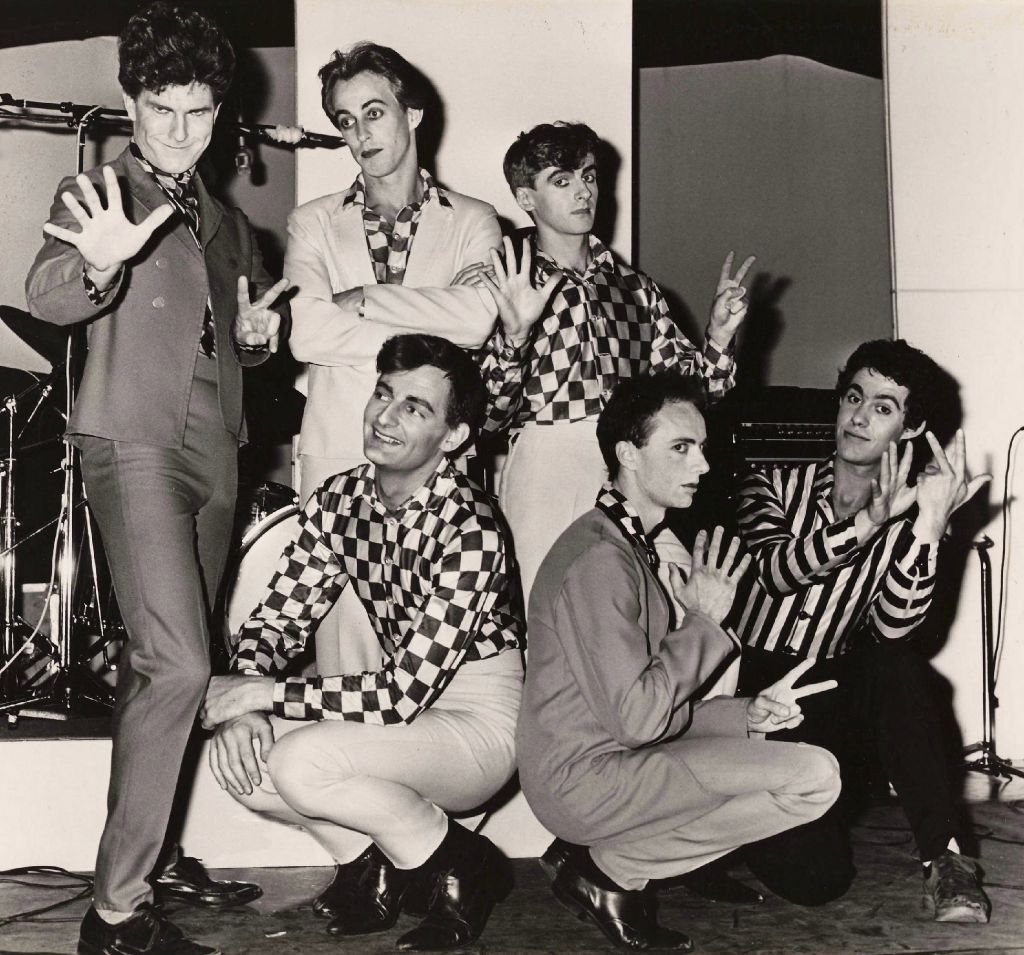 Split Enz is a folk-rock band that formed in 1972. For the first several years they spelled their name The Split Ends. They released their first single in New Zealand and Australia in 1973. The co-founders of the band were Tim Finn and Phil Judd. Finn was the lead vocalist and played acoustic and electric guitar and piano. Phil Judd also played guitar and added vocals. Judd eventually left the band in 1978. In the late 70’s and early 1980’s, Split Enz’ membership consisted of Tim Finn, his younger brother Neil Finn on vocals and guitar, bass player Nigel Griggs, drummer Malcolm Green, keyboard player Eddie Rayner and percussionist Noel Crombie. During the 1970’s, they had two singles in the Top 50 in New Zealand which made the Top 20 in Australia.

Tim Finn was born in Te Awamutu, New Zealand. Phil Judd was born in Hastings, New Zealand. The pair relocated to Melbourne, Australia, in 1975. Judd left the band in 1978 to form a punk band in New Zealand named the Suburban Reptiles. Split Enz became a more mainstream rock band with an In 1980, the band released the chart-topping “I Got You,” which went to #1 in New Zealand and Australia. The single was #1 in Australia for eight weeks. Neil Finn wrote “I Got You”. The song concerns a guy who is dating someone who is all that he wants. He describes his amour as “a pageant” and everything he’s “imagined.” With this steady relationship, he doesn’t go out much. And when he’s on his own he stays in his room. He needs reassurance that things are okay between the two of them. “Where do you go – I get no answer
You’re always out – it gets on my nerves. I don’t know why sometimes I get frightened. You can
see my eyes, you can tell that I’m not lying.”

In 1981, Split Enz released their sixth studio album titled Waiata, a which is the Māori word for song. They released three singles from the album, the first being “One Step Ahead.”

A second single from Waiata, “History Never Repeats,” became a Top Ten hit in New Zealand and Australia. However, it failed to gain international exposure. Their debut single from the album, Time And Tide, in 1982, called “Dirty Creature,” found Split Enz boxed in with Top Ten success in Australia and New Zealand but nowhere else. In 1982, the band released the single “Six Months In A Leaky Boat.” While the song made the Top Ten in Vancouver, Split Enz hoped for international hit failed to materialize when the BBC blacklisted the song during the Falklands War. The BBC acknowledged this eventually in 1999, as reported in The Q Encyclopedia of Rock Stars by Dafydd Rees and Luke Crampton.

In 1983 and ’84, Split Enz released their final studio albums, Conflicting Emotions and See Ya ‘Round. Both albums garnered singles that made the Top 20 on their continent. After the album, Split Enz split up. Neil Finn and recent Split Enz drummer, Paul Hester, went on to found Crowded House, who had international hits in the later half of the decade, including “Better Be Home Soon.” Crowded House was active as a band until 1996. And since 2006, Neil Finn has headed a reformed Crowded House that continues to tour. Paul Hester, who had suffered from depression for years, died by suicide at the age of 46 in 2005.

Tim Finn has mostly pursued a solo career after leaving Crowded House in the late ’80’s. In 1989, Finn won two New Zealand music awards for his solo performance of “Parihaka.” His song to the 2005 soundtrack of The Chronicles of Narnia: The Lion, the Witch and the Wardrobe, entitled “Winter Light.” Imaginary Kingdom won Tim Finn a New Zealand music award for Best Male Solo Artist in 2007. The song was one of the tracks on Finn’s Imaginary Kingdom album in 2006. In late 2015, Tim Finn wrote the music and lyrics for the musical, Ladies In Black, premiered in Brisbane. He collaborated with Carolyn Burns on the production. The musical was based on the 1993 novel, The Women in Black, by Madeleine St John. The musical won a Helpmann Award in Australia in 2016 for Best New Australian Work.

Nigel Griggs released a solo album in 2002 titled Sleeper. He has appeared at most of the Split Enz reunion tours over the decades. Malcolm Green left Split Enz in 1981 after disagreements regarding Green’s songwriting and inclusion of his songs on the band’s albums. He moved to Australia and helped produce and mentor other recording artists in his own studio. Green took part in Split Enz 2005 tour. Eddie Rayner ended up as music director for a TV show called New Zealand Idol. He has also been part of Spit Enz reunion tours, as well as touring with another band named Space Waltz. Noel Crombie released a solo single in 1983. He also helped with the stage set design for the final concert in Sydney, Australia, for the Crowded House Final World Tour.