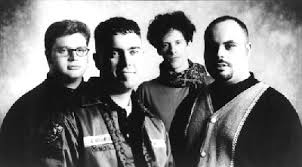 Lloyd Edward Elwyn “Ed” Robertson was born in Scarborough, Ontario, in 1970. He began to play guitar when he was in grade five. Steven Jay Page was also born in Scarborough in 1970. He took piano lessons for ten years and was a member of the Toronto Mendelssohn Youth Choir. Page and Robertson crossed paths in elementary school. But they didn’t become friends until 1988 when they found themselves co-counsellors at a summer Scarborough Schools Music Camp. Later that year there was a charity and Robertson asked Page to join him in a performance. The duo named themselves the Barenaked Ladies.

In 1990 Andrew Burnett “Andy” Creeggan and brother James Raymond Creeggan joined the Barenaked Ladies. Both brothers were born in Scarborough, Jim in 1970 and Andy in 1972. Jim learned piano from his mother and played double bass from grade school. Tyler Joseph Stewart was born in 1967 in Toronto. In 1990 he met Steven Page, Ed Robertson and Jim Creeggan at the Waterloo Busker Carnival.  They asked Stewart to join the band while Andy Creeggan was on a trip in South America. Andy had been playing congas in the band and wound up moving to keyboard when he returned.

On New Year’s Eve in 1991 the band was banned from performing at Nathan Philips Square at Toronto’s city hall. Mayor June Rowlands declared that the band’s name, was politically incorrect. In 1992 the band got a record contract and released their debut album, Gordon. The album fostered the release of six singles that all appeared on the Canadian RPM singles chart over 1992-93. These were “Be My Yoko Ono”, “Enid”, “If I Had A $1000000”, “What A Good Boy”, “Brian Wilson” and “Grade 9”.

“Grade 9” is a song depicting the trials of a guy coping with a year in school during adolescence. The Barenaked Ladies video has a grade 9 male student variously being put in his own school locker and having a battery of soccer balls thrown at him. At the school cafeteria someone steals his sandwich and another student whacks him on the head and his glasses fly onto the floor and break. He hides in a recycling bin in a school hallway, plays at school band practice. One student throws a muffin at him, while other students throw little balls of rolled up paper. He gets called a bunch of names including chicken legs, four-eyes, fatso, buckwheat and Eddie. On another occasion someone pulls the chair out from behind him where he is about to sit down. Who said high school was fun.

The band followed up with the albums Maybe You Should Drive (1994) and Born On A Pirate Ship (1996). The former album included the singles “Jane” and “Alternative Girlfriend”. The latter featured “Shoe Box” and “The Old Apartment”, which marked their first appearance on the Billboard Hot 100. In 1996 Andy Creeggan left the band and was replaced by Kevin Hearn. The band went on to their greatest success with the release in 1998 of their album Stunt. The album included “One Week”, a song that peaked at #1 on the Billboard Hot 100 on October 17, 1998. Followup singles from the album, “It’s All Been Done” and “Call And Answer” both made the Top Ten on the Canadian RPM singles chart. The Barenaked Ladies “Brian Wilson” enjoyed a resurgence in some radio markets in the USA in 1998. In both Chicago and Bethesda, Maryland, it was listed in the Top 100 year-end songs on alternate music radio stations, including #26 for the year on WKQX in Chicago.

Their last significant success came in 2000 with the release of their album Maroon and the single “Pinch Me”. In September 2000 the Barenaked Ladies were given a key to the city of Toronto and welcomed back to play at city hall. By 2004 the band returned to recording their albums independently. Among the albums that followed, their 2008 release, Snacktime, was a children’s album.

In 2008 Steven page was arrested for possession of cocaine and in 2009 he left the band. In 2010 Page released a debut album titled Page One. On August 27, 2011, Steven Page performed the Leonard cohen song “Hallelujah” at the state funeral service for Jack Layton.

Since the departure of Steven Page, the Barenaked Ladies have released four more studio albums, for a total of sixteen to date. One of these is a collaborative album in 2015 with the Brooklyn based a cappella group the Persuasions.