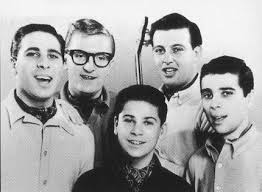 #999: Greatest Moments In A Girls Life by The Tokens

In 1955 a doo-wop group called The Linc-Tones formed in Brooklyn, New York. Neil Sedaka was a founding member of the group but left in 1957. They renamed themselves in 1957 as The Tokens. That year they appeared on TV for the first time on The Ted Steele Dance Time. In 1959 the Tokens recorded “Picture In My Wallet” under the name of Darrell & The Oxfords, which became a Top Ten hit in San Bernardino. The Tokens are known best for their number one 1961 hit, “The Lion Sleeps Tonight.” The song was originally a Zulu folk song called “M’bube” and Anglicized to “Wimoweh”. The Tokens consisted of Jay Siegel, Hank Medress and brothers Mitch and Phil Margo. True rock pioneers, they were among the first to successfully use the falsetto lead voice, a sound that influenced groups such as the Four Seasons and the Beach Boys. The group had their first Top 20 hit in the USA billed as The Tokens with “Tonight I Fell In Love”, in 1961. The song peaked at #27 in Vancouver.

From 1962 to 1970, the group released nine more songs that charted in the Billboard Hot 100. Jay Siegel was the lead vocalist on all the Tokens’ hits. Beginning in 1963, the Tokens also began serving as record producers for other artists, such as The Chiffons, Randy & The Rainbows, The Happenings, and Tony Orlando. Their company was called Bright Tunes Productions and they also had a record company named B. T. Puppy Records.

In 1966 The Tokens were still looking for a Top 30 hit, as they hadn’t charted one since “The Lion Sleeps Tonight” in 1961. Mitch Margo’s “I Hear Trumpets Blow” climbed to #30 on the Billboard Hot 100 in the spring of 1966. The tune stalled at #12 on CFUN in Vancouver for three consecutive weeks. In America “I Hear Trumpets Blow” was the nineteenth single the group had released since their number one hit five years earlier. Of these, fourteen missed the Billboard Hot 100. Hopeful they were back on the radar, The Tokens next issued a single in 1966 called the “Greatest Moments in a Girls’ Life”. The proposal, his proposal:
be mine for all time.
The wedding, the gold band,
Do you? I do.
Toast is to the bride and groom,
happy day, ride away on their honeymoon.

“Greatest Moments in a Girl’s Life” is a song is full of anticipation for a girl new at dating. On her first date she hits a home run. The date goes very well, the guy is a great kisser and in every way he’s the kind of guy she’s always dreamed about. After a year he offers a marriage proposal and in time they get married. The anticipation of the wedding night when they are on their honeymoon infers they’re going to try to make a baby. In some instances it is the case that two people meet and on their first date the stars all align and they feel solid as a rock about each other. But, in many cases people don’t feel that the earth moved when they met someone on a date. While “Greatest Moments In A Girl’s Life” failed to chart in the USA, it peaked at #6 in Vancouver. In the U.S.A. the song did best in Duluth, MN, at #6,  Springfield, MA, at #9 and Atlanta at #11.

The Tokens enjoyed success recording commercial jingles in the 1970s and 1980s for such products as Benson and Hedges cigarettes, Pan American Airlines and Clairol hair products. Over the years, The Tokens have shared the stage with other recording acts including The Beatles, Chuck Berry, and Little Richard.

Hank Medress left the Tokens in 1973. After that he co-produced many of Tony Orlando and Dawn’s hits as well as Melissa Manchester’s albums. Later, he worked with David Johansen, Rick Springfield, Dan Hill, and Richard Simmons. He was president of EMI Music Publishing Canada, from 1990 to 1992. Medress died of lung cancer in 2007.

In 1972 Jay Siegel did background vocals for a re-recording of “The Lion Sleeps Tonight” with Robert John as the lead vocalist. The cover version became at Top Ten hit across North America. Siegel, Mitch and Phil Margo have continued to tour as The Tokens with different additional members over the years. At times Siegel has had his own touring group called, The Tokens, while the Margo brothers have also and a Tokens group on tour. In 2003, Siegel received an honorary doctorate from Kean University.

While continuing to tour with The Tokens, Phil Margo managed Robert Guillaume while he starred on the TV series Soap and Benson. Phil has written and produced several television movies, hour dramas and half-hour sitcoms. He has invented the Spare Pocket, an adjustable waist –side, carrying device, on which he holds a patent. He has also published a science-fiction novel titled The Null Quotient.

Mitch Margo, was the lead vocalist for the Tokens into 2017 performing “Tonight I Fell In Love” and “The Lion Sleeps Tonight”. Margo died on December 1, 2017. He was 70.

In 1998 The Tokens became the first and only group to sing the American National Anthem in all major league ballparks in one season. This accomplishment landed them into the Guinness Book of World Records. On July 6th of 2005, The Tokens were inducted into the Vocal Group Hall of Fame.

As of February 2018, The Tokens have two concerts coming up in 2018 on their website.