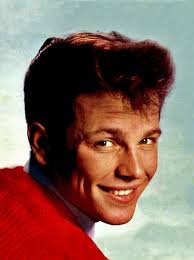 Bobby Curtola was born in Port Arthur, Ontario, in 1943. (The town would become amalgamated into the city of Thunder Bay in 1970). In the fall of 1959, sixteen-year-old high school student Bobby Curtola went from pumping gas at his father’s garage in Thunder Bay, Ontario, to the life of a teen idol. Within a year he went from playing in his basement band, Bobby and the Bobcats, to recording his first hit single in 1960, “Hand In Hand With You”, which charted in Ontario, but not in Vancouver. After performing on the Bob Hope Show in 1960, the charismatic teenager, with his handsome boy-next-door looks was quickly finding himself within a whirlwind called “Curtolamania.”

Bobby set out on his first Western Canadian Tour in the fall of 1960. From there Curtola went on to become a trailblazer. He toured the first coast to coast tour circuit in Canada. In 1961 he went to Nashville to record with Bill Porter for RCA Studios. That relationship continued for decades. “Don’t You Sweetheart Me” was his first Top Ten hit in Canada. The song climbed to #1 in Winnipeg, #4 in Vancouver and #5 in Toronto.

Between 1960 and 1968 Curtola had continual single and album releases on the Tartan label in Canada. The managers and main songwriters were brothers Dyer and Basil Hurdon. The Del-Fi label released some of those singles in the US. His biggest hit, “Fortune Teller,” was released in 1962 and went Gold in Canada. The Rock n’ Roll Hall of Fame DJ, Red Robinson, was key in the success of “Fortune Teller”. Seeing its potential internationally, Robinson sent the single to Disc Jockey’s in Seattle at KJR and Hawaii’s KPOI in Honolulu. A major US record deal was signed and “Fortune Teller” went on to sell two and a half million copies. Bobby Curtola was invited to tour with Dick Clark and his Cavalcade of Stars. The B-side to “Fortune Teller”, titled “Johnny Take Your Time”, had a separate chart run beginning with the final chart week for “Fortune Teller”. 1962 was a very big year for Bobby Curtola as he charted three songs into the Top Ten in Vancouver.

While on tour in England, Bobby Curtola met The Beatles and appeared on June 15 1963, on the famous British TV variety show Thank Your Lucky Stars. Other performers on that telecast were John Leyton, Jackie Trent, Kenny Ball and The Bachelors.

The hits kept coming in 1963 when he charted five more singles into the Top Ten on CFUN in Vancouver. The second Top Ten hit in a row in Vancouver for Curtola was “Gypsy Heart”. Beware the guy with the gypsy heart,
he’ll make you believe that it’s love from the start.
Give him a break and he’ll break your heart,
and leave you alone to cry.

Beware the guy with the gypsy heart,
he’ll make your dream and he’ll rip it apart.
He’ll take your kisses and say goodbye,
and leave you alone to cry.

Look for a guy a little bit shy,
and not too fast with a kiss.
A guy who’ll be true forever to you,
don’t you want a love like this?

I’m not a guy with a gypsy heart,
I want to stay by your side from the start.
Give me your love and I cross my heart,
you won’t be alone to cry.

Look for a guy a little bit shy,
and not too fast with a kiss.
A guy who’ll be true forever to you,
don’t you want a love like this?

“Gypsy Heart” plays on the association with gypsies and a nomadic life. A gypsy heart, the lyrics tell us, would also be nomadic and roaming away from anyone who hopes they’ll stay true and settle down. The guy with the gypsy heart is someone to beware of, according to the song. He’ll only leave you alone to cry after taking your kisses, offering a dream and ripping it apart. The promise, instead, of someone with a true heart, “a guy who is shy and not too fast with a kiss,” who “stays by your side from the start” appealed to many teen listeners who aspired to a better fate than the gal who is left alone to cry by the guy with a gypsy heart. While “Gypsy Heart” failed to make the Canadian national RPM charts it peaked at #7 on CFUN. It climbed to #11 in Grande Prairie, Alberta, and #20 in Peterborough, Ontario.

Before Bobby Curtola sang about his “Gypsy Heart,” there were numbers of songs with references to gypsies. One can infer that his biggest hit, “Fortune Teller”, concerned a gypsy who looked into a crystal ball to predict a future romantic partner. In 1959, “Love Potion Number 9” by The Clovers was about a “gypsy with a gold-capped tooth” who gave them a love potion. In 1962, Lou Christie sang “The Gypsy Cried” about a gypsy who discovers then they look into a crystal ball that the girlfriend the guy is dating doesn’t really love him. George and Ira Gershwin wrote “Embraceable You,” recorded by Frank Sinatra, Fred Astaire, Billie Holiday and others. The song was about a fellow whose love-life is spare and passionless until he meets someone who brings “out the gypsy in me.” In 1946 the Ink Spots sang about “The Gypsy,” choosing to believe when she read his palm that his lover was faithful, even though he knew his lover was kissing someone else. And that same year Peggy Lee sang about a love story that gypsies tell “that when your love wears golden earrings” they belong to you. In 1961 The Impressions sang about a “Gypsy Woman” whose eyes hypnotized men as she danced around the gypsy caravan. At the same time Bobby Curtola was singing about a “Gypsy Heart”, Rick Nelson had a song on the CFUN charts in the the spring of 1963 titled “Gypsy Woman.” In Nelson’s case he needed a gypsy woman to look into her crystal ball to find his “baby” who had gone and left him alone and blue.

The term Gypsy traces back to the mistaken belief that the Romani people were from Egypt. The ethnic group in question are thought to have roots in both India and eastern Europe. As the Romani were often discriminated against, they had to live a semi-nomadic existence. Often they were being uprooted when local residents scapegoated them for some real or imagined trespass. Gypsies carried shells, coins and stones imbued with incantations and ritual powers. These amulets and talisman were carried in the pockets of gypsies for power and protection. Within the Gypsy culture there is a value on cultivating clairvoyance, psychic powers and intuitive guidance. This includes noticing a person when they come to get their fortune read, palm read or have a gypsy look into a crystal ball. When gypsy caravans came to a European town, there often was at least one gypsy fortune-teller with a booth where they wore bangles, silks, a turban, lit candles, read tarot cards, read palms and looked into a crystal ball, often in a trance. In popular songs, gypsies are often exotic and helpful as they predict the future or possess love powers that hypnotize. However, in world history gypsies have often been on the margins of society as one of the first groups scapegoated when societies look for someone to blame for an economic downturn, weather event or new pestilence.

Bobby Curtola continued to have hit singles that climbed into the Top 20 in 1964 and 1965. These included “Little Girl Blue” and “Donna”, his cover of a Ritchie Valens song from 1958. But in the face of the British Invasion, Curtola was becoming passé.

In June of 1964, Bobby Curtola got to sing what would become an ear-worm for radio listeners across all radio and TV stations in the mid-sixties. He became the first pop singer to record a jingle that sounded like a Top 40 Hit Single. The jingle was “Things Go Better with Coke.” He signed an exclusive contract with Coca-Cola to be their #1 Spokesman. Bobby, also co-wrote “The Real Thing” which was used for the commercial “Coke’s The Real Thing.” After turning twenty-one, Bobby was interviewed by John Pozer on his TV show in Ottawa, Saturday Date, which ended with the pair toasting to his success with coke bottles. In the interview Curtola reveals that the jingle was made in Nashville and that Elvis’ former backup group, The Jordanaires, backed Curtola in recording the commercial. Bobby Curtola went on in 1965 to host The After Four Show in Toronto. In 1966 he won a RPM Gold Leaf Award for becoming the first Canadian to have an album go gold. In 1973 Curtola became the CTV host of Shake, Rock and Roll. For many years he also hosted the Miss Canada and Teen Canada beauty pageants. And from 1972 into the mid-90’s Bobby Curtola had a career performing in Las Vegas, often as the opening act of Bob Hope. Over the years Bobby Curtola toured Asia, Europe, South America and across North America.

Besides his musical work, Curtola was also a business entrepreneur, marketing a successful brand of Caesar Cocktail. In 1996, Toronto City Council made April 26 Bobby Curtola Day. Curtola was been given the keys to the city of Edmonton, Brandon, Calgary, and Hamilton. In 1997 Bobby Curtola flew to Las Vegas to become an inductee of the Coca Cola Hall of Fame.

In 1998 Bobby received the Order of Canada for his humanitarian work. In 2011 he received a star on Toronto’s Italian Walk of Fame. Bobby Curtola died in 2016 at the age of 73.