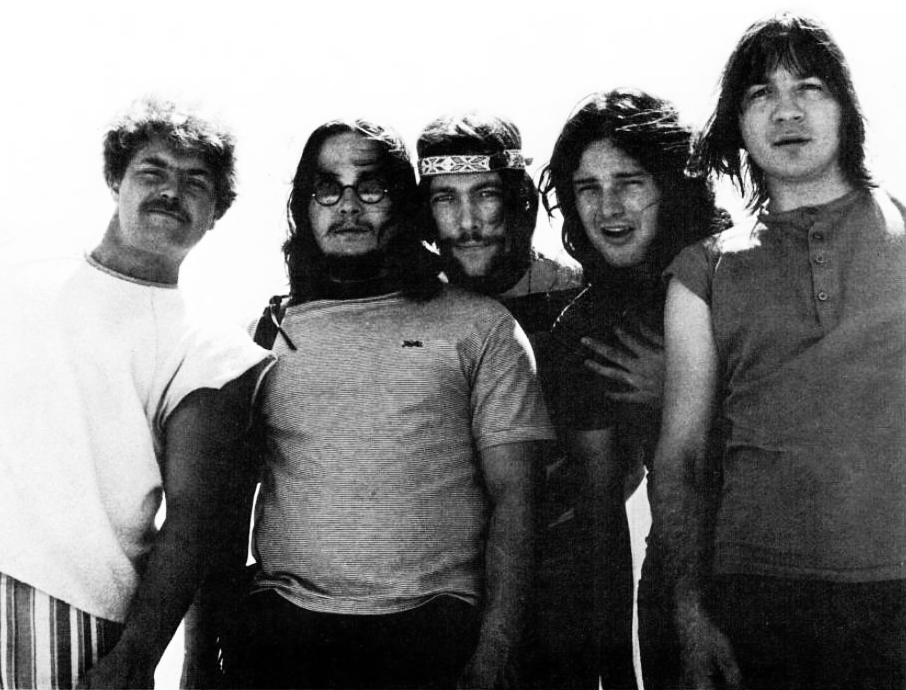 In the fall of 1967 The Guess Who? were hired as the house band for The Swingers, a local CBC radio show in Winnipeg. They also were hired as the house band for the TV show Let’s Go, also on the Canadian Broadcasting Corporation. That show was hosted by their former band-mate, Chad Allan. The group got exposure on the 39 weeks the show aired in both seasons (1967-68 and 1968-69). They performed hits on the Canadian charts like “Touch Me” by The Doors, “Time of the Season” by The Zombies, “You Keep Me Hanging On” by Vanilla Fudge, “White Room” by Cream and “Along Comes Mary” by The Association. They also were able to debut some of their own compositions including “These Eyes”, “No Time” and one of their early minor hits, “This Time Long Ago”.

Believing in The Guess Who?, Richardson went into debt to help them record their first studio album in September 1968 called Wheatfield Soul. It was released in March 1969 along with the debut single from the album, “These Eyes”. By 1969 the band dropped the question mark in their billing to be known as The Guess Who. In 1969 the band played before one of the biggest crowds at the Seattle Pop Festival. Other headliners on stage at that event were Led Zeppelin, The Doors, The Byrds, The Burrito Brothers, Frank Zappa and The Mothers, Alice Cooper, Bo Didley, Chuck Berry, Ike and Tina Turner and The Chicago Transit Authority.

In 1971 the Guess Who released a double-sided single with “Hang On To Your Life”/”Do You Miss Me Darlin'”. “Hang on to Your Life” and “Do You Miss Me Darlin’” was a double-sided hit in Canada that reached #8 in Vancouver, # 5 in Canada. Only the A-side only charting to #43 on the Billboard charts. In the USA the song did best in Chicago (#4), Salt Lake City, Columbus and Louisville at #6 and St. Louis at #7. In “Hang On to Your Life” the singer muses about people who have died, about not wanting to die and betraying a friend. The song ends with the verses 13 to 15 of Psalm 22, about being brought to “the dust of death.” In the New Testament it is told that Jesus quoted the first part of verse 1 of Psalm 22. The purpose of the use of that quote in the New Testament was to foreshadow the crucifixion of Jesus of Nazareth. Jewish scholars would differ on the original intention from the writer of Psalm 22 as having anything to do with the death of Jesus. However, Burton Cummings and Kurt Winter of the Guess who would have known of the Christian adaptation of Psalm 22 and it’s foreshadowing Jesus’ death. Consequently, the songs lyric took on a cosmic tone that may have played well to those who were involved with the Jesus Movement.

The Jesus Movement was a Christian phenomenon within the hippie/counter-culture movement in the late 1960’s and early 1970’s. Other songs on pop radio stations that evoked Christian references included the “Wedding Song (There is Love)” by Paul Stookey (1971); “Crystal Blue Persuasion” and “Sweet Cherry Wine” both by Tommy James and the Shondells; (1969), Your Own Back Yard by Dion (1970); “Jesus is a Soul Man” by Lawrence Reynolds (1969); “Rock Me On the Water” by Jackson Browne (1972); and numbers of tracks off albums in the 1970’s by Bruce Cockburn such as You Don’t Have to Play the Horses (1973) and Lord of the Starfields (1976). The next single release in 1971 by the band was the non-album disc “Albert Flasher”/”Broken”.

The followup single, “Rain Dance” became the twelfth Top Ten single for The Guess Who in Canada. The B-side, “Sour Suite” was also a Top 20 hit in Canada. In the fall of 1971 The Guess Who released “Life In The Bloodstream”, which peaked at #4 in Vancouver. All three songs were from the Guess Who’s eighth studio album So Long Bannatyne. While the Guess Who gave a concert at the PNE Agrodome on October 15, 1971.

In 1972 the band had more Top Ten hits in Canada with “Heartbroken Bopper” and “Running Back To Saskatoon”. The Guess Who went on tour with Three Dog Night in November and December 1972 to Japan, New Zealand, and Australia. The following year “Follow Your Daughter Home” and “Glamour Boy” kept the band on Top 40 radio.

In 1974 The Guess Who pulled out of their slump with a Top Ten hit across the continent, “Clap For The Wolfman”, a tribute to the famed rock ‘n roll DJ. However, after their album, Road Food, the band went back into a slump with fans taking a pass on further album releases into 1975-76. On August 26, 1974, and again on August 16, 1975, the Guess Who performed concerts at the Pacific Coliseum in Vancouver. The Guess Who officially split up in October 1975. Burton Cummings went solo.

As of October 2017, The Guess Who have thirteen upcoming concerts scheduled between April and November 2018. The current lineup includes original band member of The Guess Who, Gary Peterson.