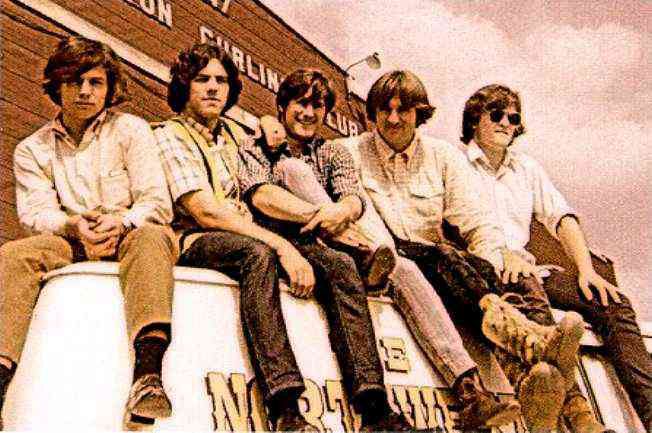 The Northwest Company was a band in the Fraser Valley from the town of Haney, about 25 miles east of Vancouver. The bands members were bass player Gowan Jurgensen, lead vocalist Rick McCartie, lead guitar and vocalist Ray O’Toole, rhythm guitar player Vidor Skofteby and on drums and vocals, Richard Stepp, who was a teenager in Sicamous, British Columbia. Before moving to Vancouver in his late teens, Richard Stepp had been a paid musician in two Sicamous area bands called the Esquires and the Rebels. McCartie had been lead vocalist, and Richard Stepp the drummer, with the short-lived Vancouver band, The Questions, in 1965-66 (a group that won the Battle of the Bands in 1965 at the Pacific National Exhibition). The Northwest Company was originally named the Bad Boys. This was named after The Bad Boys Rag Shop, a trendy clothing store in Vancouver back in ’67. However, CFUN deejay Tom Peacock, encouraged the band to come up with another name that wouldn’t strike fear into parents of the groups female fan-base. It was Gowan Jurgensen who suggested to his bandmates the North West Company, based on the Montreal fur trading business founded in 1789. The band agreed, but distinguished themselves from the fur trading company with “Northwest” instead of “North West.”

Despite naming themselves after an establishment fur-trading company, the Northwest Company was a garage punk band. They played loud, driving, music that resembled The Kinks “You Really Got Me”. The rowdy and raucous performances of The Northwest Company gave them a “bad boy” sound despite the groups name change. On stage, The Northwest Company performed synchronized dance steps. To add a chaotic edge to this, the husky Rick McCartie would put Ray O’Toole on his shoulders while the song was being played, making the audience cheer when they successfully did the synchronized dance steps.

In July 1967 The Northwest Company recorded five tracks at the Telesound Studios in Vancouver. Of these, a song called “Hard to Cry” was released as a single, written by Vidar Skofteby. “Hard To Cry” was a rhythm guitar players dream with lots of reverb. The song was released on C-FUN deejay Tom Peacock’s new Grenadier Record label. The amateur recording had a “recorded-in-a-cave” sound, adding to its rebellious vibe. Though the song didn’t make the Top 40 in Vancouver, C-FUN play listed it for ten weeks over the summer of 1967 on their ALL-CANADIAN TOP TEN. The tune spent five week of its ten weeks on this chart at #3.

In the song the singer comments “I don’t know why, it’s hard to cry.” In a news.com story about the British Prince Harry, it was reported “PRINCE Harry was talking about his mum recently in a documentary that aired on Channel 7, when he made a startling admission. He had only shed tears about his mother’s death twice in the twenty years since her passing. “The first time I cried was at the funeral and only since then maybe once. People deal with grief in different ways, and my way of dealing with it was by just basically shutting it out, locking it out,” Harry said.

Do men cry less than women? The News.com article asked Dutch Professor Ad Vingerhoets about a study he’d conducted about the incidence of tears shed in a calendar year. He found that “women cry between 30 and 64 times a year, and men only cry between six and 17 times each year.” The study also found that “Men have significantly lower levels of prolactin (a hormone found in emotional tears) compared with women.” In addition, depending on the society, men are often discouraged from shedding tears as it is not viewed as “manly” to do so.

Among the songs listed on the C-FUN ALL-CANADIAN TOP TEN with “Hard To Cry” were several songs that charted concurrently on the C-FUNTASTIC FIFTY. These included “Sunny Goodge Street” by Tom Northcott, “Do It To ‘Em” by B.T.B 4 (Big Town Boys 4), “Fisherwoman” by The Collectors and “This Time Long Ago” by The Guess Who? Other songs that charted on the C-FUNTASTIC FIFTY that concurrently charted on the C-FUN ALL-CANADIAN TOP TEN in 1966-67 include “His Girl” by The Guess Who?, “Looking At A Baby” by The Collectors, “Go Go Round” by Gordon Lightfoot, “Canada” by The Young Canada Singers, “Listen To Me” by One Way Street, “Frustration” by The Painted Ship, “Please Forget Her by The Jury, “Call Up The Man” by The Shadracks, “Brain Washed” by David Clayton-Thomas, “It’s True” by The Eternal Triangle, and “Remorse” by Mike Campbell. The C-FUN ALL-CANADIAN TOP TEN was featured as an additional chart published from September 10, 1966, to September 9, 1967.

Fifty years later a mint condition copy of “Hard to Cry” costs as much as $1,000. The song was covered by the Swedish punk band, The Nomads, in 1996. A second single, “Eight Hour Day”, with its’ anti-establishment opening line, “I want money, but I don’t want to work…” failed to chart.

At the time, The Northwest Company was featured numerous times on a local CBC show called Where It’s At. Other local recording artists on the show included Tom Northcott, the Collectors and the Poppy Family. They also appeared on the CBC show Let’s Go. The band’s third single was an experiment with sunshine pop. “Time for Everyone” spent three weeks Hit Bound and then five weeks on the CKLG chart, peaking at #17 in the fall of 1968.

Incidentally, the producer of The Northwest Company’s singles was Daryl Burlingham. He was known on CFUN, and later CKLG, as Daryl “B”. In 1968 Daryl “B” was on the afternoon 3 pm to 6 pm CKLG show, “on BOSS Radio.” A June ’68 weekly record survey informed ‘LG listeners:

“Daryl & Western Canada’s finest, Chuck Steak, argue daily — 4:30 – 6:00 p.m. — about the Lower Mainland traffic situation. Don’t miss Daryl.” Would that we could fret about the traffic volumes in Vancouver, such as they were in 1968 all these years later. At the end of 1968 The Northwest Company released a single on Apex Records called “Can You Remember” b/w “The Sunday Song”. It was Apex 77091, just recorded after a song called “I Don’t Live Today” by The Purple Haze, a song that charted into the CHED Top 20 in Edmonton, Alberta, in November 1968.

While they continued to perform in concert, it would be several more years before The Northwest Company would return to the recording studio. One of these became their highest charting single in Vancouver, peaking at #12, “Rock ‘N Roll Lover Man”, written by Richard Stepp. It became the band’s signature tune. It was a blend of blue-eyed funk and psychedelic-rock, of the Small Faces with Humble Pie. Rick McCartie left the band prior to the release of this song, and it is Richard Stepp on lead vocals that you hear.

In the late 60s into the early 70s The Northwest Company were opening acts for The Beach Boys, Paul Revere & The Raiders, The Who, Lee Michaels, The Byrds and Country Joe & The Fish. In 1970 Vidar Skofteby got married and left the band, leaving them as a trio. In 1971 Ray O’Toole left the band and was replaced by Mother Tucker’s Yellow Duck guitarist, Leslie Law. Another guitarist was added, Dan Smith, making the group a foursome again. After a series of guitarists, Ray O’Toole rejoined the band. A final single in 1973 failed to yield any chart action and the band broke up by the end of the year.

Ray O’ Toole would go on to become a member of popular country rock band, Blue Northern. The band’s hit in 1981, “Can’t Make No Sense“, was written by O’Toole. In 1983, “Rock ‘N Roll Lover Man” was included on the History of Vancouver Rock and Roll, Volume 3 compilation issued by the Vancouver Record Collectors’ Association

On his website, Richard Stepp details his musical career after the Northwest Company split. He went on to play with Home Cooking (1974-75), High Time (1975-1976) and Shakedown (1976-77). The latter band he was the front man for. He also worked at Mushroom Studios. In 1979 Stepp – who wrote to me in an email – confirmed that he released his debut album Holiday in Hollywood. In 1980 Richard Stepp was nominated for a Juno Award for Most Promising Male Vocalist of the Year. Another nominee was Bryan Adams. But the winner of the Juno that year went to Montreal’s Walter Rossi. Richard Stepp also formed The Richard Stepp Band in 1981. He toured British Columbia and Alberta with his second album self-titled Richard Stepp.

Subsequently, Richard Stepp had released Freewind (1984), Hooray For Santa Claus (1997), It Only Takes One (2002) and Stepp On a Steinway (2002). The latter album featured Stepp on the piano with no backing musicians. On the album he recorded a variety of pop music classics including “Mack The Knife”, “Blueberry Hill”, “Island In The Sun”, “Stagger Lee”, Chantilly Lace” and “Over The Rainbow”.