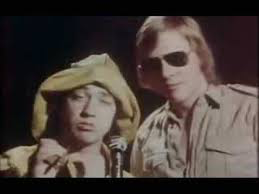 Johannes Hendrikus Jacob van den Berg was born in the Netherlands in 1946. When he turned 13 he taught himself to play guitar in his family’s tenement home. He played guitar in a band called The Starfighters, based in The Hague. When he was seventeen his family moved to Australia in 1963. The following year, going by the anglicized name of Harry Vanda, he became the lead guitar player for a Sydney band called The Easybeats. A co-founder of the band was George Young. Also an immigrant to Australia, in his case from Glasgow, Scotland, George Redburn Young was a rhythm guitarist. After one of the coldest winters in Scotland on record in 1962, the Young family saw a Television ad from the Australian government promising travel assistance for families seeking a new start with a life in Australia. In 1964 The Easybeats often held band practices in a local laundromat. Vanda and Young became a songwriting duo and scored an international hit in 1966 titled “Friday On My Mind”. The song climbed to #9 in Vancouver, #1 in The Netherlands and Australia, #2 in New Zealand and #16 on the Billboard Hot 100 in the USA.

Inspired by the British Invasion in 1964, The Easybeats charted seven Top Ten hits in Australia between 1965 and 1970, including two #1 hits down under. After they split in 1970, Vanda and Young went on to produce recordings by AC/DC. The duo wrote a hit for John Paul Young called “Yesterday’s Hero” which went to #8 on the Australian pop chart in 1975.

In 1976 Harry Vanda and George Young formed as a duo billed as Flash And The Pan. Their first single release, “Hey St. Peter”, went to #5 in Australia in 1976. The song charted to #6 in Belgium and #7 in the Netherlands in the summer of 1977. In 1977 their song, “Love Is In The Air”, was recorded by John Paul Young which became an international Top Ten hit.  “Hey St. Peter” was released in Flash And The Pan’s self-titled debut album in December 1978. By the fall of 1979 CFUN in Vancouver chose to give the disc a spin. John Paul Young told an Australian reporter in 2016 more about the inspiration for the song “Hey St. Peter”. “George was in New York chatting to the hotel doorman about the weather and the African American guy says ‘Oh well, man, when my time comes, I am going to say to St Peter “You can’t send me to hell, I have done my time in hell in New York!”‘ George just picked up things you and I would say and turn them into songs.”

In 1981 the B-side of “Hey St. Peter” was recorded by Grace Jones who included “Walking In The Rain” in her album Nightclubbing. In 1983, Young and Vanda recorded “Waiting For A Train” which went to #7 in the UK. In 1996 Meatloaf had a Top 30 single with the Vande-Young composition “Runnin’ for the Red Light (I Gotta Life)”. In 2005 Harry Vanda established Flashpoint Music which opened a recording studio. Vanda has been a producer for many decades including indie rock back British India. In 2017 George Young died at the age of 70.

In 2016 John Paul Young performed in several Australian cities the Vanda and Young Songbook. In an interview it was reported  that the Easybeats songs were simplest to perform. But, “Young said the Flash and the Pan songs were the most challenging to perform because of George’s “talk singing”, which approximated an early form of rap or the very least, spoken word. “Walking In The Rain, which was covered by Grace Jones, has me a little scared because it’s just such a moody, performance piece with George’s talking. George never, ever liked his voice.”

2 responses to “Hey St. Peter by Flash And The Pan”