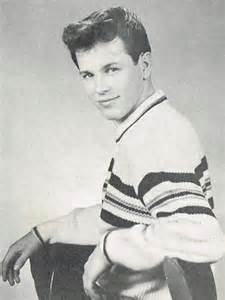 Curtola had his second chart hit in Vancouver with “Hitchhiker.” It was one of eight top ten hits for Curtola on the Vancouver pop charts between 1961 and 1963. Other hits included “Indian Giver,” “Three Rows Over” and “Fortune Teller.” “Hitchhiker” is a song about a hitchhiker on the road to love. In 1962, the idea of hitching a ride was mostly thought of as a safe activity.

Hitchhiking is defined as a means of transportation gained by asking people, usually strangers, for a ride in their car or truck. A ride is usually, but not always, free. If the hitchhiker wishes to indicate that they need a ride, they may simply make a physical gesture or display a written sign. In North America, United Kingdom and most Western and Central Europe, the gesture involves extending the hitchhiker’s arm toward the road and sticking the thumb of their outstretched hand upward with the hand closed.

In 1953 Ida Lupino directed a film noir classic called The Hitch-Hiker. Two men on a fishing trip pick up a hitchhiker named Emmett Myers, who turns out to be a psychopath who has committed multiple murders. Police believe Myers is traveling alone, so he holds the two men hostage to avoid detection as he flees towards the Mexican border and listens to news broadcasts of the police chase on the car radio. The film’s plot was chilling for mid-50’s audiences as hitchhiking was thought of as a safe activity. The film opened with this text on the screen: “This is the true story of a man and a gun and a car. The car might have been yours – or that young couple across the aisle. What you will see in the next seventy minutes could have happened to you. For the facts are actual. Going my way, all of the way?
Oh, oh, oh, oh this is a wonderful day.
Open your dreams, please let me in,
We’ll go to places that no other has been.

Going my way, all of the way?
Oh, oh, oh, oh this is a wonderful day.
Open your dreams, please let me in,
We’ll go to places that no other has been.

In 1961 the metaphor worked, and Bobby Curtola became a teen idol coast to coast in Canada.

Another pop hit after Bobby Curtola’s hit was from 1962 called “Hitch Hike,” by Marvin Gaye. In 1969 the pop group, Vanity Fare, had a big hit titled “Hitchin’ A Ride.” The sunny song showcased the public perception that hitchhiking in the late 1960’s was seen as an adventurous and fun activity. Other songs that celebrated hitchhiking included “Sweet Hitch Hiker” (Creedence Clearwater Revival), “Take It Easy” (The Eagles), “Chevy Van” (Sammy Johns) and “Me And Bobby McGee” (Janis Joplin and Gordon Lightfoot). However, in the 1971 hit, “Riders On The Storm,” The Doors presented hitchhiking as a dangerous activity. “There’s a killer on the road. His brain is squirming like a toad….if you give this man a ride sweet memory will die, killer on the road.”

While some people hitchhiked in the 1920’s, it was during the Great Depression when people were hard up for cash that hitchhiking became more popular. In fact, it was the 1934 Oscar winning film for Best Picture, Best Director, Best Actor and Best Acress, It Happened One Night, that sparked a rise in hitchhiking in America. Claudette Colbert hitched up her dress to reveal her nylon stockings and a passing car screeched to a halt, putting Clark Gable’s hitching with a thumb to shame. The culture of hitchhiking continued in the innocent glow of that movie through the Sixties.

But popular perceptions of the danger of hitchhiking shifted with more horror and suspense movies into the mid-70’s with hitchhikers as villains in movies like Texas Chainsaw Massacre. In North America hitchhiking has been on the decline since the 1970s. This is owed to a number of factors including lower air travel costs due to deregulation, the presence of more money in the economy to pay for travel, more numerous and more reliable cars, a lack of trust and fear of strangers. On May 19,1977, a twenty year old hitchhiker named Colleen Stan was kidnapped by Cameron and Janice Hooker in Red Bluff, California. Stan was hitchhiking on her way to a friend’s birthday party. Until August 1984 Colleen Stan was a sex slave to Cameron Hooker and often confined in a wooden box. The trial in 1985, which ended in a life sentence for Cameron Hooker, was sensational and gruesome. And the press reported on the crime story extensively. It put a chill on hitchhiking in America, and had a ripple effect here in Canada.

Between 1960 and 1968 Curtola had continual single and album releases on the Tartan label in Canada. The managers and main songwriters were brothers Dyer and Basil Hurdon. The Del-Fi label released some of those singles in the US. His biggest hit, “Fortune Teller”, was released in 1962 and went Gold in Canada. The now Rock n’ Roll Hall of Fame DJ, Red Robinson, was key in the success of “Fortune Teller”. Seeing its potential internationally, Robinson sent it to Disc Jockey’s in Seattle at KJR and Hawaii’s KPOI in Honolulu. A major US record deal was signed and “Fortune Teller” went on to sell two and a half million copies. Bobby Curtola was invited to tour with Dick Clark and his Cavalcade of Stars. While on tour in England that same year, Bobby met The Beatles and appeared on the famous British TV variety show Thank Your Lucky Stars. Curtola also enjoyed other Top 20 hit in ’62 in Vancouver with “You Must Belong To Me” and “I Cry And Cry“.

In 1963, Bobby Curtola had five songs climb into the Top Ten on CFUN in Vancouver. These were “Destination Love,” “Gypsy Heart“, “Indian Giver”, “Three Rows Over” and “Move Over”. Curtola had his second number-one hit in Vancouver titled “Destination Love”. After the single began to chart on CFUN in mid-January ’63, Curtola was in Vancouver and had a live interview with Red Robinson. Curtola performed in concert in Vancouver in 1963 when he was at the height of his popularity. Red Robinson said in an interview after Curtola died “Bobby broke out in the early Sixties and when he appeared in Vancouver at Park Royal mall over 3,000 kids showed up. I met him when I was program director at C-FUN/Vancouver and he  (later) performed for C-FUN Day at Kits Showboat. Almost 10,000 showed up for this annual event, big numbers for the Sixties!”

In June of 1964, Bobby Curtola got to sing what would become an ear-worm for radio listeners across all radio and TV stations in the mid-sixties. He became the first pop singer to record a jingle that sounded like a Top 40 Hit Single. The jingle was “Things Go Better with Coke.” He signed an exclusive contract with Coca-Cola to be their #1 Spokesman. Bobby, also co-wrote “The Real Thing” which was used for the commercial “Coke’s The Real Thing.” After turning twenty-one, Bobby was interviewed by John Pozer on his TV show in Ottawa, Saturday Date, which ended with the pair toasting to his success with coke bottles. In the interview Curtola reveals that the jingle was made in Nashville and that Elvis’ former backup group, The Jordanaires, backed Curtola in recording the commercial. Bobby Curtola went on in 1965 to host The After Four Show in Toronto. In 1966 he won a RPM Gold Leaf Award for becoming the first Canadian to have an album go gold. In 1973 Curtola became the CTV host of Shake, Rock and Roll. For many years he also hosted the Miss Canada and Teen Canada beauty pageants. And from 1972 into the mid-90’s Bobby Curtola had a career performing in Las Vegas, often as the opening act of Bob Hope. Over the years Bobby Curtola has toured Asia, Europe, South America and across North America.