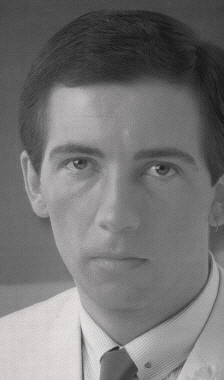 Peter Campbell McNeish was born in 1955, in the town of Leigh, ten miles west of Manchester. His parents were working class, with his mother a mill worker and father working in a coal mine. In 1974 he met Howard Trafford while attending Bolton College, ten miles northwest of Manchester. In 1975 they went to London to see the Sex Pistols. The following year they formed a punk rock band they called the Buzzcocks. McNeish adopted the stage name Pete Shelley, with his “surname” taken from his favorite poet Percy Bysshe Shelley. Trafford took the stage name Howard Devoto. Shelley and Devoto co-wrote the Buzzcocks first single “Orgasm Addict”, released in 1977. After the band’s first EP, Howard Devoto left the Buzzcocks. The Buzzcocks fused their hard-driving punk sound with some pop sensibilities. This got them on the UK Singles chart as they climbed into the Top 40 in 1978 with “What Do I Get?” and “Love You More”.

But the debut single from their second album, Love Bites, titled “Ever Fallen In Love (With Someone You Shouldn’t Have)” which brought them critical acclaim and commercial success. The single peaked at #12 on the UK singles chart in 1978. Between 1978 and 1979 the Buzzcocks managed to chart six singles into the UK Singles Top 40, a remarkable feat for a punk band. Pete Shelley wrote (or co-wrote) most of the songs for the band. He was also typically the lead singer, including on “Everybody’s Happy Nowadays” and “Promises” in 1979. Bandmate Steve Diggles was the lead vocalist on “Harmony In My Head”, the band’s last Top 40 entry.

The Buzzcocks split up in 1981, in part due to difficulties with their record label. Pete Shelley decided to pursue a solo career. In 1981 he released his first single “Homosapien”. 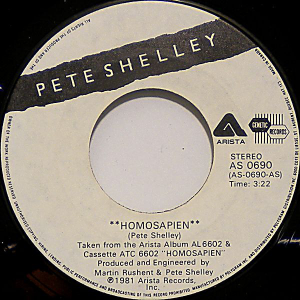 “Homosapien” was released as a single in 1981 and was banned by the BBC at the time of its debut due to an “explicit reference to gay sex” in its lyrics. At the time of the song’s release Shelley spoke openly about his bisexuality. The song’s lyrics concern a connection between “a shy boy” and “a coy boy.” Shelley sings “I’m a cruiser, you’re the loser. Me and you sir, homosapien too. Homosuperior in my interior…”

In December 1967, Canada’s then Justice Minister Pierre Trudeau had told Canadians “there’s no place for the state in the bedrooms of the nation.” But in the early 80’s, “homosexual” sex was still a scandal for a majority of people in Canadian society. It was only in the late 1980’s that the province of Ontario protected persons “suspected” of having same-sex relations from being evicted from rental accommodation by their landlords. In the early 1980’s numbers of participants in Pride Parades in Vancouver wore paper bags over their heads, for fear of being recognized and reported to their employer. At the time, those who identified as gay, lesbian or bisexual –  teachers, priests, police officers and others -feared they would be fired from their job if it was known that they were “homosexual.”

It was only in 1980 that Canada’s largest Protestant denomination, the United Church of Canada, began to discuss in all of its congregations In God’s Image…Male and Female: A Study on Human Sexuality. The study provided education on human sexuality and sexual orientation, including allowing “declared homosexual people” to be ministers. Some ministers in United Church congregations preached against acceptance of “homosexuality” with sermon titles like “Adam and Eve, not Adam and Steve.” Nonetheless, in 1988 the United Church of Canada declared that all people “regardless of sexual orientation” were welcome as full members. The shift in the denomination was reflected in late 1980’s polling across Canada that showed greater acceptance of same-sex relationships, especially among Canadians under 45 years of age.

So Pete Shelley’s “Homosapien” was quite edgy, especially mentioning gay sex in the lyrics. However, Top 40 radio in Vancouver had a majority of listeners between 18 and 35. CFUN was able to program “Homosapien” for six weeks on its Top 30 list without having radio listeners call up to complain about the song. Consequently, Top 40 radio was a sign of changing sensibilities and growing openness about human sexuality through the decade.

With “Homosapien” Shelley choose synthesizer as the primary instrument for the single. This was a departure from the Buzzcocks sound which had featured lead guitar, bass guitar and rhythm guitar on their studio albums in the late ’70s.

In 1981 Pete Shelley had a Top 30 Billboard Dance chart hit in the USA titled “I Don’t Know What It Is”. The song was a track from Shelley’s Homosapien album.

In 2005 Shelley re-recorded “Ever Fallen in Love” with an all-star group, including Elton John, Roger Daltry from The Who, Peter Hook from New Order and Joy Division, David Gilmour from Pink Floyd, and Robert Plant from Led Zeppelin. Proceeds from the sale of the single went to Amnesty International.

In 2009 Pete Shelley and Howard Devoto both received honorary doctorates from Bolton College in the UK for their contribution to music. In 2012 he moved to Estonia to live with his Estonian wife, Greta. Pete Shelley died of a heart attack at the age of 63 in Estonia in December 2018.

Tracey Thorn, formerly one half of the dance music duo Everything But The Girl, also paid her respects, quoting from the Buzzcocks’ track “16 Again”: “‘But after all life’s only death’s recompense.’ RIP.” Said Thorn, “Oh God but I loved Buzzcocks. And Pete Shelley was an amazing songwriter.” Other tributes included Green Day’s Billie Joe Armstrong, the Smiths’ drummer Mike Joyce, Red Hot Chili Peppers’ bassist Flea, R.E.M.’s multi-instrumentalist Mike Mills, the Sex Pistols’ Glen Matlock, Jeff Ament of Pearl Jam, the bandmates of Duran Duran and Billy Bragg. Spandau Ballet’s Gary Kemp wrote “Pete was one of Britain’s best pure pop writers, up there with Ray Davies.” Kemp recalled that going to a Buzzcocks concert in 1976 had “helped to change my life”.