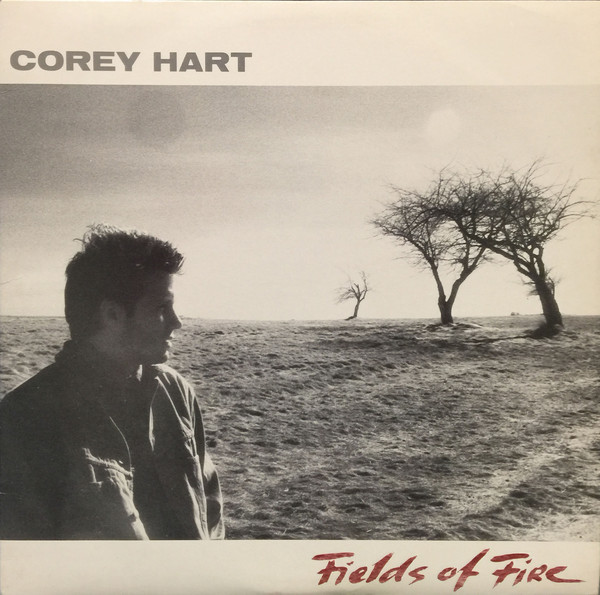 Corey Hart was born in 1962 in Montreal, Quebec. He is best known for his international Top Ten hits “Sunglasses at Night” (#7 Billboard Hot 100) and “Never Surrender” (#3 Billboard Hot 100). Hart is known as one of Canada’s most successful singer-songwriters. He’s sold over 16 million records worldwide. On the Billboard Hot 100 Hart scored 9 consecutive Top 40 Hits. Back in Canada he succeeded in charting 30 top 40 singles (including 11 Top 10 singles during his career). Hart is a Grammy Nominated, ASCAP & multiple Juno and ADISQ award winner. He has also written and produced several songs for fellow Quebec recording star Celine Dion.

Though he was born in Montreal, Hart grew up variously in Key Biscayne, Florida, Mexico City and Spain. During his childhood he became fluent in English, French and Spanish. His first time as a performer was in front of UK singer Tom Jones, when eleven year-old Hart sang the Michael Jackson tune “Ben”. In 1980 Hart was one of Canada’s entries at the World Popular Song Festival in Tokyo. While there he met fellow Canadian entry, Dan Hill, along with American recording artist Christopher Cross (“Sailing”).

In 1981 Hart heard Billy Joel in concert in Montreal and contacted Joel. Joel was impressed with Hart’s virtuosity on drums, guitar, vocals, piano and as well as a songwriter. Hart went to Long Island to record some demos at Joel’s recording studio in Oyster Bay. In 1982 Hart recorded his debut album, First Offense, in the UK. Hart had the humbling experience of Canadian listeners only being interested in his music if he could break into the US record market.

In 1984 “Sunglasses At Night” peaked at #7 on the Billboard Hot 100. It only climbed to #24 on the Canadian RPM charts, #11 in Montreal, #13 in Toronto and got airplay, but no chart run, in Vancouver. (The latter was a big surprise to this writer). The song became a Top 20 hit in Australia, New Zealand and Germany. With international fame, Canadians warmed up to Hart as one of their own. Suddenly, things changed and Hart was a pop star. He later recalled:

“In retrospect, I was totally unprepared for the fan adulation. I really couldn’t go out anywhere without being mobbed or chased by my fans. The transformation from unknown artist to rock star was surreal and overwhelming. The power of video certainly played a key role. It was the same for many artists of that decade like Cyndi Lauper, Madonna and George Michael to name but a few.”

His fourth was “Eurasian Eyes“, a track that made it’s way onto the Soundtrack to the 1986 film 9 1/2 Weeks, starring Kim Basinger and Mickey Rourke.

That year Hart released his studio album Fields of Fire. The lead single was titled “I Am By Your Side”. 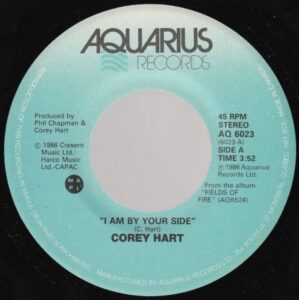 “I Am By Your Side” was written by Corey Hart. The song is a statement made to one’s lover of steadfast support and protection. A foundation for their lover’s vulnerabilities: “And I will never disappear. Turn the darkest corner, I’ll be there. With every day I’m calling out your name.” As well, the singer notices the dynamic is reciprocal: “I can always run to you.” The couple are there for each other. This is not just one person being strong all the time for someone who is fragile.

In 1987 Hart was up for more Juno nominations: Best Male Vocalist of the Year, Best Album Graphics (Erika Gagnon for Fields Of Fire), and Single of the Year (“Can’t Help Falling in Love”).

Next Hart also released his third album, Fields Of Fire. In the midst of these releases came a non-album synth-pop single titled “2 Good 2 Be Enough”.

Corey Hart had several more big hits in the next ten years. His next single release was “In Your Soul”, a track on his 1988 album Young Man Running.

Hart moved with his spouse Julie Masse, and their four children, to the Bahamas in 1999. Between 1998 and 2014 Hart didn’t release any new solo singles or albums. In 2003, Hart became involved in a joint venture record label business which he named Siena Records. It was headed by Seymour Stein, the CEO of Sire Records, and Steve Kane, Warner Music Canada’s President.

On June 3, 2014, after a 12 year break from live performance, Corey Hart took to the stage playing before a sold out audience at the Montreal Bell Centre Arena. It was billed as “One Night – Three Decades Of Music.” Hart also released his autobiography entitled Chasing The Sun the same night. On June 25, 2019, Corey Hart appeared in concert in Vancouver at the Rogers Arena.