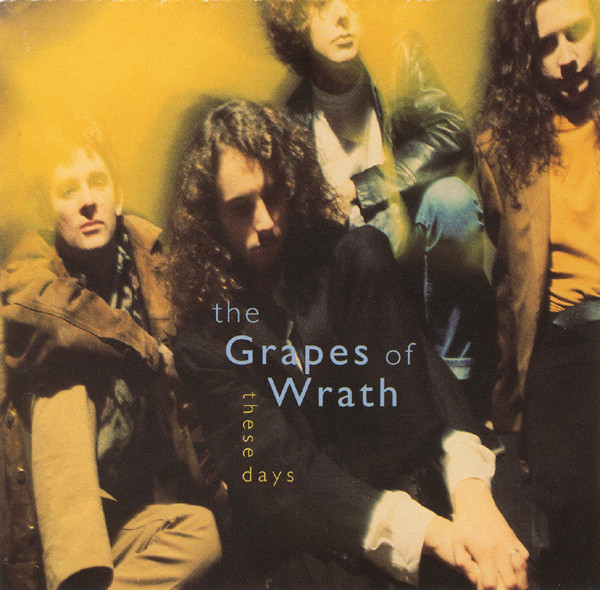 Peak Month: October 1991
13 weeks on CKLG’s Vancouver Charts
Peak Position ~ #9
Peak Position on Billboard Hot 100 ~ did not chart
YouTube.com: “I Am Here”
“I Am Here” lyrics

When they were eight years old Kevin Kane and Chris Hooper met. Four years later they became good friends and formed a band at the age of 13, enlisting Chris’ younger brother Tom to play bass. In the late 70’s they formed a punk band they called Kill Pigs. They eased of the harsh sound and reformed in 1983 as the Grapes Of Wrath. The band’s name came from the iconic 1939 novel by John Steinbeck about the dust bowl and the hopeless circumstances of tenant farmers trying to make a living during the Great Depression. The phrase comes from a line in “The Battle Hymn Of The Republic” from 1861, and references several verses from the Book of Revelation 14:18-19 about an angel pressing grapes into the wrath of God. Their debut album, September Bowl Of Green, was released in 1985. Their second album, Treehouse, featured backing vocals by Tom Cochrane, who also produced the 1987 album. In 1989, the band added Vincent Jones to their lineup and released Now And Then. In the fall of 1989, their single, “All The Things I Wasn’t”, made the Top 30 in Vancouver and Hamilton. That fall they toured as the opening act for the Canadian singer, Sarah McLauchlan.

In a 1990 article, the Chicago Tribune compared The Grapes Of Wrath band from Kelowna, British Columbia, to The Beatles, The Byrds and Simon & Garfunkel. In the Chicago Tribune review, Kevin Kane commented on the bands’ lyrics. ”People say, `Why don`t you write happy songs?` or `Why are you so happy in person and not like your songs?` when they meet us. I guess it`s a way of working things out. I subject myself and others around me to these mini-dramas so I`ll never run short of material.”

As a foursome, the Grapes Of Wrath released These Days in 1991 which featured “I Am Here” as one of the albums’ singles. “I Am Here” concerns two perspectives in a relationship. One partner thinks the other doesn’t care enough and they are not being present and tuned into them. They also wonder if their partner will be there when they need them to be. The other partner acknowledges that even though it may seem that sometimes they’re not focused and paying attention, they assert, “I am here” and when you need me “I’ll be there.”

Buddhist author, Thich Nhat Hanh, offers this wisdom: “When you love someone, the best thing you can offer is your presence. How can you love if you are not there?” In her article “Are You Fully Present in Your Relationship or Marriage?”, Ora Nadich lists several things to check to gage if you are truly being present, being “here”, when you are with your partner. She writes:

1. “When your partner or spouse is talking to you, stop whatever else you’re doing and give them your undivided attention.”

2. “If your mind starts to wander when your partner or spouse is talking to you, look into their eyes and feel the love you have for them. That will connect you to them in a meaningful way, as opposed to taking them for granted.”

3. “If you find yourself distracted when your partner or spouse needs to talk to you, share that with them so they’ll know what’s going on with you instead of having to wonder. When we communicate honestly with the people we love, it makes us feel closer, and we understand each other better.”

4. “If you find yourself not fully present with your partner or spouse, ask yourself where you are. Are you thinking about work, someone else, or what you’re going to have for dinner? It’s important to know what’s taking you out of the present moment, and whether it’s worth making it more important than the person you love.”

The Grapes Of Wrath bandmates may well have been aware of relationship challenges, not only within the band, but observed others in relationships who were checking out instead of being present. The assurance the singer in “I Am Here” offers was needed confirmation for any radio listener who was in a relationship with someone who was a present in body, but checking out mentally and emotionally.

“I Am Here” peaked at #7 in Hamilton and #9 in Vancouver. In the winter of 1991-92, the Grapes Of Wrath were getting traction with their singles “You May Be Right.” They were getting more attention from the radio market and bookings in the USA. Suddenly, the band imploded. The Victoria Times-Colonist would recall years later that the bands members were firing arrows at each other through the press.

In 2000, Kevin Kane and Tom Hooper collaborated to release the album, Field Trip, without original member Chris Hooper. But acrimony again accompanied the new iteration of the Grapes Of Wrath, and Kane and Hooper split up in 2001. In the intervening years, Kevin Kane has made and repaired guitars. He’s also worked with the Great Lake Swimmers.

In 2010 The Grapes Of Wrath performed at the Surrey Fusion Festival in Surrey, British Columbia. This was the first time the original three bandmates had played together since 1992. The band released another album in 2013, a folk-rock effort titled High Road. The Grapes Of Wrath recently performed in Vancouver at Venue on Granville Street on October 15, 2018. This capped off an eight city tour over two weeks across Quebec, Ontario, Alberta and British Columbia. Also, during the October 10-14, 2018 BreakOut West music industry event in Kelowna, the Grapes Of Wrath were inducted into the Western Canadian Music Hall of Fame.

2 responses to “I Am Here by Grapes Of Wrath”