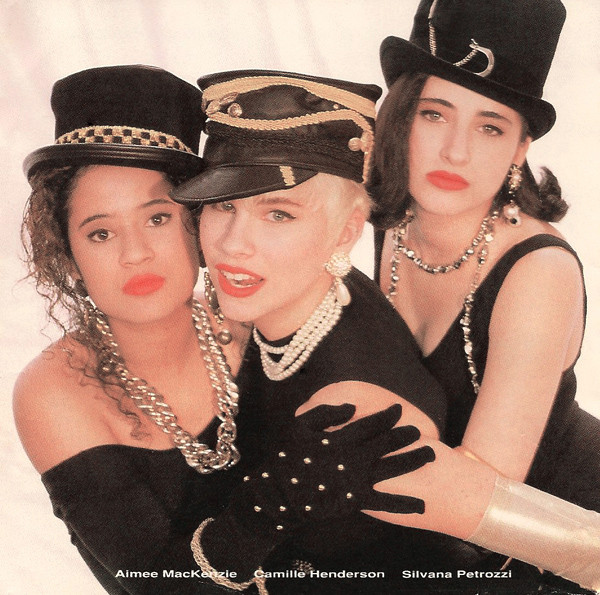 Camille Henderson was born in Vancouver, BC, in 1970. From the age of ten she was a working actor in film, stage and TV. At the age of fifteen she starred in the Canadian film directed by Sandy Wilson titled My American Cousin. She played the role of Shirley, a preteen girl. Her father, Bill Henderson, was a member of the Vancouver Sixties band The Collectors. He continued with most of his bandmates as they morphed into Chilliwack in 1970.

Silvana Kane was born in Peru. When she was seven years old her family moved to Vancouver. Once settled in her new hometown, Silvana began to learn English, violin and piano. Though her family moved to Milwaukee (WI) and back to Peru, they settled again in Vancouver when she was 14. As a member of the West End Girls Silvana was billed as Silvana Petrozzi. In 1990 the West End Girls formed as a trio with Silvana and Camille, and the third member of the group, Amiee MacKenzie.

The West End is a downtown neighborhood in Vancouver. On its western boundary is Stanley Park. To the north is Georgia Street and the newer neighborhood of Coal Harbour. To the south is English Bay and False Creek. And to the east is Burrard Street with its adjacent neighborhoods Yaletown and Downtown Vancouver which includes the Granville Mall, Chinatown, Japantown and Gastown. The West End features Robson Street formerly known as Robsonstrasse, given the numerous German commercial businesses on the street. The West End houses many heritage buildings and has traffic calmed streets and bike lanes. A seawall along English Bay and False Creek is lined with a number of parks including Sunset Beach Park. Other parks include Alexandra Park, Morton Park with its A-Maze-ing Laughter featuring 14 bronze figures. The West End is also home to Western Canada’s largest gay community and the “gay village” on Davie Street. With 20-39 year olds the largest demographic, the West End is considered trendy and hip.

In choosing to name their group the West End Girls, they were taking a name that already had wide recognition. Camille, Silvana and Amiee were each successful in auditioning for the group. The producer for the West End Girls, John Dexter, was the brainchild behind the group’s creation. Their debut (self-titled) album was released in 1991 and spawned two Top 40 singles and two Top 10 hits: “Not Like Kissing You” (which made the year-end Top 100 in Vancouver) and “I Want You Back”. 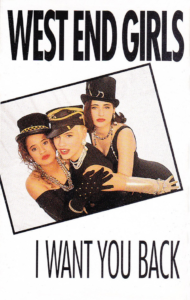 “I Want You Back” was cowritten by Berry Gordy Jr., Alphonso “Fonce” Mizell, Frederick “Freddy” James Perren, and Deke Richards. The four songwriters were known as The Corporation, and assembled in 1969 to write songs for the Jackson 5. They wrote the groups first three single releases – “I Want You Back”, “ABC” and “The Love You Save” – all number-one hits on the Billboard Hot 100 and Billboard Best Selling Soul Singles charts. The Jackson 5’s “I Want You Back” peaked at #10 in Vancouver (BC) in 1970. The Corporation also co-wrote a Jackson 5 #2 hit titled “Mama’s Pearl”.

Berry Gordy Jr. was born Berry Gordy III in Detroit in 1929. He dropped out of high school and became a boxer before being drafted into the Korean War. When he returned to the United States in 1953, he got acquainted with an amateur boxer and singer named Jackie Wilson. Gordy wrote “Reet Petite”, “To Be Loved”, “Lonely Teardrops”, and “That’s Why (I Love You So)” for Jackie Wilson; “You Got What It Takes” and “I Love The Way You Love” for Marv Johnson; “Money (That’s What I Want)” for Barrett Strong; “All I Could Do Was Cry” for Etta James; “Shop Around” for the Miracles; “Do You Love Me” by the Contours; “I’m Living In Shame” for Diana Ross and the Supremes and “I’ll Be There” for the Jackson 5.

Fonce Mizell was also a producer of “Boogie Oogie Oogie” by A Taste Of Honey, and albums by Michael Jackson, Edwin Starr, Mary Wells, the Miracles and others. Freddy Perren went on to produce/write “Boogie Fever” and “Hot Line” for the Sylvers; “Do It Baby” and “Love Machine” for the Miracles; “Heaven Must Be Missing An Angel” for Tavares; “Love Me”, “Hello Stranger” and “If I Can’t Have You” for Yvonne Elliman; “Shake Your Groove Thing” and “Reunited” for Peaches & Herb and “I Will Survive” for Gloria Gaynor. While Deke Richards co-wrote “Love Child” for Diana Ross and the Supremes.

“I Want You Back” is a song about someone who, while in a relationship acts like they don’t want their sweetheart around. But, now that their sweetheart has been wooed by another, the ex is desperately hoping they can get back in their heart (and leave their new romantic partner in the dust). The ex confesses “I was blind to let you go” and declares “all I need is one more chance.”

In 2004 Silvana Kane (vocals) and Adam Popowitz (guitar) formed Pacifica, a world music band. They were joined by Toby Peter, from Salvador Dream, on bass and drums. In time the band changed their spelling to Pacifika. Between 2004 and 2014 they released four studio albums.

Amiee MacKenzie joined an R&B group in Vancouver later in the ’90’s called D-Cru. The band released several albums in the late ’90’s and early 2000’s. D-Cru received a Juno nomination for Best R&B/Soul Recording in 2001 for “I Will Be Waiting”. More recently Amiee MacKenzie has been a swimsuit model. Janele Woodley went on to be part of the pop-rock duo A Perfect Day. Celia-Louise Martin went into acting.