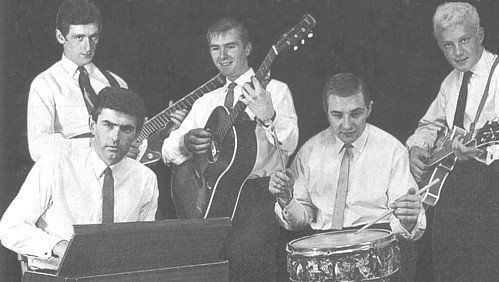 In 1937 Clemente Anselmo Arturo “Clem” Cattini was born in North London. At first he worked at his father’s Italian restaurant. He then joined Johnny Kidd & the Pirates playing on their hit “Shakin’ All Over”. Then he became producer Joe Meek’s in-house drummer, backing artists such as John Leyton and Don Charles, before helping found the Tornados in 1961, and playing on their international No. 1 hit “Telstar”. Over recording history in the United Kingdom, Cattini has been the drummer on hundreds of recordings by artists as diverse as Cliff Richard, The Kinks, The Yardbirds and Lou Reed. Cattini has been a session drummer on 44 different singles that reached #1 in the UK. Other members of The Tornados original line-up were Heinz Burt on bass guitar, George Bellamy on rhythm guitar, Alan Caddy on lead guitar and Roger La Vern on keyboards. They were the band that toured with UK teen idol Billy Fury.

George Bellamy was principally a country and western singer. But his three years with The Tornados really launched his career in the music industry. He wrote the instrumental “Ridin’ The Wind” for the band. There was a band in Hollywood playing instrumental surfing tunes also called The Tornadoes. They had a tune on the CFUN charts from December 15, 1962, to January 26, 1963, called “Bustin’ Surfboards”. There was a lot of confusion about this instrumental group from Hollywood and the UK Tornados. To add to the confusion the CFUN January 5, 1963, record survey featured the UK Tornados spelled as “Tornadoes” on two charted songs. These were their former #1 hit, “Telstar”, now at #14 on the chart and “Ridin’ The Wind”, which debuted at #22. Further down the chart at #41 was “Bustin’ Surfboards” by “Tornadoes” (from Hollywood). On the 45 RPM released in the United Kingdom on London Records for “Ridin’ The Wind” the recording artists credited were spelled The Tornados. But on the London Records release in Canada the recording artists credit for the tune was spelled The Tornadoes.

“Ridin’ The Wind” was one of the tracks off the Telstar’s debut album released in North America called The Original Telstar: The Sounds of the Tornadoes. This only added to the name-spelling confusion as London Records issued EP’s and albums in the UK spelling the band as Tornados. The instrumental was not a hit single in the UK or the USA. Other instrumentals on the album included the “Popeye Twist” written by lead guitarist Alan Caddy, “Chasing Moonbeams” written by Roger La Vern and “Dreamin’ On A Cloud” written by Heinz Burt.

Meanwhile, in the UK, the follow-up single to “Telstar” was “Globetrotter” which climbed to #5 on the UK charts in early 1963. This was followed in the UK with “Robot” which peaked at #19 on the British singles charts. Their third release after “Telstar” was “The Ice Cream Man”. It climbed to #21 on the UK charts. CFUN gave the instrumental a spin across the summer of ’63 and it peaked at #14 in Vancouver. This gave The Tornados (billed on record labels in North America as The Tornadoes) their third song in the Top 20 on Vancouver’s 1410 CFUN station in ten months. The first edible cone was invented in 1888 by Mrs Agnes B. Marshall in the UK. During prohibition in America and Canada, soda fountains and ice cream shops proliferated in place of taverns. Henry Burt purchased 12 trucks in Youngstown, Ohio, in 1920 and sent them around the city selling ice cream. Grocery stores didn’t start selling ice cream until the 1930’s. Ice cream was great for troop morale, and in 1943, the U.S. Armed Forces were the world’s largest ice cream manufacturers. Early ice cream vans carried simple ice cream, during a time when most families did not own a freezer. Many were small operator businesses. As freezers became more commonplace, ice cream vans moved towards selling novelty ice cream items including cream sickles, fudge sickles, revels and popsicles. Early vans used relatively primitive techniques: their refrigeration was ensured by large blocks of dry ice so the engine was always turned off when the van was stopped for sales. Ice cream vans and trucks became more commonplace in the 1950’s. They usually stopped briefly before moving on to the next street. Children, youth and parents could often be seen running after an ice cream van or truck trying to get the attention of the ice cream man, driving the van, to stop and make a sale. Ice cream vans and trucks in the 1950’s and 60’s were the sound of summer: a string of jangly notes cutting through the summer air. At the sound of the familiar music,  mouths began to water. Parents reached for their wallets. Children laced up their shoes and hit the pavement. The ice cream truck was coming. In addition to ice cream bars, an ice cream van or truck often also had ice cream cones for sale. Typical flavors on hand in the 50’s and 60’s in Vancouver included chocolate, strawberry, vanilla, maple walnut, orange and neapolitan.

The original members left the Tornados in 1965 and were replaced by new musicians. In 1966 The Tornados released their fourteenth and final single called “Is That a Ship I Hear?” The B-side was “Do You Come Here Often?” It was the first openly “gay” themed pop record to be released by a major UK record label, in this case Columbia Records. The tune begins why the trademark organ-inspired instrumental the Tornados were known for. But producer Joe Meek felt the organ playing was too jazz-influenced for the bands fans. Two-thirds of the way into the tune about 2:25, a laid-back chat between what appears to be two gay men was overdubbed. The newer line-up of Tornados bandmates who were doing the voice parts were keyboard player Dave Watts playing and guitar player Rob Gale.

The “pirate ships” were radio stations that operated off the coast of England. They began in the early 60’s to circumvent the record companies’ control of popular music broadcasting in the United Kingdom and the BBC’s radio broadcasting monopoly. And “see you down the ‘Dilly” likely referred to the Piccadilly area of London, the center of much gay life at the time. In 1966 homosexuality was “illegal” in the United Kingdom and was partially decriminalized in 1967. So for those willing to sit through the innocuous first two minutes of the instrumental part of the tune, the final bit was quite racy. In 2006 “Do You Come Here Often?” was featured, along with other gay-flavoured releases, on a 2006 compilation CD, Queer Noises. Producer Joe Meek was what was at the time called a closeted homosexual and struggling with the toll of criminalized same-sex attraction. He had been sent to jail on a charge of cottaging, (meeting another man in a public lavatory) in 1963. It would seem the Tornados producer wanted to get a bit of “homosexual” sub-culture on record.

After Clem Cattini left the Tornados in 1965 he went on to play as a session drummer on many #1 hits in the UK and internationally. These include “You Really Got Me” (The Kinks), “The Sun Ain’t Gonna Shine Anymore” (The Walker Brothers), “You Don’t Have To Say You Love Me” (Dusty Springfield), “Out Of Time” (Chris Farlowe), “Release Me” (Engelbert Humperndinck), “Ballad Of Bonnie And Clyde” (Georgie Fame),”Hurdy Gurdy Man” (Donovan), “Get It On” (T. Rex) and “When Will I See You Again” (The Three Degrees).

George Bellamy worked as a session musician after leaving The Tornados in 1965 working with people like Burt Bacharach and George Martin. He was part of the Tornados reunion tour in 1975, that also had Billy Fury and Marty Wilde as headliners. He retired to Costa Blanca, south of Alicante, Spain, in 2004 and formed the rock band Freeway. He currently is part of a band called The Lyrics based in Devon, UK.

Alan Caddy was lead guitarist with Johnny Kid & The Pirates, along with bandmate Clem Cattini, before his three years with The Tornados. Caddy later worked as music director and arranger for Polydor Records and then became a producer for the Fontana Records. While with Fontana he arranged recordings for Dave Dee, Dozy, Beaky, Mick & Tich. He played as a session guitarist for the Spencer Davis Group, Kiki Dee, the Pretty Things and Dusty Springfield. An alcoholic most of his adult life, Caddy died in 2000 at the age of 60.

Heinz Burt was born in Germany in 1942. After leaving The Tornados part way through 1963 at Joe Meek’s encouragement to be a solo start, he was featured alongside Gene Vincent in the ’63 rock ‘n roll film Live It Up! Also in that film was Steve Marriott who would go on to form the Small Faces. He starred in a 1976 film called Teeth n’ Smiles as a dim-witted would-be pop star. Heinz continued to perform on bass guitar, until two weeks before his death at the age of 57 from a stroke in 2000.

Tornados producer, Joe Meek, wrote “Telstar” and eleven of the sides for their fourteen single releases in the UK. Prior to forming the Tornados, Meek had produced the number one UK hit for John Leyton, “Johnny Remember Me” in 1960. In 1964 he produced “Have I The Right?” by The Honeycombs. Meek also worked with Tom Jones, Petula Clark and Gene Vincent. After “Telstar” became a hit Meek was involved in a plagiarism lawsuit initiated by French composer Jean Ledrut. As a consequence Meek never received any royalties from the number one hit. The lawsuit was ruled in his favor three weeks after he died in 1967. His finances were in a shambles and on February 3, 1967, he killed his landlady, Violet Shenton, and then turned the gun on himself. The BBC aired a documentary in 1991 titled The Very Strange Story of… the Legendary Joe Meek. In 1994 the BBC aired a radio play called Lonely Joe. And in 2005 a stage play, Telstar, about the life of Joe Meek, toured England and had a run at the New Ambassadors Theatre in London.