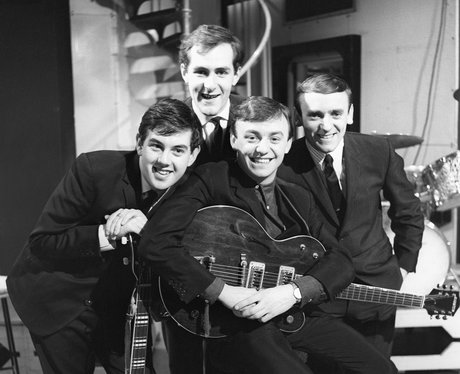 In September 1942, Gerry Marsden was born in Liverpool, UK. His interest in music began at an early age. During World War II Marsden recalls standing on top of an air raid shelter singing “Ragtime Cowboy Joe”. Passers by applauded. Gerry and Fred Marsden’s father was a railway clerk who entertained the neighbours by playing the ukulele. With the vogue for skiffle music in the mid-’50s, he took the skin off one of his instruments, put it over a tin of Quality Street and said to Freddie, “There’s your first snare drum, son.” Gerry sang in a church choir by the age of twelve. In 1957 the brothers appeared in the show Dublin To Dingle at the Pavilion Theatre in Lodge Lane. Studies meant little to either of them. Freddie left school and worked for a candle-maker earning £4 a week, and Gerry’s job was as a delivery boy for the railways. Their parents did not mind and encouraged their musical ambitions. Marsden formed the group in the late ’50s, calling themselves, The Mars-Bars, a nod to the Mars Bar candy bar and the first syllable of Marsden’s surname. The band consisted of Marsden as frontman and guitarist, Fred Marsden on drums, Les Chadwick on bass, and Arthur Mack on piano. The latter left in ’61 to be replaced by Les McGuire (who also played saxophone).

In 1961, The Beatles and Gerry & the Pacemakers merged to become the Beatmakers, for a one-off performance in Litherland Town Hall. The line-up comprised Gerry Marsden, George Harrison, Paul McCartney, John Lennon, Les Chadwick, Pete Best, Freddy Marsden and Les Maguire, plus vocalist Karl Terry from the local Liverpool band The Cruisers. In Liverpool in the early 60s they were as popular as the Beatles. Beatles manager, Brian Epstein, signed up the band with EMI/Columbia Records and they released their first single in ’63 called “How Do You Do It?” The song had been offered to the Beatles who also recorded the tune. However, the Beatles didn’t consider the song in keeping with their emerging sound and objected to releasing it as a single. The Pacemakers sound was bouncy, catchy and memorable. They mostly recorded upbeat tunes, though three of their biggest hits were ballads.

Their guitar-dominated pop got Gerry And The Pacemakers a second #1 hit in the UK called “I Like It” in June ’63, written by Mitch Murray. Their third UK #1 hit was in September ’63 with the pop ballad “You’ll Never Walk Alone.” 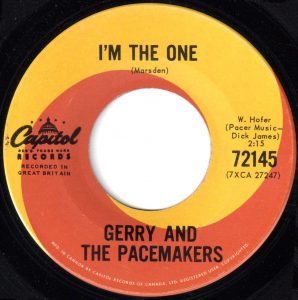 “I’m The One” is a song of devotion credited to Gerry Marsden. In it he professes to the love of his life “you’re the reason I’m livin’.” He pleads that, given his dedication to “always be with you,” that they “don’t break my heart in two.” In an article on the Power of Positivity website titled “10 Signs You’re In Love With The Right Person,” here are some things for the person Marsden is singing to consider. The article lists ten factors that are indicators that there is a good fit. They include:

1) They are the best part of your day. When you are together life is just that much sweeter, brighter, better.
2) You worry often. You are protective of their health and safety, worry when they go on a trip etc. Underlying this worry is apprehension that anything like an accident should befall your lover.
3) You’re always touching them. Taps on the arm in the check-out counter, public displays of affection… It seems whenever you’re together your body moves toward them to touch and be touched.
4) You feel their pain. When they have bad news, it also impacts you. You have empathy to the max.
5) You’re ready to pick a fight. If someone says something to insult your partner, you are ready to go teach that person a lesson.
6) You think about the future. Imagining ways to integrate your life, more and more, with your partner excites and is alluring.
7) You want to be a better person. The company you are keeping inspires you to take bolder steps to be the best you can be, not only with each other, but in the wider world.

On the EP for “I’m The One”, the liner notes exclaimed “See the Cinema-sized grin. Listen to the flashing guitars and compelling percussion. Wonder at all the energy put into the performance. Feel the excitement of a completely new, completely different vocal/instrumental sound. Hear the all-but-honky-tonk piano driving extra vitality into the finished product. See these things, hear these things, and you are taking in the infectious enjoyment of a session starring Gerry and the Pacemakers. The pop scene may be teaming with beat combos, but very few of them look as though they’ll ever manage to match the international popularity of Gerry Marsden and his power-packed Pacemakers. Certainly, not one other hit parade attraction – British or American – can ever better the astonishing achievement of this great group in enjoying three consecutive Number One hits with three initial recordings in less than nine months!

In 1964, Gerry and The Pacemakers have set their sights upon even greater targets. Their visit to America for appearances on the internationally famous Ed Sullivan television show, their trip to Australia and New Zealand where Pacemaker platters have topped the pops with maximum regularity, and the news of the group’s first motion picture, indicate that Gerry and The Pacemakers will continue to conquer wide new sections of the entertainment world before the end of the year.

Gerry Marsden wrote a lot of the Pacemaker’s tunes. These included the following hits: “It’s All Right”, “I’m The One”, “Don’t Let The Sun Catch You Cryin’” and “Ferry Cross The Mersey”. The latter two singles were international hits. Like the Beatles, Gerry And the Pacemakers got to star in their own film. The group were featured on scooters for the film Ferry Cross The Mersey(1965), which was written by the creator of Coronation Street, Tony Warren. Although the plot is trite, the film offers invaluable views of Merseyside sights and clubs of the ’60s. In 1965, Gerry And The Pacemakers had five songs on the Vancouver AM pop charts spanning 34 weeks. One of these was “Give All Your Love To Me“. In 1966 the group had their last American Top 40 hit, “Girl On A Swing.” In 1968 Gerry Marsden replaced Joe Brown in London’s West End musical Charlie Girl, and effectively broke up the group.

Pacemaker drummer, Freddie Marsden, became a telephone operator for £14 a week but later opened the Pacemaker driving school in Formby. Although he was always courteous to his fans, he never returned to music and got rid of his drum set. In 1973, Pacemaker bass guitarist Les Chadwick moved to Sydney, Australia, where he set up an employment agency. Les Maguire briefly fronted the Mississippi blues band, Hog Owl in 1970, and later teamed up with the Pacemakers for occasional reunion performances. In 1989 Gerry Marsden was featured along with Paul McCartney, Holly Johnson (of Frankie Goes to Hollywood) and the UK band the Christians, in a charity release of “Ferry Cross The Mersey”.

At the Hillsborough Football Stadium on April 15, 1989, 96 soccer fans were crushed and died, and another 766 fans were injured. The 1989 single release of “Ferry Cross the Mersy” spent three weeks on the top of the UK singles chart from May 20th to June 3. The Pacemakers  1963 hit “You’ll Never Walk Alone” is the anthem for the Liverpool soccer team (and it’s fans). Subsequently, the Pacemakers cover of the song has been adopted by the Scottish Football (soccer in North America) team Celtic. It has also been adopted by three soccer teams in the Netherlands, ten German soccer teams, and teams in Belgium, Japan, Spain and New Zealand. In 1993 Gerry Marsden published his biography, I’ll Never Walk Alone.

Gerry Marsden toured as far away as Australia in 2014. In 2017, Gerry And The Pacemakers performed in 46 concerts across the UK. In 2018, they performed three times in March and on April 22 at the Grove Theatre in Dunstable, UK. At this time of writing, Gerry Marsden is 77 years old.