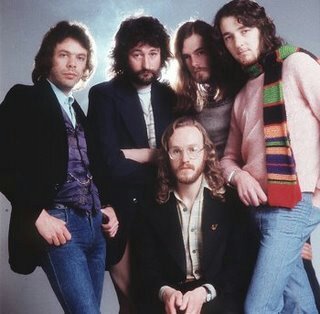 Richard “Rick” Davies was born in 1944 in Swindon, England. By the age of eight, it was clear his only real interest in school was music. At the age of 12 he became a snare drummer with the British Railways Staff Association Brass and Silver Jubilee Band. Davies recalls, “As a kid, I used to hear the drums marching along the street in England, in my home town, when there was some kind of parade, and it was the most fantastic sound to me. Then, eventually, I got some drums and I took lessons. I was serious about it… I figured if I could do that – I mean a real drummer, read music and play with big bands, rock bands, classical, Latin, and know what I was going to do – I would be in demand and my life was set… Eventually, I started fiddling with the keyboards, and that seemed to go over better than my drumming, for some reason. So you’ve gotta go with what people react to.”

At the age of 15, he joined a band in 1959 named Vince and the Vigilantes. In 1962, Rick Davies formed his own band called Rick’s Blues, playing the electric piano. His drummer was Gilbert O’Sullivan, who later had pop hits “Alone Again, Naturally”, “Claire” and “Get Down”. In the mid-60s, Rick Davies formed The Lonely Ones who changed their name to The Joint. The band made tracks for a number of German films. At this time, Davies met Dutch millionaire Stanley August Miesegaes, who offered to fund him if he started a new group. An ad was placed in Melody Maker, and Roger Hodgson successfully auditioned.

Roger Hodgson was born in 1950 in Portsmouth, on the south coast of England. When his parents divorced when he was 12-years-old, his Dad gave him a guitar. At the end of boarding school, Hodgson became a guitar player for People Like Us. In the late 60s, he joined Argosy, which included musician Reginald Dwight (later known as Elton John).

Initially named Daddy, the band was subsequently called Supertramp.  The band went through a number of lineup changes in the initial years, with Dougie (pronounced “Doogie”) Thompson joining in 1972. Born in Glasgow in 1951, Dougie Thompson learned to play bass guitar. He was in the Alan Bown Set, along with saxophonist and occasional woodwind musician John Helliwell. The Alan Bown Set also featured a young vocalist named Robert Palmer. Born in 1945 in Yorkshire, John Helliwell was persuaded by Thompson to leave the Alan Bown Set and join Supertramp in 1973. A fifth mainstay of the classic Supertramp lineup, Bob Siebenberg, joined the band in 1973. Robert “Bob” Layne Siebenberg was born in Glendale, California, in 1949. Siebenberg was a successful audition after Kevin Curie left the band.

Supertramp went back to the recording studio and in 1977 released Even in the Quietest Moments… The album’s lead single’ “Give A Little Bit”, climbed to #2 in the pop charts in the Netherlands, #4 in South Africa, #9 in Norway and #15 on the Billboard Hot 100. In Vancouver (BC), the single climbed to #2. And on April 22, 1977, the band performed in Vancouver at the Pacific Coliseum. 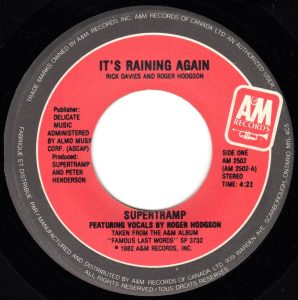 “It’s Raining Again” is a song about a guy who had lost a friend, whose relationship is at an end. It’s said that as you get older, a break-up gets easier “to walk away.” Still, only time heals the pain. He summons some self-talk to get back in the game: “come on you little fighter.” “It’s Raining Again” was written by Supertramp bandmates Rick Davies and Roger Hodgson.

The end of the song is a quote from an old English nursery rhyme from the Mother Goose collection: “It’s raining, it’s pouring, the old man is snoring. He went to bed, and bumped his head, and he couldn’t get up in the morning.” It has been suggested that the verse is a “classic description” of a head injury (“bumped his head”), followed by a lucid interval and an inability to resume normal activity (“didn’t get up in the morning”). Andrew Kaye in Essential Neurosurgery suggested that, in regard to the first verse at least, the rhyme is an interpretation of an accidental death (“didn’t get up in the morning”; indicating that no attempt or ability to get up was made). Any collection of Mother Goose rhymes draws heavily upon rhymes that originated as early as the years of the Black Plague in England, especially 1665. Babies fall out of their cradles. London Bridge falls down, and a lady gets locked up as a result. Three Blind Mice get their tails cut off. The list goes on and on. It’s Raining It’s Pouring seems to belong to that era just because its lyrics have a similar mournful ending.

Internationally, “It’s Raining Again” peaked at #1 in France, #2 in Switzerland, #3 in Germany, #4 in Canada, #6 in the Netherlands, Norway and South Africa, #7 in Austria, and #11 in Australia and the United States.

“It’s Raining Again” was from Supertramp’s seventh studio album, …Famous Last Words… This was the last album with Roger Hodgson, before he left the band. On September 3, 1983, the band played at the BC Place Stadium in Vancouver.

In 1985, Supertramp released the album Brother Where Are You Bound. It became a Top Ten album seller in the France, the Netherlands, Norway, Spain, Sweden, Switzerland and West Germany. That year, on November 17, Supertramp gave a concert in Vancouver at the Pacific Coliseum. In 1988 the band split up.

In 1996, Supertramp reformed with a new lineup. It included former members from the classic lineup: Davies, Helliwell, and Siebenberg, along with Mark Hart on guitar, keyboards and vocals; Carl Verheyen on guitar; Cliff Hugo on bass guitar; Tom Walsh on percussion and Lee Thornburg on horns. Now, Supertramp was an eight-man band. They released an album titled Some Things Never Change. On August 8, 1997, Supertramp returned to Vancouver to perform at General Motors Place.

In 2002 the band released Slow Motion. Supertramp appeared in concert in Vancouver on September 16, 2002, at the Pacific Coliseum. The band was dormant for the next six years, but began to tour again in 2009. On June 2, 2011, they played at Rogers Arena. Aside from a 25-city tour of Europe in the mid-2010s, Supertramp has been less active as a band.