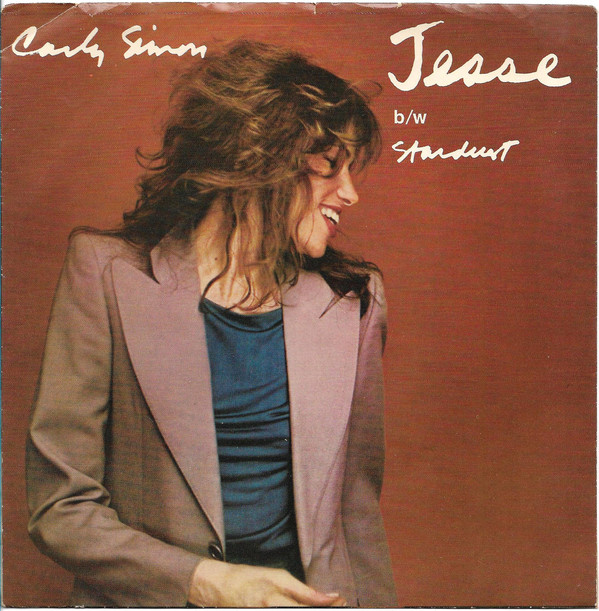 Carly Elisabeth Simon was born in 1945 in The Bronx. Her father was from a German-Jewish family, and her mother was from a German family. In 1964, with her sister Lucy, she formed the Simon Sisters. They had a minor folk-pop hit with the nursery rhyme – lullaby “Winkin’, Blinkin’ and Nod”. It was a Top 50 hit in Vancouver (BC) in April ’64. The Simon Sisters released three albums between 1964 and 1969 in the folk and children’s folk genres. This included recordings of Edward Lear’s “The Owl and The Pussycat”, and Lewis Carroll’s “The Lobster Quadrille”. Lucy went on to write music for the 1991 Tony Award winning musical, The Secret Garden. In 1971 Carly Simon appeared in the film Taking Off, where she was cast as an audition singer.

In 1971 her self-titled debut album included the Top Ten hit single “That’s the Way I’ve Always Heard It Should Be”. The song earned her a nomination for a Grammy Award in the Best Pop Vocal Performance – Female. And in 1972 she won a Grammy Award for Best New Artist. This was followed by her studio album Anticipation. In early 1972, the title track peaked at #3 in Montreal, #11 in Vancouver and #13 on the Billboard Hot 100. “Anticipation” also earned Simon another Grammy nomination for Best Pop Vocal Performance – Female. A subsequent track, “Legend In Your Own Mind”, stalled at #50 on the Billboard Hot 100, but peaked at #17 in Vancouver.

In 1973 Simon released No Secrets, with the lead single “You’re So Vain”. The recorded version of the song contained three verses, each about a different man – Warren Beatty being the subject of the second verse. “You’re So Vain” climbed to #1 in the USA, Australia, Canada, New Zealand, and was a Top Ten hit in South Africa, the UK, Ireland, Belgium, West Germany and the Netherlands. The song earned Grammy nominations for both Record of the Year, Song of the Year and Best Pop Vocal Performance – Female. But those awards were won in each case by Roberta Flack for “Killing Me Softly With His Song”. A follow up single release, “The Right Thing To Do”, was a Top 20 hit in New Zealand, the UK, the USA and Canada.

From her 1974 album Hotcakes came a duet with James Taylor titled “Mockingbird” peaked at #4 in Vancouver and #5 on the Billboard Hot 100. A second single from the album “Haven’t Got Time For The Pain”, was a Top 20 hit in the USA.

Her mid-70s albums Playing Possum and Another Passenger were marginal sellers. But Simon was back in the Top Ten in 1977 with her song from the James Bond spy film The Spy Who Loved Me titled “Nobody Does It Better”. The song earned Carly Simon two more Grammy Award nominations: Song of the Year and Best Pop Vocal Performance – Female.

And in 1978 Carly Simon had another Top Ten hit with “You Belong To Me” from the album Boys in the Trees. The song earned Simon a Grammy nomination for Best Female Pop Vocal Performance. It later was included in the soundtrack for the 1985 film Desperately Seeking Susan. A subsequent track from Boys in the Trees was a duet single release with James Taylor, a cover of a 1958 Everly Brothers song “Devoted To You”. The album won a Grammy Award for Best Album Package.

In 1979 Carly Simon released her eighth studio album, Spy, based on the poetry of Anais Nin, whose quote “I am an international spy in the house of love”, is written across the top on the inside jacket. Simon was nominated for a Grammy Award for Best Rock Vocal Performance – Female for the single “Vengeance”.

Her ninth studio album, Come Upstairs, was released in 1980. The lead single from the album was “Jesse”.

“Jesse” is a song written by Carly Simon. It is told in first-person about the narrator’s disdain for her former lover, Jesse, who has just moved back to town. She vows to have nothing to do with him, “Don’t let him near me, don’t let him touch me, don’t let him please me,” she sings. She asks her friends to remind her of how he has wronged her, because she fears she’ll end up letting her guard down and fall back under his spell. She ends up going back on her promise to herself and the two rekindle their romance. “Jesse, quick come here, I won’t tell a soul”, “Jesse, that you’ve come back to me, my friends will all say ‘She’s gone again'”, she sings. She then seeks to comfort her friends because they don’t approve. “My friends, let’s comfort them, they’re feeling bad, they think I’ve sunk so low,” she sings.

In 1981 Carly Simon released an album of ‘torch songs’ titled Torch. And in 1982 she had a track on the soundtrack to the sex comedy film, Soup For One. In 1986 she had a single titled “Coming Around Again” from the film Heartburn. The song was an international Top Ten hit in Austria, Ireland, the Netherlands, Sweden and the UK. A subsequent single from her 1987 album, Coming Around Again, was “Give Me All Night” – a Top 20 hit in South Africa. A third single release, “The Stuff That Dreams Are Made Of”, was her third Billboard Top Ten Adult Contemporary Chart hit in a row. Her album Coming Around Again earned her yet another Grammy Award nomination for Best Pop Vocal Performance – Female.

In 1987 Carly Simon was nominated for a Grammy Award in the Best Recording for Children with “Itsy Bitsy Spider”.

In 1988 Carly Simon had a #11 hit on the Adult Contemporary Chart in the USA with “Let the River Run”, a track from the film Working Girl. The song won her both an Academy Award and a Golden Globe Award, each in the category for Best Original Song. And in 1990 Carly Simon released her 15th studio album, Have You Seen Me Lately. It featured the single “Better Not Tell Her”, which became her 15th Top Ten hit on the Billboard Adult Contemporary Chart.

In 1995 Carly Simon recorded a duet with Frank Sinatra: “Guess I’ll Hang My Tears Out To Dry”/”In The Wee Small Hours of the Morning”. Sinatra’s album, Duets, was nominated for a Grammy Award for Best Traditional Pop Vocal Performance. In 1997 Simon released her third album devoted to pop standards titled Film Noir. The album earned her another Grammy Award nomination, this time for Best Traditional Pop Vocal Performance.

In 2001 Janet Jackson and Carly Simon released a song titled “Son of a Gun (I Betcha Think This Song Is About You)”. Simon added some new spoken parts into the song, along with samples from “You’re So Vain”. In 2004 “You’re So Vain” was inducted into the Grammy Hall of Fame.

Her most recent album, Never Been Gone, was released in 2009. in 2015 she published Boys in the Trees: A Memoir. Over her career Carly Simon recordings have been nominated for Grammy Awards on 22 occasions. She has performed in concert almost exclusively in the United States.