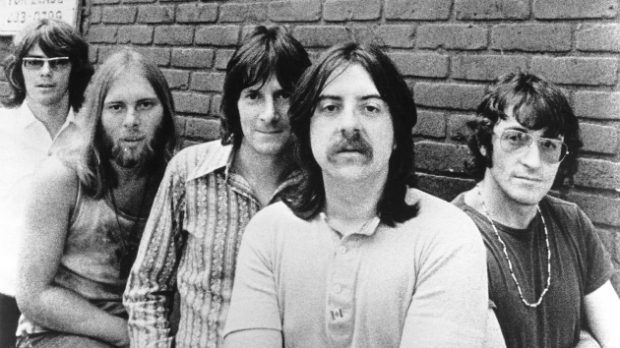 The Five Man Electrical Band was a Canadian mainstream rock band from Ottawa. They had an international hit in 1970 called “Signs.” Les Emmerson was born in 1944. In 1963 the Staccatos, an Ottawa group, was formed. It included lead singer and local disc jockey Dean Hagopian. After some local hits they got the attention of Capitol Records. When Dean Hagopian left around 1964, Les Emmerson stepped in as lead vocalist. One of their 1965 singles imitated the surfing sound with “Moved To California.” In 1966 their Top 40 hit on the Canadian RPM singles chart, “Let’s Run Away,” won the group the two Juno awards that year for Best Produced Single and Vocal Instrumental Group Of The Year.

Hagopian left the band before they released “Half Past Midnight.” The song peaked on the Canadian RPM singles chart at #8 in May 1967. It won them a JUNO award for Best Produced Single and got them gigs in the trendy music scene in the downtown Toronto neighborhood of Yorkville. Coca-Cola lined them up for some jingles and they shared one of two sides of an album in 1968 with The Guess Who called A Wild Pair.

After failing to chart in the USA the group changed their sound and their name to the The Five Man Electrical Band in 1969. At this point the band’s lineup consisted of Emmerson on vocals, Staccatos bass guitarist Brian Rading, Staccatos 2nd drummer and third vocalist Mike “Bell” Belanger, Staccatos singer and drummer Rick Bell (Belanger), and new bandmate – keyboard player Ted Gerow.

The band released a single called “It Never Rains On Maple Lane” which had regional success in Olympia, Washington, (#12), Kirkland Lake, Ontario, (#11) and Top 30 in San Francisco and Toronto. A second single, “Lovin’ Look” made it into the Top 100 in Wilkes-Barre, Pennsylvania, with the band sounding similar to the Grass Roots. But it was their third single release that began to show signs of an emerging sound the Five Man Electrical Band became known for. The refrain, “the sun is up and I’m still down” in the last minute of “Sunrise to Sunset” got the band more attention. With that more mainstream rock sound their third single peaked at #13 in Ottawa, #12 in Victoria and #12 on CKLG in Vancouver.

Several more singles followed. In 1970 the band released an album called Good-byes and Butterflies. The cover of the album prominently displayed a marijuana plant. The ensuing controversy led to the album being withdrawn and given a different cover with a butterfly composed of neon lights. One of the tracks from the album was “Signs”. It was initially the b-side of “Hello Melinda, Goodbye.” But by accident, the sides were reversed, making “Signs” the A-side, which radio listeners started began calling DJ’s for requests to hear it again. In 1971 “Signs” peaked at #3 on the Billboard Hot 100 and in Vancouver. This was followed by “Absolutely Right” which peaked at #4 in Vancouver and reached the Top 20 in the USA.

The Five Man Electrical Band followed up with “Julianna”. 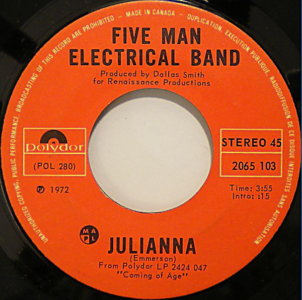 “Julianna” was written by Les Emmerson. The narrator of the song is obsessed with Julianna, and wants to hold her in his arms again. He warns her that since he thinks “about her every night,” she’d better “go home” while she has “a man” waiting there for her. The guy tells her he had a dream that where he tells someone that Julianna “belongs to me.” The guy is on the edge of wrecking a relationship in order to steal Julianna away from the relationship she’s in. Does Julianna feel the same way about him? The singer asks Julianna “Do you think you’re gonna… come on home?” It seems she is out a lot late at night. And maybe not just with the guy who is hung up about her. What does Julianna’s “man” think about her late nights? We don’t know. At some point Julianna will have to decide if she wants to focus her attention on the man in her life who she lives with, the guy who thinks about her every night (or maybe some other guys as well).

“Julianna” peaked at #4 in Vancouver (BC), #9 in Hamilton (ON), The song also charted into the Top 30 in both Jacksonville and Sarasota, Florida, and Regina (SK). It also got airplay in St. Louis, Missouri.

Several more singles were released including their 1973 single “I’m A Stranger Here,” an anthem to environmental awareness. When the single was recorded, the band was made up of Les Emmerson (vocals, guitar), Rick Bell (vocals, drums), Ted Gerow (keyboards), Mike Bell (vocals, drums) and Brian Rading (bass guitar). At the end of the albums production, Mike Bell and Brian Rading left the band, actually making the remaining members a “Three Man Electrical Band.”

The band had one more notable hit called “Werewolf” in 1974.

The Five Man Electrical Band split up in 1975. Les Emmerson based himself in California from the mid-70s until 1981. During this time he launched Perfect Records with the engineer for Bachman-Turner-Overdrive and Pure Prairie League, Mark Smith. When he moved back to Ottawa in 1981 he became associated with The Cooper Brothers, an Ottawa band with a southern rock sound. Emmerson also established  a recording studio in the nation’s capitol.

1986 was the year the Five Man Electrical Band got together to perform a benefit concert. However, the benefit concert led to yearly tours of Eastern Canada into the 2010’s. In 2000, at the age of 56, Les Emmerson suffered a heart attack. Thankfully, a stent procedure was successful. In 2008, The Canadian Songwriters Hall of Fame inducted Les Emmerson, primarily for his composition of “Signs,” a song he was first inspired to write while driving down Route 66.

Update: Les Emmerson died in December 2021 at the age of 77. See Ottawa Citizen article in reference section below for more details.