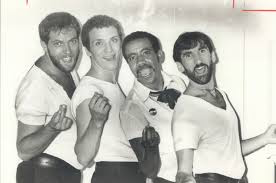 The Nylons are an a cappella group that formed in 1978, based in Toronto. The original members were all gay men: Dennis Simpson, Paul Cooper, Claude Morrison and Marc Connors. They released their self-titled album in 1982. There were some lineup changes after 1979 when Dennis Simpson left. By the time the Nylons released their first album, Arnold Robinson was the newcomer joining the other original group members. In 1986, the group appeared on the Canadian children’s TV show Sharon, Lois & Bram’s Elephant Show. The show was hosted by a trio of the entertainers and singers known as Sharon, Lois & Bram. The Nylons appeared in an episode of the TV show, Treasure Island, and sang “The Lion Sleeps Tonight”. The next year they released their fourth album, Happy Together.

On the Happy Together album The Nylons covered a song by a band named Steam from 1969 titled “Kiss Him Goodbye”. “Kiss Him Goodbye” is a song by an ex-lover, or ex-boyfriend, letting his “ex” know that the new guy they’re dating isn’t as good as him. The new man may be thrilling, but he doesn’t love as much as the last flame. As the song is being sung by The Nylons, it is as likely as possible that the person in mind who has left a guy behind for a new guy is also a male. The original hit by Steam would likely have been presumed to be a song by a guy to a lady who he used to go out with. However, the album by Steam from 1969 featured six guys sitting with towels wrapped around them, presumably in a steam bath. The album cover in 1969 would mostly have been considered naughty and not necessarily homoerotic at the time.

Steam was actually three studio musicians who got together in 1969 to record “Na Na Hey Hey Kiss Him Goodbye”. Paul Lecka wrote “Green Tambourine”, a #1 hit for The Lemon Pipers in 1968. And Gary DeCarlo had written “Working On A Groovy Thing” for the Fifth Dimension. Gary DeCarlo and the third member of Steam, Dale Frashuer, had been part of a group called The Glenwoods from Bridgeport, Connecticut. Shortly after the song became #1 on the Billboard Hot 100, Dale Frashuer stepped out of public life. Paul Lecka produced and arranged Harry Chapin’s Short Stories album and Verities & Balderdash. The latter featured his #1 hit, “Cats In The Cradle”. Lecka also wrote and arranged songs for Bobby Vee, Tommy James & The Shondells, Little Anthony & The Imperials, The Left Banke, Garry Lewis & The Playboys, Lesley Gore, The Happenings and Hugo Montenegro.

The Nylons homoerotic overtones with their live performances of “Kiss Him Goodbye” in 1987 were all part of the sexual revolution that was chugging along in the 1980’s. In the 1970’s and 1980’s there were a number of recording artists who were coming out as gay. This was a new phenomenon. One of these was Sylvester who had big dance hits in the late 70’s with “You Make Me Feel (Mighty Real)” and “Do You Want To Funk”. Marc Almond of the duo, Soft Cell, had a giant hit with “Tainted Love” in 1982. The duo’s final album was Last Night in Sodom. The lead singer for Frankie Goes To Hollywood was Holly Johnson who sang “Two Tribes” and “Relax”. There was also Jimmy Sommerville of the UK trio Bronski Beat who had the hit “Small-town Boy”. There was Andy Bell of Erasure, and three of the five members of the B-52’s: Fred Schneider, Ricky Wilson, and Keith Strickland, who sang vocals on “Rock Lobster” and other zany new wave hits. Others who came out included lead singer of the Pet Shop Boys, Neil Tennant, one half of the Duo Wham!: George Michael, Boy George, Elton John, three of The Village People: Alexander Briley (soldier) Randy Jones (cowboy) and Felipe Rose (Native American Chief). There was also Michael Stipe of R.E.M. and Freddy Mercury of Queen.

Gavin Hope, from Calgary, was just six years old in 1978. But he moved to Toronto and at the end of 1992 became a member of The Nylons at the age of 20, replacing Paul Cooper. Garth Mosbaugh also joined The Nylons, replacing Billy Newton-Davis (who had replaced Marc Connors in 1991, as Connors had died of AIDS) in 1994. Between 1982 and 2011 there were twenty-two albums released. On October 24, 1992, The Nylons sang the Canadian national anthem, “O Canada”, at Atlanta-Fulton County Stadium. The occasion was the start of the sixth game of the 1992 World Series between the Toronto Blue Jays and the Atlanta Braves. The Blue Jays went on to win the series.