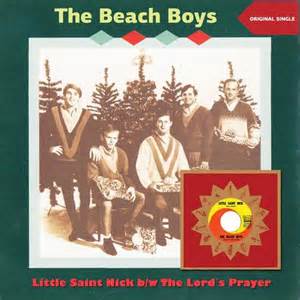 On this first Christmas Day since the Countdown began on October 3, 2016, here is a song that was a hit in Vancouver called “Little Saint Nick” by the Beach Boys. It was the CFUN Twin Pick of the week for December 7, 1963. As it only spent three weeks on the C-FUNTASTIC FIFTY, it did not chart as well as other songs on this Countdown. But it was a hit single here in Vancouver. As a song that made it onto record surveys in the USA it did well in a few radio markets in California (#9 in Los Angeles, #3 in San Bernardino and #1 in Sacramento), Seattle (#9) Salt Lake City (#5) and Boston (#10). Otherwise, the song got little airplay across the USA. For the most part, “Little Saint Nick” was a hit in December 1963 from the California coast up to Vancouver. The song was judged too cheery a tune to play on the radio in late November 1963, and December 1963, while Americans were still mourning the death of President John F. Kennedy.

Brian Wilson was born in Inglewood, California, in 1942. In biographer Peter Ames Carlin’s book, Catch a Wave: The Rise, Fall, and Redemption of the Beach Boys’, the author relates that when Brian Wilson first heard George Gershwin’s “Rhapsody in Blue” it had a huge emotional impact on him. As a youngster, Wilson learned to play a toy accordion and sang in children’s choirs. In his teens he started a group with his cousin, Mike Love and his brother, Carl. His named the group Carl and the Passions in order to convince his brother to join. They had a performance at Hawthorne High School, where they attended. Among the people in the audience was Al Jardine, another classmate. Jardine was so impressed with the performance that he let the group know. Jardine would later be enlisted, along with Dennis Wilson to form the Pendletones in 1961.

The first song Brian Wilson wrote would become “Surfer Girl”. A demo of the tune was made in February 1962 and would go on to be a Top Ten hit when it was released a year later in 1963. However, their first recording was a doo-wop-surf tune called “Surfin’” in October 1961. It was released in November ’61 on the Candix Enterprises Inc. label. The surprise for the group was that the record label had changed the group’s name from the Pendletones to the Beach Boys. Consequently, as each time the record was played by a DJ in America, radio listeners were being introduced to the Beach Boys. The name Pendletones was now history.

In the fall of 1963 record producer Phil Spector was planning to record a Christmas album of pop tunes by his pop music recording acts. These included “Sleigh Ride” and “Frosty the Snowman” by The Ronettes, “Winter Wonderland” by Darlene Love and “Santa Claus is Coming to Town” by The Crystals. The album, A Christmas Gift for You from Phil Spector was released in the USA on November 22, 1963, the day President John F. Kennedy was assassinated. With the nation reeling from shock, fear and grief, Americans and their media were in mourning. The cheery Christmas songs by the recording artists in Phil Spectors stable were not what America wanted to hear just then, although the tunes have over the decades become seasonal sellers.

Upon hearing of Spector’s plans, Brian Wilson of the Beach Boys got an inspiration that would a year later result in the Beach Boys seventh studio album called The Beach Boys’ Christmas Album released on November 9, 1964. Wilson recalled years later about “Little Saint Nick”, “I wrote the lyrics to it while I was out on a date and then I rushed home to finish the music.” Though “Little Saint Nick” was initially credited to Wilson alone, in 1990 fellow group member Mike Love won a lawsuit crediting him as co-writer of the tune. The songs’ structure and rhythm was drawn from the groups summer 1963 hit “Little Deuce Coupe”. The Beach Boys give us the background story to how it was plausible that Santa could be so very fast with his sleigh ride each year on Christmas Eve. In their song the little Saint Nick is actually the bobsled that Santa Claus spends all year driving around like a hot rod. It is candy apple red and has a ski for a wheel. According to the song, Santa is something else to watch when he hits the gas of this bobsled. Santa had 364 days of revving up his Little Saint Nick bobsled to get ready for his much anticipated sleigh ride. It is no wonder, then, that Santa made good time with all the chimneys and households in the world to visit in order to deposit toys to the nice girls and boys in one single night.  In this respect “Little Saint Nick” may be uniquely the only hot rod Christmas song. It was the follow-up single to “Be True To Your School” and “Little Saint Nick” was the seventh single release by the Beach Boys since they first debuted on the pop charts in the fall of 1962 with “Surfin’ Safari”.

In fact, the Beach Boys were getting more Top Ten songs in Vancouver than on the national Billboard Hot 100 in the USA. South of the border the Beach Boys had scored three Top Ten hits between May and December of 1963. These were “Surfin’ USA” (#3 Billboard/#6 Vancouver), “Surfer Girl” (#7 Billboard/#8 Vancouver) and “Be True to Your School” (#6 Billboard/did not chart in Vancouver). That’s right, “Be True to Your School” was not on the pop charts in Vancouver in 1963 (or any year after). Conversely, “Little Saint Nick” made it onto the pop charts in Vancouver. Although Canadians were impacted by the news of the assassination of JFK, radio station programmers here in Vancouver chose to program “Little Saint Nick” on the play list, while many American DJ’s chose to give the song a pass (with the primary exception of radio stations in the Beach Boys home state of California).

When The Beach Boys’ Christmas Album did get released in November 1964 there was a hit single that went to #3 in December on the Billboard Hot 100. But it wasn’t “Little Saint Nick”. Instead, it was another track on the album called “The Man With All The Toys”, which didn’t chart in Vancouver.

The Beach Boys charted 13 Top Ten hits into the Billboard Hot 100 in the ’60’s. This began with “Surfin’ USA” in 1963. The only American pop group in the 1960’s who had more songs chart into the Top Ten on the Billboard Hot 100 was The Supremes, who had 18 singles reach that threshold. Though, in Vancouver, The Beach Boys had 23 songs chart into the Top Ten while The Supremes charted 18 songs into the Top Ten in Vancouver on either CKLG or CFUN, making The Beach Boys the top charting American band in Vancouver during the decade. They have had four singles (“Good Vibrations”, “California Girls”, “In My Room” and “I Get Around”) and one album, Pet Sounds, inducted into the Grammy Hall of Fame between 1994 and 2017. Between November 2, 2017, and June 8, 2018, The Beach Boys have scheduled 49 concert dates across fifteen states.