Opus recorded their first album, Daydreams, in 1980. In 1982 their single “Flyin’ High” climbed to #5 in Austria and Switzerland. Between 1982 and 1984 they released Eleven, Opusition, and Up and Down. But it was their fifth album, Live Is Life, which gave them international exposure. Their title track, “Live Is Life” was recorded in 1984 and released in 1985. 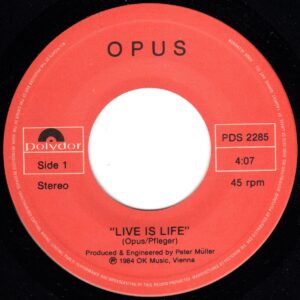 “Live Is Life” was cowritten by five members of Opus. The song is about a melding of feelings/oneness experienced by a band on stage and its audience. There is a “power” in the vibration felt in the concert venue as everyone in the audience stands up and dances. And as the band does its best to perform and give their best, people looking back on what will be a “memory of the past,” will recall how the energy of that concert kept extending itself until the final song was over.

Internationally, “Live Is Life” climbed to #1 in Austria, Canada, France, Spain, Sweden, and West Germany. It also peaked at #2 in Belgium, Norway, South Africa and Switzerland, #3 in the Netherlands, #4 in Ireland, and #6 in the UK. But in the USA it stalled at #32 on the Billboard Hot 100.

Opus released seven more studio albums between 1985 and 2004. They have also released several compilation albums over the past decade.

Ewald Pfleger told Athens Calling in a January 2021 interview “When we started the band, we dreamed about having an international hit song, so we reached this goal and are very happy and proud about it! But we never expected that this success could last for so long…:-) In addition we also made 16 albums and wrote hundreds of other titles!” Pfleger remembers the first album he ever bought was a Doobie Brothers album.

Over their career Opus has appeared in concert in Austria, Belgium, Bulgaria, Germany, Venezuela, the United States, Hungary, Italy, Norway, Portugal, Chile and in 1986 in Montreal, Canada. The current musicians in Opus consist of four members from the classic lineup: Herwig Rüdisser, Ewald Pfleger, Kurt-Rene Plisnier and Günter Grasmuck.