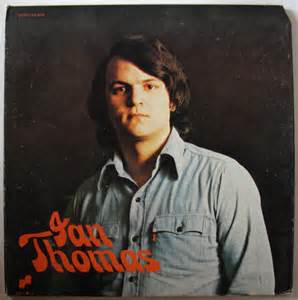 In 1950, Ian Thomas was born in Hamilton, Ontario. Once he began to play piano at the age of six Thomas fell in love with the world of music. He later learned the guitar. By 1969 he was in a folk group called Tranquility Base which began to tour across Canada. They had a #3 hit in Hamilton in 1970 called “If You’re Looking”. This led to an album, but further success eluded them. Thomas became a producer at the CBC. By 1973 he got his own record deal with GRT Records and released “Painted Ladies”. The song climbed to #9 in Vancouver and #34 on the Billboard Hot 100. His self-titled album went Gold. Thomas won the 1974 Juno Award for Most Promising Male Vocalist and toured with April Wine. He got exposure on a number of TV variety shows in Canada which included both his musical and comedic talents.

In 1974 Ian Thomas released his second album, Long Long Way. The title track from the album climbed to #17 in Vancouver. However, unlike his previous Top 40 success in the USA, “Long Long Way” became the first of twenty-five single releases to fail to crack the Billboard Hot 100. Oh it’s just like the twenties,
machine guns were plenty,
everyday you’d get shot up
all the whisky’d get bought up.
We’d be dancing the night through,
just waiting until,
the joke’s on you,
ah then what do you do.

Model T’s and Chevies
just loaded with heavies,
shining faces like morning roses,
aglow with their noses,
pressed on your window,
just waiting to shine,
your concrete shoes,
to the piano roll blues.

We’re flying space ships round the stars,
getting faster by the hour.
Pretty soon we’ll be on Mars,
build another Ivory tower,
through all the praise that you borrow,
there’s still hunger and sorrow,
and after it’s all said and done.
Though we’ve come a long long way
this old world’s not much better than it was.

Oh it’s just like the twenties,
machine guns were plenty.
Everyday you’d get shot up
all the whisky’d get bought up
We’d be dancing the night through,
just waiting until
The joke’s on you,
ah then what do you do.

Oh Model T’s and Chevies
just loaded with heavies
Shining faces like morning roses,
aglow with their noses
Pressed on your window,
just waiting to shine
Your concrete shoes,
to the piano roll blues.

“Long Long Way” is a song that dissents from the optimistic view that things are getting better and better. Though we can communicate in more sophisticated ways, get smarter, send satellites and shuttles into space, problems persist. There are still too many people around the world who go to bed at night suffering from malnutrition. There’s still a lot of crime, people buying guns and committing murder. Back in the Twenties mobs like Al Capone’s in Chicago bumped people off by putting on cement shoes on the murder victim. This involved weighting down the victim (who may be dead or alive) with concrete and throwing them into the water, hoping the body would never be found. Similar methods of bumping off people persist today, Ian Thomas’ song advises.

From a sales perspective, it’s a harder sell to get a song on the radio that laments the lack of human progress in dealing with the troubles of this world. Since the Age of Enlightenment in Europe in the 18th Century, the idea of progress in Western thought has included faith in the nobility of Western civilization; The worth of economic and technological growth; And faith in reason, and the scientific and scholarly knowledge obtained through reason. Ian Thomas’ “Long Long Way” was questioning the hubris regarding the idea of progress. He concludes “this old world’s not much better than it was.”

While “Long Long Way” was on the charts in August and September 1974, America was going through a political crisis. Richard M. Nixon had resigned from the presidency on August 9, 1974, due to the Watergate scandal.  Nixon’s resignation had not put an end to the desire among many American citizens to see him punished. The new president, Gerald Ford, considered a pardon of Nixon, though it would be unpopular in the country. Nixon, contacted by Ford emissaries, was initially reluctant to accept the pardon, but then agreed to do so. Ford, however, insisted on a statement of contrition. Nixon felt he had not committed any crimes and should not have to issue such a document. Ford eventually agreed, and on September 8, 1974, he granted Nixon a “full, free, and absolute pardon”, which ended any possibility of an indictment. Nixon then released a statement: I was wrong in not acting more decisively and more forthrightly in dealing with Watergate, particularly when it reached the stage of judicial proceedings and grew from a political scandal into a national tragedy. No words can describe the depth of my regret and pain at the anguish my mistakes over Watergate have caused the nation and the presidency, a nation I so deeply love, and an institution I so greatly respect.

With all of the political fallout, Americans were not in an introspective mood. When they turned on the radio, if they wanted a song about the past, they wanted it to be a nostalgic tale. The group Paper Lace came to the rescue with their number one hit on the Billboard Hot 100 called “The Night Chicago Died”. Paper Lace’s lyrics about Al Capone’s gang fighting cops in Chicago was a nostalgic tale from America’s past listeners in the ‘States could enjoy without having to reflect on the “progress of man.” Paper Lace invited listeners to imagine what it might have been like to have a dad who was a cop in Chicago fighting Al Capone’s gang: “Daddy was a cop on the east side of Chicago/Back in the U.S.A. back in the bad old days.” Then, on the pivotal night when the mafia and the cops are having a shootout, the singer sings:

With its happy ending, “The Night Chicago Died” rocketed to #1, while “Long Long Way”, with its introspective tone was given a pass in the USA.

Ian Thomas’  third album called Delights was released in 1975 to praise from the music critics, though the singles “Julie” and “The Good Life” were minor hits. Still, the album became a Gold record in Canada. Then in 1976 Thomas’ fourth album, Calabash, got him back on the radar in Vancouver with the hit singles “Liars” and “Right Before Your Eyes“. That year he also went on an extended tour across North America and Western Europe.

In 1979 his label, GRT, declared bankruptcy. The timing was bad as his album, Still Here, had recently been released. A “Best of” album came out the next year when he was signed to Anthem Records. His album, The Runner, became his fifth gold album. Into 1980-81 Ian Thomas toured extensively. He made a guest appearance on SCTV in one of Bob & Doug MacKenzie’s Great White North spots in 1981. His brother, Doug Thomas, played the fictional character Doug MacKenzie in the Great White North. Ian Thomas scored the theme song and co-produced The Hoser movie Strange Brew the same year. In 1984 Ian Thomas released another album, Riders On Dark Horses. He toured in Australia, Germany and England. His next album was in 1985 called Add Water. His final solo album release was in 1988 called Levity.

Through the 1990’s Thomas was part of the band called The Boomers. Numbers of Ian Thomas’ songs have been covered by other recording artists. America recorded “Right Before Your Eyes” and it climbed into the Top 50 in the USA in 1982. Anne Murray covered “Good Again”, Santana recorded “Hold On”, Manfred Mann did their own version of “The Runner” and Bette Midler released “To Comfort You”.

He has written two books, the Canadian Best Seller Bequest in 2006, and The Lost Chord in 2008. Thomas has also featured in sitcom The Red Green Show as Dougie Franklin who hangs out at The Possum Lodge.