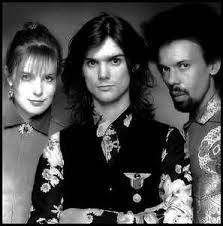 #765: The Love Parade by The Dream Academy

The Dream Academy were a folk rock and new wave group from London, England. They formed in 1983 with their membership consisting of Nick Laird-Clowes on vocals and guitar, Kate St. John on oboe, accordion, saxophone, piano and cor anglais (English horn) and Gilbert Gabriel on piano and clarinet. David Gilmour, a member of Pink Floyd, produced the Dream Academy’s first two albums. They had a Top Ten hit in 1985 called “Life in a Northern Town”. It was an ethereal tune with images of Salvation Army Band’s children drinking lemonade, mornings lasting all day, of rain and going to a railway station. There are references as well to the winter of 1963, John F. Kennedy and The Beatles.

Their debut album, Dream Academy, produced by David Gilmour, prompted the release of four singles. The first was “Life In  A Northern Town”. “The Love Parade” was the final single from this album. The song concerned couples married for a long time that are lonely when they are together. Other verses paint a picture of a man who sees a woman. “And when it’s done you put your world back on/’Cause she’s otherwise engaged, married to someone…” In the song guys fall for sweet talk and a “pocket full of kisses.” The song peaked at #36 on the Billboard Hot 100. The best chart run in the USA was in Buffalo at #5. Otherwise, the single failed to crack to Top 30 in most radio markets. However, north of the USA-Canada border, “The Love Parade” climbed to #7 in Vancouver.

“The Love Parade” is only for “matinees.” The song takes a skeptical view of the couples on parade on the sidewalks of town. Scratch the surface and you find deception and affairs. In a 2016 article in Cosmopolitan Magazine, “7 Signs You’re In A Lonely Relationship,” seven culprits are identified as the most likely reasons why two people in a couple are lonely together. Written from a female perspective they are identified as follows:
1. Your Partner Has Trouble Being Affectionate With You.
2. Your Feel Like Your Partner Judges You.
3. You Can’t Connect Because One Or Both Of You Are Overworked And Overwhelmed.
4. Your Partner Shuts Down During Arguments.
5. Your Partner Has Stopped Talking To You
6. You Aren’t Being Your True Self With Him.
7. You’re Protecting Yourself From The Hurt Of A Previous Relationship.

In each case, there are ways to potentially turn things around. The starting point is always having a conversation. With the list as presented, the trick would be to find a way to have a conversation that doesn’t result in an argument. Establishing ground rules for healthy communication might include the need to seek couple counseling or take some course for couples to expand your skill set while have conversations.

While “The Love Parade” was in the Top Ten in Vancouver, a film was released directed by John Hughes titled Ferris Bueller’s Day Off. One of the scenes in the film find Ferris Bueller (Matthew Broderick), his buddy Cameron Frye (Alan Ruck) and his girlfriend, Sloane Peterson (Mia Sara) at a museum in Chicago. During the art scene while the trio take in the exhibit, an instrumental version of “Please, Please Let Me Get What I Want”, by the Dream Academy is background music. A ballad by the Dream Academy, “The Edge Of Forever”, also was featured in the film. The soundtrack to the 1986 film was only made available for the first time through La-La Land Records in 2016. A second album, Remembrance Days, offered up a single titled “Indian Summer”. That song made the Top 20 in Ypsilanti, Michigan, in December 1987. A third album, A Different Kind of Weather, was released in 1990, but failed to catch on commercially.

There were tensions in the trio, roles they had fallen into, which Nick Laird-Clowes says weren’t healthy for their capacity to collaborate. After the trio split up in 1991 Laird-Clowes wrote lyrics for two tracks, “Poles Apart” and “Take it Back”, on The Division Bell, a multi-million selling album by Pink Floyd in 1994. Over the years he has worked with Brian Wilson of the Beach Boys, Lindsay Buckingham of Fleetwood Mac and Marc Bolan of T. Rex. Kate St. John performed with Van Morrision for many years and has also been a musical director for Marianne Faithfull. On her webpage she writes, “In January 2017, I arranged 9 songs for Laura Marling and the BBC Scottish Symphony Orchestra for the opening night of Celtic Connections in Glasgow.” Gilbert Gabriel has focused on producing music for film and TV in England and Poland. He has lectured on film and soundtrack at a number of English universities. In 2014, he launched the release of a Dream Academy compilation album, The Morning Lasted All Day, and tour.