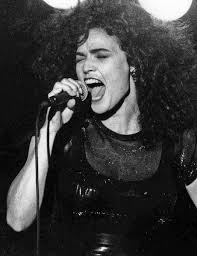 Alannah Byles was born in Toronto in 1958. She rode horses in the Royal Winter Fair by the age of twelve. At age nine she began to play musical instruments and write songs. She performed some songs at a Kiwanis Music Festival in Toronto when she was twelve. Later, in her teens, she formed a band and began to perform in concert by her late teens. At the age of 19, she changed her surname from Byles to Myles. In 1984, she made a guest appearance in the Canadian TV show, “The Kids of Degrassi Street.” Her role was a single mom who wanted to become a singer. In 1989, Alannah Myles released her self-titled debut album with the single, “Black Velvet,” a power ballad that became an international hit. For that performance she would win a Grammy Award in 1991 for Best Female Rock Vocal Performance. Another single, “Love Is,” was a prior single release in Canada, but was released after “Black Velvet” in America.

“Lover Of Mine” is a song about a couple with conflicting expectations regarding monogamy. The woman in the relationship wants to have her man to herself. However, he has at least one other woman with him which makes his partner feel heartbroken and dangerously jealous. The pair in the song are entangled. In the face of side involvements, the woman pleads “Please, set me free or give me your reason for tryin’ to keep it alive.”

An article on sugoren.com titled 9 Excuses Guys Come up with when They Have A Girlfriend But Still Meet Up with Other Girls, explores various motivations for a guy wanting to connect with other women while going steady. The excuses they list are:

2. He wants to ask women for some advice on marriage or get an idea for a gift to give his girlfriend

3. His relationship with his girlfriend is stable and he wants to feel a bit of a thrill

4. His masculine charm and senses get dull unless he hangs out with other women once in a while

5. He rediscovers his girlfriend’s charm when he hangs out with other women

6. He feels that he’s not loved by his girlfriend

7. He’s sure that his girlfriend is so into him and she wouldn’t leave him

8. He thinks it’s okay to cheat if he tells himself that he knows that his girlfriend is “my heart’s true desire”

9. He habitually thinks that “the grass is always greener on the other side” and convinces himself he’s more compatible with another woman than with his girlfriend

In the case of “Lover Of Mine” it’s not clear to the woman that her lover think’s she’s his true heart’s desire. He may be thinking that the grass is greener with one of the other women he is with, or women he looks at that pass by. From the lyrics, we can only guess why he isn’t setting his lover free, given his additional involvements. Whatever the motivation, he is interested in multiple involvements and the lover in the song wants him for herself. For most couples with different expectations, this isn’t a lasting or viable solution.

“Lover Of Mine” climbed to #2 on the Canadian RPM singles chart. It peaked at #2 in Hamilton, Ontario, and #10 in Vancouver. However, it missed the Billboard Hot 100.

Her next album, Rockinghorse, produced her biggest hit in Canada, “Song Instead of a Kiss,” which climbed to #1 on the Canadian RPM singles chart. Between 1989 and 1997 Alannah Myles released four studio albums. Her recording career went dormant until she released two more albums in 2009 and 2014. In America she is thought of as a one-hit-wonder. But in Canada, Alannah Myles managed to chart nine Top 40 hits on the Canadian RPM charts in six years.

On Canada Day, on July 1, 2011, local Toronto AM station, CFTR, reported “The crowd at Woodbine Park cheered loudly as Canadian rocker Alannah Myles was about to take the stage at one of the summer festivals taking place on Canada Day. However, the tone changed as the “Black Velvet” singer was carried on and helped seated onto the piano bench using two canes.  Although she seemed unable to move her head or neck, her voice sounded great as she played a few songs that really got the crowd rocking. Finally, Myles explained to the audience that she had overdone chiropractic treatments, having some 500 treatments over three years, and had suffered some severe spinal damage. She is unable to move her neck and head. Despite her physical ailment, Myles was in good spirits and put a show that had the crowd cheering.”

She still is available to appear in concert, though she has no current dates scheduled.

References:
Alannah Myles bio, Alannah Myles.com
Where Are They Now? Pop’s Class of 1990, Rolling Stone, New York, NY, July 10, 2012
9 Excuses Guys Come up with when They Have A Girlfriend But Still Meet Up with Other Girls, en.sugoren.com
Alannah Myles Shares Tragic Health News with Canada Day Crowd, CFTR, 680News.com