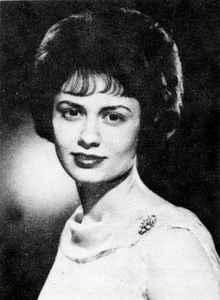 Gillian, Brian and John Russell were siblings who grew up in Vancouver and later Penticton, British Columbia. Their parents were musical. Gillian recalls, “We grew up in a very musical family. Our father played the piano, our mother had a lovely soprano voice.” In 1961, while they were in high school, they formed The Russell Trio. All three sang and the brothers both played guitar. They performed at Penticton High School and Teen Town. CFUN 1410-AM had a house band in the mid-’60’s named the CFUN Classics. The lead guitar player on the CFUN Classics was Brian Russell. His sister, Gillian, was a featured singer on the local Vancouver CBC late afternoon variety show Let’s Go. On the show’s debut on July 17, 1964, Gillian Russell sang a Doris Day hit from 1958 titled “Everybody Loves A Lover”.

Gillian Russell recalls a follow-up phone call from the CBC after she auditioned for Let’s Go. “When I auditioned in 1964, I was over the moon when they told me I had been accepted for the series, which lasted five years, and that I was going to be on the very first show. I think I let out a very large scream over the phone, to which I heard great laughter in the background. At that point I had no idea what an impact that show was going to have on my life.”

Gillian considers her major musical influences as Barbra Streisand, Dusty Springfield and Petula Clark. In 1965 Gillian Russell recalls being “picked out of all the singers on the “Let’s Go” show to travel to Toronto and perform in a CBC production “Show of the Week” alongside Gordon Lightfoot, Ian Tyson, and Burton Cummings. I will never forget what a wonderful experience that was for me . . . and I have their autographs.” She also appeared in 1966 a number of times on The Kenny Colman Show and sang “Yesterday” by The Beatles, a number of jazz standards and a medley of children’s songs.

At the end of 1966 Gillian Russell recorded a song titled “Man In The Street”. “Man In The Street” is a song about a man who is “out in the rain” and “walking alone.” He can’t believe he is on his own. He has memories of a love he once had. The vocals were reminiscent of Petula Clark. And while the lyrics were a little thin, they gave listeners a portrait of a person emotionally devastated from a break-up. It was not unusual to have songs on pop radio in the 1960’s with appeals to empathize, or sympathize, with the plight of someone. Jody Miller did the same with “Home Of The Brave” in 1965. In 1972 the R&B group The Dramatics had a Top 5 hit on the Billboard Hot 100 titled “In The Rain”. The song’s lyrics state that, because of a broken love relationship, the singer wants to go out and stand in the rain, though it may sound crazy. Clearly, the man in the street in Gillian Russell’s song wasn’t the only one with an impulse to head out into the elements when a relationship ended.

“The Man In The Street” was one of a number of songs concerned about individuals who were socially isolated. Another was “Eleanor Rigby” by the Beatles.

The “Man In The Street” climbed to #26 on the C-FUNTASTIC FIFTY survey and #2 on the CFUN ALL CANADIAN TOP TEN. However, her chart run in Vancouver was about the only city she got airplay. I hunch she got airplay on CKOK in Penticton, but I can’t confirm this. She had no other songs on the Vancouver pop charts.

Gillian Russell continued to be a regular singer on Let’s Go from 1964-69.

Gillian Russell’s brother, Brian, moved to Toronto in the 1970’s and worked steadily as a session player. He was a regular in the band for eleven seasons on The Tommy Hunter Show. Brian Russell also was among the personnel featured on Anne Murray‘s albums Let’s Keep It That Way, New Kind Of Feeling, I’ll Always Love You and Somebody’s Waiting. The first of these albums featured the #1 hit for Anne Murray in 1978 titled “You Needed Me”. The song won Murray a Grammy Award for Best Pop Female Vocal Performance in 1979. Brian Russell also toured with Roger Whitaker.

Gillian Russell was part of a Penticton-based band named Shine from 1977-1981. They played numerous times at the Peach Bowl and across the Okanagan Valley and Similkameen Valley. This included many private parties and weddings.

In 2018, the Daily Courier in Kelowna did a feature on songs about the Okanagan Valley. Writers Ron Seymour and James Miller wrote, “In 1980, Penticton singer-songwriter Gillian Russell was asked to write a song for the Penticton Peach Festival. Her manager Jim Moreing came up with the first line: “We’d like to welcome you to town.” She took it from there.” At the time Gillian Russell was “working at the old Woodwards department store as a cashier, and during her break she wrote the rest of the lyrics. Russell recalled “The words just seemed to flow out of me. I had a song ready and the Peach Festival committee loved it.” Russell got her song for the Penticton Peach Festival recorded in Kaleden at the Thieven Bros. studio. She appeared live to sing the song often on local Kelowna TC stations and at Skaha Beach and Okanagan Lake Beach, both in Penticton. The Daily Courier notes, “The song was played for years at the Peachfest parade and the City of Penticton later purchased the publishing rights to the song for $400.”

In a Penticton Herald article in 2018, James Miller wrote “Gillian has performed most her life, including 15 years in Victoria, and still plays weddings, seniors homes and funerals.”

2 responses to “Man In The Street by Gillian Russell”