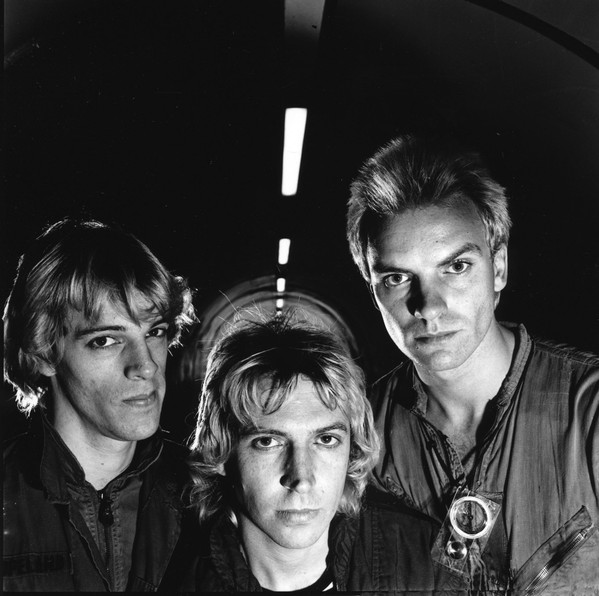 #96: Message In A Bottle by the Police

Gordon Matthew Thomas Sumner was born in Wallsend on Tyne, North Tyneside, Northumberland, England, in 1951. His mother was a hairdresser and his father was a milkman and engineer. When he was ten-years-old, young Sumner got introduced to Spanish guitar, when a family friend left it at the Sumner residence. After high school he was variously a bus conductor, building labourer and tax officer. He went to college and from 1974-76 was a public school teacher. Sumner performed jazz in the evening, weekends and during breaks from college and teaching, playing with the Phoenix Jazzmen, Newcastle Big Band, and Last Exit. He gained his nickname, “Sting,” due to his habit of wearing a black and yellow sweater with hooped stripes with the Phoenix Jazzmen. Bandleader Gordon Solomon thought Sumner looked like a bee which prompted the name “Sting.” According to Sting, in an interview with CBS Sunday Morning, “they thought I looked like a wasp, and they’d joke. They called me Sting. They thought it was hilarious…That became my name.”

In January 1977, Sting moved from Newcastle to London. It was in London that he met up with Steward Copeland and Henry Padovani to form the Police. (Padovani was replaced by Andy Summers at the end of August 1977).

Stewart Copeland was born in Alexandria, Virginia, in 1952. His father, Miles Copeland, was a CIA officer who was involved in covert operations to overthrow the governments of Syria (1949) and Iran (1953). In retirement, Stewart’s father told Rolling Stone in 1986 “my complaint has been that the CIA isn’t overthrowing enough anti-American governments or assassinating enough anti-American leaders.” The family moved to Beirut while Stewart was five. He started taking drum lessons at age 12 and was playing drums for school dances within a year.

Andy Summers was born in 1942 in a market town in Lancashire, England. Summers’s professional career began in the mid-1960s in London as guitarist for Zoot Money’s Big Roll Band which morphed into the acid rock band Dantalian’s Chariot. In 1968, Summers was briefly with Eric Burdon and the Animals on the Love Is album. He studied classical guitar for five years, and in the 70s toured as part of the band variously for Joan Armatrading, Neil Sedaka and David Essex. He also was in a band for some concerts with Mike Oldfield. Summers was briefly in a band called Strontium 90, before he was coaxed to join the Police.

In late 1978, the Police released their debut album, Outlandos d’Amour. From the album came “Can’t Stand Losing You”, a Top Ten hit in the UK, Ireland and the Netherlands. A subsequent release, “Roxanne”, was a number-one hit in Montreal and a Top Ten hit in New Zealand. In 1979 the Police won a Grammy Award for Best Rock Instrumental Performance with “Reggatta de Blanc”. In 1980, the Police won the again in the same Grammy category for “Behind My Camel”. While they were winning awards, the Police first came to Vancouver to perform live in concert at the Commodore Ballroom as part of their Police Around the World Tour on May 22, 1979.

In 1979 the Police released the album Reggatta de Blanc. The lead single from the album was “Message In A Bottle”. 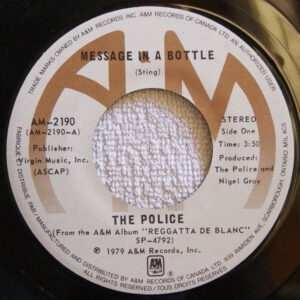 “Message In A Bottle” was written by Sting. The song tells a story about a castaway lost at sea. All alone on an island, he puts a message in a bottle which is “an SOS to the world.” A year passes and there is no response to his note. Then one morning he wakes up and sees a “hundred billion bottles washed upon the shore.” His takeaway: “Seems I’m not alone at being alone.” Rolling Stone magazine has listed “Message In A Bottle” at #65 on its list of 100 Greatest Guitar Songs of All Time.

“Message In A Bottle” was a number-one hit in Ireland, Spain and the UK, and a Top Ten hit in Australia, Belgium, the Netherlands and Canada. Another number-one hit for the Police in the UK and Ireland was “Walking On The Moon”. It also cracked the Top Ten in Australia and the Netherlands, and stalled at #11 in New Zealand. In the USA the single stalled at #74 on the Billboard Hot 100. “Message In A Bottle” peaked at #1 in Montreal, Toronto, #2 in Vancouver, #5 in Fredericton (NB), #10 in Ottawa (ON), and #17 in Richmond (IN).

On February 2nd and 3rd, 1980, the Police returned to Vancouver, performing at the PNE Garden Auditorium. This was in the weeks after “Message In A Bottle” had peaked at #2 in Vancouver. Later that year, the Police appeared in concert at the Pacific Coliseum on October 27, 1980, during their Zenyatta Mondatta Tour. The concert was held days after “Don’t Stand So Close To Me” began to chart in Vancouver on the way to its peak at #2, and “De Do Do Do, De Da Da Da” subsequently climbed to #4. Earlier in October 1980, the Police released their third studio album titled Zenyatta Mondatta. The debut single from the album was “Don’t Stand So Close To Me”.

In 1981 the Police released Ghost in the Machine. The debut single, “Invisible Sun” was a Top Ten hit in Ireland and the UK. But it was the second release, “Every Little Thing She Does Is Magic”, which topped the pop charts in Canada, Ireland, the Netherlands and the UK, and made the Top Ten in a half a dozen other nations.

The Police returned to Vancouver during their Ghost in the Machine Tour on August 31, 1982, at the Pacific Coliseum. This was after “Every Little Thing She Does Is Magic” had been a #3 hit in Vancouver, and “Spirits In The Material World” had also made the Top Ten on the Canadian West Coast.

A year to the date, the Police were on their Synchronicity Tour and gave another concert at the Pacific Coliseum on August 31, 1983. At this point, they were fresh off their local number-one hit single “Every Breath You Take”, and about to top the Vancouver charts for three weeks in October with “King Of Pain”. A final Top Ten international hit for the Police was “Wrapped Around Your Finger”. It was a number-one hit in Ireland, but the song stalled at #26 on the CKLG chart in Vancouver.

According to Sting, appearing in the documentary Last Play at Shea, he decided to leave the Police while onstage during a concert of 18 August 1983 at Shea Stadium in New York City because he felt that playing that venue was “[Mount] Everest.”

In June 1985 Sting released his debut solo album The Dream of the Blue Turtles. His debut single release from the album, “If You Love Somebody Set Them Free”, peaked at #2 in Vancouver (BC), #3 on the Billboard Hot 100 in the USA, #7 in Italy, but stalled at #26 in the UK. A second single release, “Love Is The Seventh Wave” didn’t chart in Vancouver, but cracked the Top 20 on the Billboard Hot 100 in the winter of 1985-86. As well, “Fortress Around Your Heart”, charting to #8 on the Hot 100, did not chart in Vancouver. However, the fourth single release from The Dream of the Blue Turtles, “Russians”, made the Top 30 in Vancouver in early 1986.

After the Police broke up in 1986, Stewart Copeland went on to compose soundtracks for over a dozen films. Copeland has also been a session musician on many recordings, including “Red Rain” by Peter Gabriel.

In the fall of 1987, Sting released his studio album …Nothing Like the Sun. From the album he released “We’ll Be Together”, a #4 hit in Vancouver in the winter of ’87. A second track from the album, “Be Still My Beating Heart”, also appeared on the pop chart in Vancouver, but sprinted to #2 in Montreal. A third single from the album, “Englishman In New York” missed the pop charts in Vancouver, but charted in Montreal. It was also an international hit where it peaked at #12 in Ireland, #13 in the Netherlands, and #16 in Belgium. A subsequent single, “Fragile”, missed the Vancouver pop charts, but shot to #11 in Belgium and #12 in the Netherlands. On July 18, 1988, Sting gave a concert at the BC Place Stadium in Vancouver.

In 1991 Sting released his third studio album, The Soul Cages. The lead single, “All This Time”, became a Top Ten hit in Canada, Denmark, Finland, Italy, Norway, Portugal, the USA, and Vancouver. On August 12, 1991, Sting appeared in concert in Vancouver at the Pacific Coliseum.

In 1993 Sting released his album Ten Summoner’s Tales. The debut release from his album was “If I Ever Lose My Faith In You“. Sting returned to perform in concert at the Pacific Coliseum in Vancouver on May 4th, 1993. Soon after, his single “Fields Of Gold” began its chart run into Vancouver’s Top Ten on CKLG.

As well, in the 1990s Sting was heard in movie theaters singing a duet with Eric Clapton in 1992 titled “It’s Probably Me” in Lethal Weapon 3, and with Bryan Adams and Rod Stewart on “All For Love” in the soundtrack for The Three Musketeers. The single became the number-one song of the year in Canada in 1994, and also topped the weekly pop charts in over a dozen other countries in 1993-94. In the mid-90s, Sting released a Fields Of Gold: The Best of Sting.

On May 27, 28 and 30, 2007, Sting appeared in a reunion tour with the Police at General Motors Place in Vancouver. Six years later, on June 2, 2010, Sting gave a concert in Vancouver at the Centre for Performing Arts. Then in 2011 Sting appeared for a three-night-stand at the Queen Elizabeth Theatre on December 8th, 9th and 10th. Sting returned to Vancouver on February 1, 2017, at the Commodore Ballroom.

References:
Robert Eringer, “Secret Agent Man: No wonder Miles Copeland’s kids formed the Police,” Rolling Stone, January 16, 1986.
Kristine McKenna, “Sting: The Rolling Stone Interview,” Rolling Stone, September 1, 1983.
Elizabeth Day, “Interview: The Thing About Sting,” Guardian, September 25, 2011.
Anna Puka, “I wish I’d been nicer to Sting: Stewart Copeland talks about life after The Police,” May 27, 2014.
“Andy Summers: ‘One of the things I loved about playing in The Police was that it was all guitar all the time! But it needed someone like me to fill that out,'” Guitar World, March 17, 2022.
“C-FUN Top Thirty,” CFUN 1410 AM, Vancouver, BC, January 12, 1980.