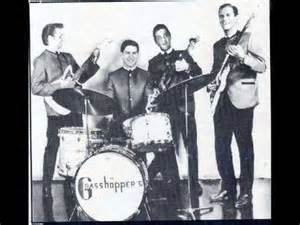 According to AllMusic.com music critic, Jason Ankeny, The Grasshoppers were a rock ‘n roll band from Cleveland who formed in 1962. There were several lineup changes and Benjamin Orzechowski joined the band in 1964 and became the lead singer. Ben Orr, who was born in 1947, went on to be a lead singer in the New Wave band, The Cars. Jeff Niesel, of Rolling Stone Magazine writes that members of the Grasshoppers Fan Club included Diane Akins, the president of the club. She remembers meeting Ben Orr when the Grasshoppers were an opening act when the Beach Boys performed in Cleveland in November, 1964. Orzechowski was given the nickname at the time “11 letters” cause his surname was so long. Though AllMusic fails to mention him, I received a comment from Robin Marie Ouellette, the daughter of Louis Pratile. She confirmed that her dad was a member of the Grasshoppers. Dante Rossi and John Matuska were also prominent members of the band.

According to Adam Sweeting of The Guardian, Ben Orr “fronted the house band of the TV rock show Upbeat, and was leader of a local group, The Grasshoppers.” Upbeat was an American Bandstand style show in the Cleveland region. On one show the Grasshoppers appeared on Upbeat with Paul Anka as the special guest. In 1965 the Grasshoppers recorded “Mod Socks”. In Vancouver the tune peaked at #11, while in Cleveland it peaked at #14 on WHK-AM, according to the ARSA website. One of the writers that penned “Mod Socks” was Carl Maduri. He was the owner of Sweet City Records in Beachwood, Ohio, a suburb of Cleveland. The other co-writer was Grasshoppers band member and lead guitarist, Louis Pratile.

Mod was a subculture that began in the United Kingdom in the 1960s and spread, in varying degrees, to other countries. It continues today on a smaller scale. Focused on music and fashion, the subculture has its roots in a small group of London-based stylish young men in the late 1950s who were termed modernists because they listened to modern jazz, although the subculture expanded to include women. Life Magazine did a eight-page article on mod fashions in their issue published on May 13, 1966. Life staff writer sub-headlines included “Carnabying’ And A Stroll in Chelsea Show the Latest in Nattiness,” “It All Started in London and it’s Making a Smash Here” and “Revolt in Men’s Wear – Gawdy and Very Gear: The Guys Go All Out to get Gawked At.”

Significant elements of the mod subculture included fashion (often tailor-made suits); music (including soul, ska, and R&B); and motor scooters (usually Lambretta or Vespa). The original mod scene was associated with amphetamine-fuelled all-night dancing at clubs. The Kinks song “Dedicated Follower of Fashion” from 1966 commented on the mod subculture. It was referred to as a “cult” in the British press and represented a rebuke of the prejudices of traditional British society. By drawing on fashion styles from Italy, Jamaica, Scotland, America and elsewhere, mods sought to free themselves from the rigors of the British class-based society, as they wore more casual styles of clothing with an International flair.

In England during the early to mid 1960s, mods often engaged in brawls with rockers, which led to many news articles in the UK  describing the “moral panic” over mod and rocker riots. In the mid-to-late 1960s, the conflicts between mods and rockers subsided, as several rock bands, including The Who and the Small Faces adopted a mod style.London became synonymous with fashion, music, and pop culture in these years, a period often referred to as “Swinging London.” The Grasshoppers from Cleveland were attuned to pop-rock fads and culture across the Atlantic and its’ spread to North America. And so their song, “Mod Socks” aspired to benefit from the fad. It would seem that in the spring of 1965 listeners to CFUN wanted to know who wore mod socks. According to the Grasshoppers lyrics even their brother wears “mod socks.” In that case they would likely have been paisley. The Grasshoppers had one other minor hit in the spring of 1965 called “Pink Champagne (And Red Roses)”, which peaked at #20 in Cleveland on KYW-AM, according to the Airheads Radio Survey Archive website.

Ben Orr met Ric Ocasek in Cleveland when Orr was with the Grasshoppers. They played in a number of bands and formed The Cars in the late 70’s. On the strength of The Cars hit, “Drive”, Orr appeared on the U.S.A. for Africa ensemble contributing vocals for Africa benefit song “We Are The World”. Orr died in 2000 at the age of 53 of pancreatic cancer. Ric Ocasek died in 2019.

The Grasshoppers split, it seems, by 1967. It may be possible that Louis Pratile moved to Toronto to play with a band called A Passing Fancy.

One response to “Mod Socks by The Grasshoppers”