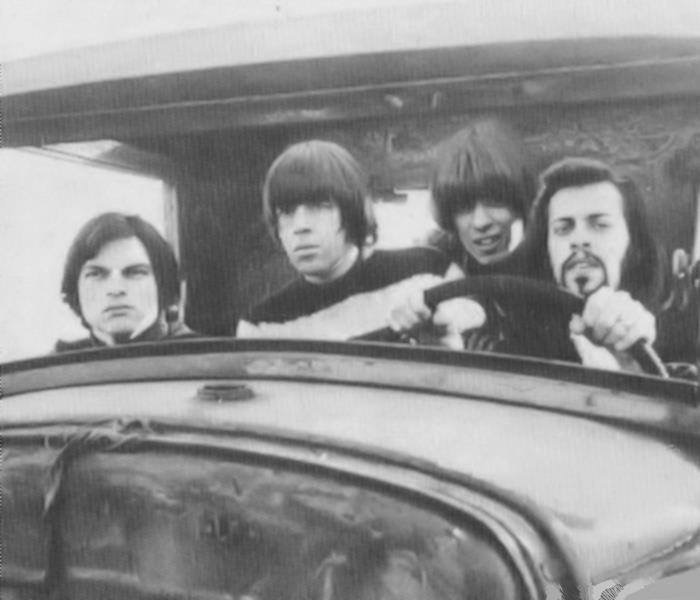 The Seeds were a garage rock band based in Los Angeles that formed in 1965. They coined the phrase, “Flower Power,” and are regarded as pioneering a sound that would later evolve into 70’s punk rock. The band’s leader, Sky Saxon, was born in Salt Lake City. The Seeds were formed in 1965 and the band became a regular act at the LA club, Bido Lito. Keyboardist player, Daryl Hooper, was among the first to make use of the keyboard bass, a signature of the Seeds’ “sound.” Jan Savage and Jeremy Levine were the bands guitar players and on drums was Rick Andridge. Sky Saxon was on lead vocals and bass. However, on the Seeds recordings, Saxon did not play bass. Session musician, Harvey Sharpe, was usually given credit as personnel for bass in the recording studio. “Mr. Farmer” was written by Sky Saxon and describes the story of a man who becomes dissatisfied with city life and moves to the country, buys five acres, and spends time watering and harvesting his crops. He isn’t a conventional farmer who wears regular farmer clothes but instead wears “seedy” clothes. In the song the singer describes the farmer as wanting green seeds to come alive. While there are green seeds that grow into crops that produce tomato, okra, fennel, pumpkin seeds and tobacco, there are also green seeds that grow marijuana. In “Mr. Farmer” the kind of seeds that are being planted yield a crop that grows like a big stalk up through the sky. This didn’t remind radio programmers of tomato, okra or pumpkin seed harvests. On first listen, Saxon lyrics could be taken to be a song in praise of industrious farmers and a return to the land. However, the song was suspected of actually being a tribute a marijuana growers. Consequently, the song was banned on many radio stations, except in California, Seattle and Vancouver.

In the “Monkees On Tour” episode of the TV show The Monkees, around eight minutes into the episode a promotional copy of “Mr. Farmer” is shown being played by Phoenix radio station KRIZ when the Monkees visit the station. In his book, Riot On Sunset Strip: Rock ‘N Roll’s Last Stand in Hollywood, Dominic Priore describes the keyboards on “Mr. Farmer” as similar to early Pink Floyd. The song was featured in the rock ‘n roll themed movie, Almost Famous, directed by Cameron Crowe from 2000.

The same month as “Mr. Farmer” began to climb the charts in February, 1967, a news story from the United Kingdom linking rock ‘n roll acts with illegal drugs was in the headlines across North America. The London-based The Daily Mail had been on an editorial campaign for some years vilifying pop stars for decadence and drug use. On February 12th, the campaign reached its zenith with a police raid on Redlands, Rolling Stone band member Keith Richard’s house in West Sussex. Tipped off by the Sunday scandal sheet, The News of The World, the officers discovered a small, stoned party in progress that included a young woman, – tantalisingly referred to in press reports as ‘Miss X’ – “stark naked under a fur rug” and allegedly under the influence of marijuana. At the trial, in June, the judge directed the jury to disregard Marianne Faithful’s evidence that she hadn’t been smoking pot at the time. The judge sentenced Keith Richard to a whole year in prison, plus £500 costs, for allowing his house to be used as a venue for smoking what the law quaintly referred to as ‘Indian hemp’. Subsequently, Richard only served one night in jail which inspired the Rolling Stones to compose their single “We Love You“. With this story hitting the headlines, many radio stations didn’t want to be perceived as being permissive about giving airplay to rock ‘n roll songs that were plausibly lauding the harvesting of marijuana.

In the USA the California band, The Grateful Dead, were arrested in a drug bust that October. The San Francisco Chronicle ran a front page headline “Pot Arrests: Haight Roundup, Cops Raid Pad of Grateful Dead,” on October 3, 1967. The opening paragraph read: Eleven residents of 710 Ashbury St., including two band members, two managers and several women living with the band, were handcuffed together and hauled away by police on Oct. 2, 1967. San Francisco narcotics officers, who took more than a pound or marijuana and hashish from the residence, said they were working off a tip from an informant. Band lawyers said the group was unfairly targeted. Most of the defendants pled guilty to lesser charges and paid a small fine in 1968.

Meanwhile, on July 24, 1967, Paul McCartney funded an advertisement in The Times of London. The ad featured 64 prominent members of British society, including Beatles manager, Brian Epstein, arguing for the legalization of marijuana. None of the Beatles names were among the 64 persons among the signatories. However, the appearance of the advertisement led to a debate about existing marijuana laws in the UK a week later. The full page ad included a quote from Dutch philosopher, Baruch Spinoza, and a lot of text, including these words:

The law against marijuana is immoral in principle and unworkable in practice.

“All laws which can be violated without doing anyone any injury are laughed at. Nay, so far are they from doing anything to control the desires and passions of man that, on the contrary, they direct and incite men’s thoughts toward these very objects; for we always strive toward what is forbidden and desire the things we are not allowed to have. And men of leisure are never deficient in the ingenuity needed to enable them to outwit laws framed to regulate things which cannot be entirely forbidden. …He who tries to determine everything by law will foment crime rather than lessen it.”- Spinoza

The herb Cannabis sativa, known as ‘Marihuana’ or ‘Hashish’, is prohibited under the Dangerous Drugs Act (1965). The maximum penalty for smoking cannabis is ten years’ imprisonment and a fine of £1,000. Yet informed medical opinion supports the view that cannabis is the least harmful of pleasure-giving drugs, and is, in particular, far less harmful than alcohol….

In the cultural war over marijuana use the TV show, Dragnet, offered a grim assessment of its consequences in a November 12, 1967, episode called “The Big High.” A couple in a upscale LA residential neighborhood are smoking pot on a Thursday night. Viewers are told that a joint costs between 50 and 75 cents (US). Jack Webb and fellow cops bust the couple and notice an empty crib in the living room. An officer asked them “Don’t you know where your baby is?” Tragedy strikes when the mother, coming out of her pot-induced stupor, remembers that her baby is in the bath. The mother finds her baby drowned in the bathtub. The father gets probation for involuntary manslaughter, and the mother (due to the tragic death of her daughter) is placed under the supervision of the State Department of Mental Hygiene. The 23 year old dad brags that one day pot will be available in stores just like liquor. The episode concludes: “The story you have just seen is true. The names were changed to protect the innocent.”

In Canada in 2018, the federal government is about to legalize the sale of marijuana. June 2018 headlines, in magazines such as MacLean’s, warn new health research suggests consumption of marijuana can trigger psychotic episodes for seven percent of juveniles. MacLean’s cites a study in JAMA Psychiatry. Police are concerned about driving under the influence after smoking pot, among other things. Although their has been passage of Bill C45 on June 7, there are still further hurdles to go before smoking pot is legal in Canada.

The Seeds released just one other single that would break into the Billboard Hot 100 in June 1967 titled “A Thousand Shadows”. The release climbed to #72 in the USA and #26 in Vancouver. Several more releases augmented their repertoire in concerts.  These include “900 Million People Daily (All Making Love),” “The Wind Blows Your Hair”, “March of The Flower Children”.  They appeared before 18,000 fans at a concert at the Hollywood Bowl that year. The band split up in 1972.

Years later, punk rocker Iggy Pop said in a press interview, “I’ve never liked the idea of putting on some music before sex, but if I was gonna put on some music to have some sex with, I’d put on The Seeds.” Many recording artists have covered material by The Seeds including Frank Zappa and the Strawberry Alarm Clock. Among the groups that credit The Seeds as an influence are the 80’s group The Bangles.

In 2003 the Seeds reformed with Sky Saxon and a mix of original and new bandmates. Saxon died of heart failure in 2009. Original bandmates, Daryl Hooper, Jan Savage and Don Boomer (Seeds drummer from 1968) have toured with newer members of the band in recent years. In 2014 a documentary about The Seeds, Pushin’ Too Hard, was released and continues to be shown on occasion at art movie houses.