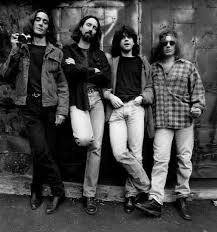 The band’s second album was self-titled, and with its release in 1986 54-40 began to get significant airplay on college radio. Warner Reprise stayed with the alternative rock band through to their fourth studio album release, Fight For Love. But the lack of a breakthrough into the American market led to the record company dropping 54-40 after a compilation album came out in 1991.

However, 54-40 moved over to Columbia Records and had their best commercial success with Dear Dear. “Nice To Luv You” climbed to #11 on the CKLG pop chart in Vancouver in July of ’92. The next single release from the album was “Music Man”. “Music Man” is a snapshot of a high school graduate who has a dream of being a music man. The music man meets two cats in an alley way. The cats are slang for other music types, and they are singing in the alley. The cats and the music man get together and now they have to rehearse before they perform, “one check you, one check me.”