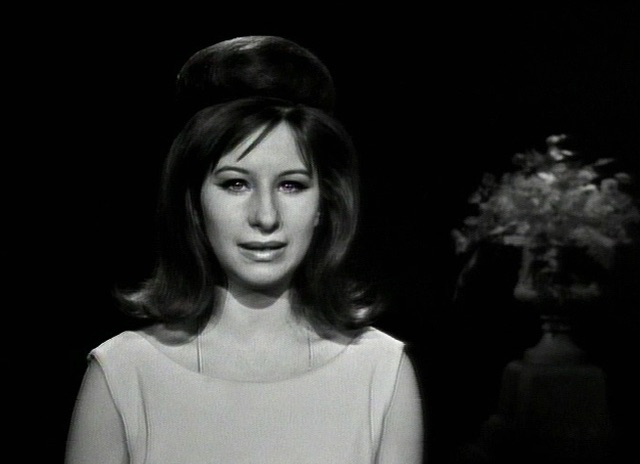 #1407: My Coloring Book by Barbra Streisand

Barbara Joan Streisand was born in 1942 in Brooklyn, New York. A year after she was born her 34-year-old father died of complications from an epileptic seizure, and a morphine injection given to address the situation. She had an older brother named Sheldon who was born in 1935. Barbara started her schooling at a Jewish Orthodox Jeshiva. Her mother remarried to Louis Kind in 1949, and with that marriage Barbara gained a half-sister named Roslyn. When she was nine years of age, she auditioned with MGM Records, though this didn’t result in a record deal. While attending Erasmus Hall High School she got to know a member of a choral club named Neil Diamond.  When she was 14, Streisand saw the Broadway play The Diary Of Anne Frank. After seeing the play she knew she wanted to pursue acting. In the summer of 1957, Barbara Streisand got small acting parts in Picnic and Desk Set at the Playhouse in Malden Bridge, New York, a small town southeast of Albany. In 1958 she appeared in a play called Driftwood, opposite a new actress named Joan Rivers.

Aged 16 and then living on her own, Streisand took various menial jobs to have some income. During one period, she lacked a permanent address, and found herself sleeping at the home of friends or anywhere else she could set up the army cot she carried around. Ain 1960 Streisand got work as an usher at the Lunt-Fontanne Theater for The Sound of Music. In that capacity she learned that the casting director was auditioning for more singers. And for the first time she sang in an audition. The casting director felt she was not right for the part. However, he encouraged Streisand to start including her talent as a singer on her résumé when looking for other jobs.

In late spring 1960, Barbara’s boyfriend Barry Dennen encouraged her to enter a talent contest at an upscale gay club called The Lion in Greenwich Village. In order to enter the talent contest, she had to audition for the manager of the club, Burke McHugh. As he related in his biography, “I used to audition the contestants, along with my male pianist, every Monday morning. We’d select four of them to come back for the contest … We were having auditions out in the bar, in the front room … and this girl came along wearing a pair of dungarees, with her hair down to her shoulders … So we brought her out into the front room. I heard about two lines come out and I said to the piano player, ‘Oh, my God, this girl is unbelievable!’ So I said to her, ‘Hold it a minute. Let’s go in the back room with the grand piano.’ So we moved into the back room, where there was a microphone. I turned the mic on and asked her her name. She said her name was Barbra Strinberg. So I said, ‘OK, Miss Strinberg, do a number for us.’ When she sang, the piano player looked at me and I looked at him. We just couldn’t believe what we were hearing.”

The talent contests at were held at The Lion each Tuesday and started at 11 p.m. Dennen remembers that it was a packed evening. Streisand competed against a couple of comics and a jazz singer. Accompanied by a pianist, she sang “A Sleepin’ Bee”. The reaction was “utter silence. There was a breathless pause. The audience was dead still, frozen in time […] and then suddenly the whole room crashed into applause, an eruption of yells and whistles, ear-shattering stomping and screaming. They wanted another song!” She launched into the second number she’d rehearsed titled “When Sunny Gets Blue”. Dennen recalls that Streisand walked through the crowd with the microphone. She won the $50 prize, and was invited back the next week to compete again against a gay comedian and an eccentric singer named Tiny Tim. Streisand performed at The Lion on Mondays and Saturdays in June and July 1960. While she was performing at The Lion, Streisand dropped her second “a”, changing her name from Barbara to Barbra.

In September 1960, Barbra Streisand began to appear as an opening act for comedian Phyllis Diller at the Bon Soir nightclub. She earned $125 a week. On April 5, 1961, Barbra appeared on The Tonight Show, hosted at the time by Jack Paar. The guest host that night was Orson Bean. Phyllis Diller was also a guest on the show and called Barbra “one of the great singing talents in the world.” Later in 1961 Streisand became a regular on a variety show called PM East/PM West hosted by Mike Wallace and Joyce Davidson. Next, she was cast in her first role on Broadway in Another Evening With Harry Stoones, in which she sang two solos. That year she also appeared at the Village Vanguard jazz club in Greenwich Village.

On May 29, 1962, Barbra Streisand appears on The Gary Moore Show and sang four songs, including  a slow version of the 1930s tune “Happy Days Are Here Again”. The song became her signature song in these early years, and was made into her first single recording. Next, she got a role in the Broadway musical I Can Get It For You Wholesale, and played the secretary, Miss Marmelstein, opposite a young actor named Elliott Gould, who played the lead as businessman Harry Bogen. The play was set in 1937 in New York City’s Garment District. Streisand and Gould became romantically involved and latter married. At age 19, Barbra Streisand was nominated for a Tony Award for Best Performance by a Featured Actress in a Musical. Groucho Marx hosted The Tonight Show on August 21, 1962, and told Streisand  that twenty was an “extremely young age to be a success on Broadway.” The new Tonight Show host, Johnny Carson, invited Barbra Streisand to appear on his show a half a dozen times in 1962-63.

Barbra Streisand made her first appearance on The Ed Sullivan Show on December 16, 1962. On the show the 20-year-old sang “My Coloring Book”. 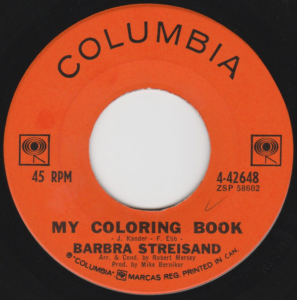 “My Coloring Book” was written by Kander and Ebb. John Harold Kander was born in Kansas City, Missouri, in 1927, and raised in a Jewish family. He served in the Korean War and studied music at Oberlin College and Columbia University. In 1957 he became the rehearsal pianist for the original Broadway run of West Side Story. In 1960 he wrote the dance arrangements for the Broadway English version of the French musical Irma la douce. Then, in 1962 Kander wrote the score for the Broadway musical A Family Affair, starring Shelley Berman and Eileen Heckart. That year John Kander met Fred Ebb and the two wrote their first song together: “My Coloring Book”.

Fred Ebb was born in 1928 in Manhattan. Also raised in a Jewish family, Ebb bronzed baby shoes for a living in the early fifties and also worked as a trucker’s assistant and at a hosiery company. Meanwhile, he pursued his dreams by moonlighting as a songwriter. In 1949 he wrote “Don’t Forget” recorded by country singer Eddy Arnold. Ebb he co-wrote the lyrics for the musical revue Baker’s Dozen in 1951. In 1953 Ebb co-wrote “Heartbroken” which was recorded that year by Judy Garland. During the ’50s Ebb wrote songs recorded by Les Baxter, Mindy Carson, the Mills Brothers, Kay Starr, Lionel Hampton, Jim Lowe, Eartha Kitt, June Valli, Georgia Gibbs, Teresa Brewer, Carmen McRae, a very young Petula Clark, Dean Martin and Nat King Cole.

In 1960 Fred Ebb wrote songs for the Broadway musical From A to Z, starring Woody Allen.

“My Coloring Book” is a song that uses a coloring book as a metaphor for a relationship that ended. Instead of using the coloring book, like children do in an elementary school art class to draw flowers, animals, sea creatures or pastoral scenes, the narrator invites the listener to “color me.” He eyes are colored “grey” when “he walked away.” Her heart is colored “blue,” now that she’s discovered her man wasn’t faithful in her relationship. Now that he’s gone, she instructs that her arms be colored “empty now,” leaving them blank. The beads around her neck are colored “green” in response to her feelings of jealousy/envy toward the woman who “came between” the married couple. At the end of the song, the narrator instructs those who are trying to finish their coloring book to color the ex-husband “gone.”

Kitty Kallen also made a recording of the song in the pop-country genre, complete with backing harmonica. Kallen’s version of “My Coloring Book” peaked at #1 in Monroe (LA), #3 in Dallas, #4 in Cedar Rapids (IA) and Trenton (NJ), #5 in Erie (PA) and Louisville (KY), #6 in San Diego, Denver, Buffalo and Cincinnati (OH), #7 in Minneapolis/St. Paul, Philadelphia and Chester (PA), #8 in Dayton (OH), Newport News (VA), Boston and Chicago. Kitty Kallen edged out Sandy Stewart’s recording, reaching #18 on the Billboard Hot 100.

All three versions of “My Coloring Book” climbed up the pop chart on CFUN in Vancouver (BC). But it was Barbra Streisand’s version that was making a rare Top 40 appearance in a local radio market. Streisand’s “My Coloring Book” peaked at #1 in Calgary (AB), #8 in Toronto and Chester (PA), #9 in Winnipeg (MB) and #19 in Vancouver (BC). Otherwise, her version was passed over by DJ’s who gave either Kitty Kallen or Sandy Stewart airplay.

While “My Coloring Book” was still on the CFUN chart in Vancouver in February 1963, Barbra Streisand released her first album, The Barbra Streisand Album. The album won three Grammy Awards at the 1964 Grammy ceremonies for Album of the Year, Best Album Cover (Other Than Classical) and Best Female Vocal Performance. In the latter category Streisand beat out Eydie Gorme, the Singing Nun, Peggy Lee and Miriam Makeba. And in 1964 Barbra Streisand also made the covers of Time and Life. She also sang on the Judy Garland Show.

Barbra Streisand also directed several films she also acted in and produced. These include Yentl and Prince Of Tides. The former received five Academy Award nominations and the latter received seven nominations. Yentl earned an Academy Award for Best Adaptation Score, and Golden Globe Awards for Best Director and Best Motion Picture – Musical or Comedy. And Nick Nolte won a Golden Globe Award for Best Actor in Prince Of Tides. In 1997 she received an Academy Award nomination in the Best Original Song category for “I Finally Found Someone” from The Mirror Has Two Faces. Over the years Barbra Streisand has performed in 19 films, her most recent – The Guilt Trip – was in 2012. In addition, she has also appeared in 17 television specials.

Barbra Streisand has also toured internationally. She performed in Vancouver (BC) on October 29, 2012, at the Rogers Arena.

2 responses to “My Coloring Book by Barbra Streisand”