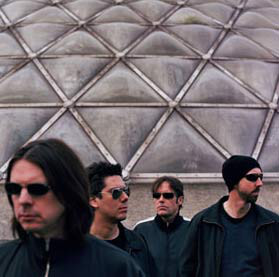 Warner Reprise stayed with the alternative rock band through to their fourth studio album release, Fight For Love. But the lack of a breakthrough into the American market led to the record company dropping 54-40 after a compilation album came out in 1991.

However, 54-40 moved over to Columbia Records and had their best commercial success with Dear Dear. The first single from the album was “Nice To Luv You”.

“Nice To Luv You” climbed to #11 on the CKLG pop chart in Vancouver in July of ’92. The song is a celebration of a romantic connection between two people who are a good fit for each other. The singer concludes it’s just nice to luv you. Months later “She-La” climbed to #18 in Vancouver (BC). The third single release from the album was “Music Man”, which climbed to #10 on Vancouver’s CKLG.

54-40’s next album was named after the venue where they first performed in 1981, Smilin’ Buddha Cabaret. The album contained their biggest hit single to date, “Blame Your Parents”. The song peaked on the Canadian RPM singles chart at #13 in 1994. Another single from the album, “Ocean Pearl”, became one of the signature songs for 54-40.